Got a wild bird that won’t stop pecking at your window? Or, do birds tend to crash into certain windows of your home? Either way, these tips will help stop the behavior without harming the bird.

It’s that time of year—wild bird breeding season—when you may hear a bird pecking away at your window. Or, birds crash into windows in their flight path.

When they peck, they aren’t trying to tell you that your feeder is out of sunflower seeds—although some birdwatchers say birds do this as well.

The most likely reason for this behavior is the aggressive, territorial nature of some birds—especially during nesting season—and the reflections in your windows.

Birds in flight see the reflection of trees and sky in windows—not a hard, glass barrier, and fly right into them. This kills hundreds of millions of birds every year in the United States alone.

When resting, a bird sees its own reflection in the glass, perceiving a rival bird. And that means it’s time to defend their territory.

The threatened bird may peck, scratch, and use intimidating postures to get this rival bird to go away. But the poor guy has met his match!

Perhaps some figure it out or give up after a few hard pecks, but for others, the aggression can escalate and they are not backing down.

I’ve had numerous emails from readers over the years sharing stories of birds who fixate on a particular house window or car mirror and persist for days or weeks. It’s not fun!

Robins are well known for this, and some cardinals. But it’s not just them. Bluebirds, sparrows, goldfinches and many others have been known to attack their reflections.

And, while it’s not as harmful as flying into a window, the incessant tapping is distressing for everyone involved.

Let’s look at ways to decrease the likelihood of these behaviors.

If you’re looking for a magic solution, there isn’t one: you may need a combination of the suggestions listed below.

If nothing else, make kind choices and be patient. The problem is human-made and the birds are just doing what comes naturally to them.

But there are some things you can try to change the circumstances which in turn may get the bird to give up and move on.

Temporarily covering up the window can work.

Not particularly. Decals are no different than anything else covering the window: you need to cover most of the window to get rid of the reflection.

3Change the Appearance of the Window

These tips can also prevent birds from flying into windows:

I’ve also wondered if a photo cutout of a cat face would work. I know it sounds silly but it would be interesting to try.

4Remove or Cover the Perch

Block or cover whatever the bird is using to sit by the window so it is no longer comfortable or easy to sit there.

Again, be kind. Never do anything to harm the animal. Just make it inaccessible or inconvenient.

Changing up the environment nearby may also help:

This could be temporary or permanent.

In rare cases, the behavior can go on a long time, but in most cases, it’s a brief but intense situation.

Keep calm, respect the bird’s welfare and see what you can do to change the circumstances which in turn should stop the pecking.

PDF Format | About This Ebook 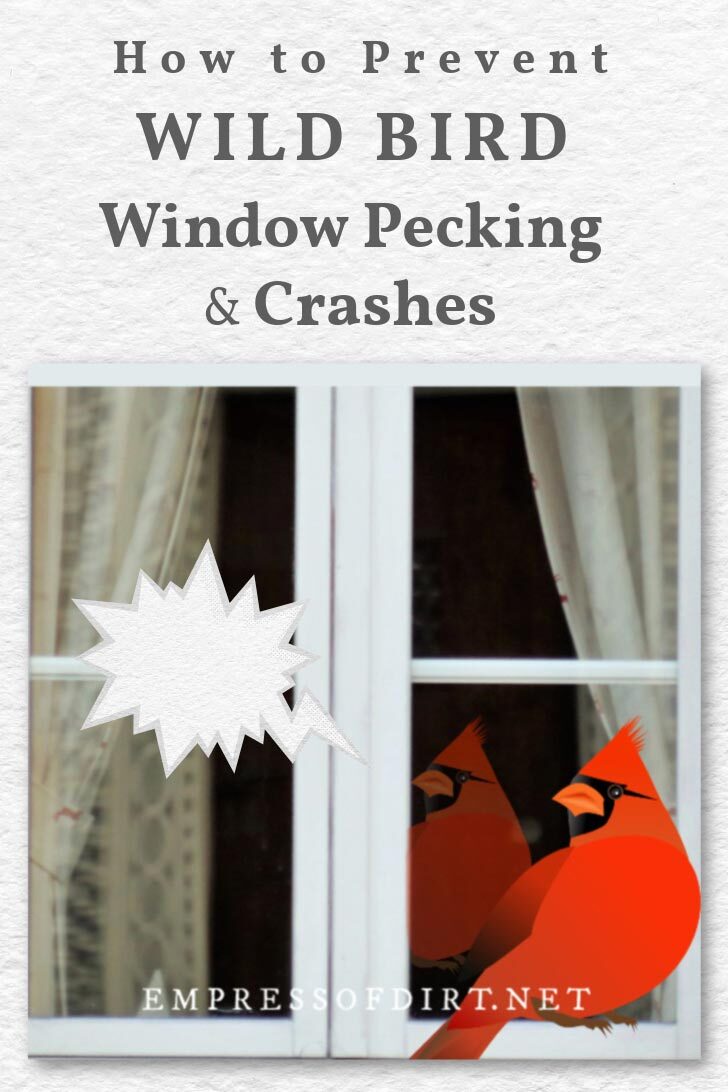