This one small addition to any nesting box will help prevent numerous predators from entering. Use these tips to make your own.

It’s not easy out there!

There’s always threats to the survival of any wildlife, and the food chain is not pretty to observe when you get attached to particular animals.

I adore the wrens in my garden and it was amazing to see how much they have to contend with during the nesting phase.

I built this nesting box (free wren nesting box instructions here) in the spring, just in time for a mating pair to build a nest and lay their eggs inside.

They are such delightful little birds—and so tiny! When the young ones have fledged but are still under the parent’s care, you can find whole groups of them hopping about in the garden. It’s very sweet.

But wow, once they are nesting and the eggs have been laid, the predators are everywhere and the mating pair are on guard.

The male wrens pack a good number of decibels into their calls! Some say it sounds like teakettle teakettle as they repeat themselves over and over again. All I know is, they are loud for such tiny birds and their calls tend to dominate in the garden. You can hear it in the first video (below).

I placed my wildlife trail cam near the box to catch the daily activities. It’s an automated camera with motion detection.

Want to protect the birds? Know the difference between decorative birdhouses and true nesting boxes so you can provide what they need.

One Small Thing That Stops Predators

First, the pleasant stuff. Watch below to see the wren bringing food for the babies. They average between 3 and 7 eggs in each brood and mate up to 3 times per year.

Cute, right? And such characters. But a little too attractive to the bigger guys on the food chain.

See that extra little block of wood at the entry to the nesting box? That’s a predator guard (also called a baffle block).

Simply by adding this piece of wood, you can thwart a number of predators who would otherwise be able to climb or reach in. Not many commercially-manufactured nesting boxes seem to have this feature but it’s a smart thing to add if you’d like to see your birds survive these vulnerable weeks.

Predator #1
Watch as this starling tries to get in the box. You can see how the baffle block really does make it impossible for him to get inside:

I didn’t think the BirdCam was set to go off at night (because I don’t really like the flash disturbing the neighbors), but I happened to get several images and short videos of a raccoon on the fence by the nesting box.

The footage is way too dark to share but upon zooming in and examining it, I can tell the raccoon stood on the box and tried to reach inside several times.

I’m hoping the predator block prevented it from grabbing the babies.

It was slightly comical to see the chipmunk run for his life up the nearby maple tree with the male wren riding his back and pecking at him.

When properly designed and located, nesting boxes can give birds a survival advantage as well as providing entertainment (and drama!) for spectators like me.

Predator #3
Chipmunk! I didn’t get a photo but I actually saw the chipmunk try to climb in the box while the mother bird was inside. The male wren came down from the tree and attacked the chipmunk.

Growing Up
A few days later I noticed several teeny tiny wrens in the garden, so I’m hoping these are the newly fledged babies from this group.

It will be interesting to see if they choose to reuse the box again this season before the cold weather sets in. I’m sure the raccoon is hoping so.

Related: How to Choose Wildlife Houses for Birds, Bees, Bats, and Owls 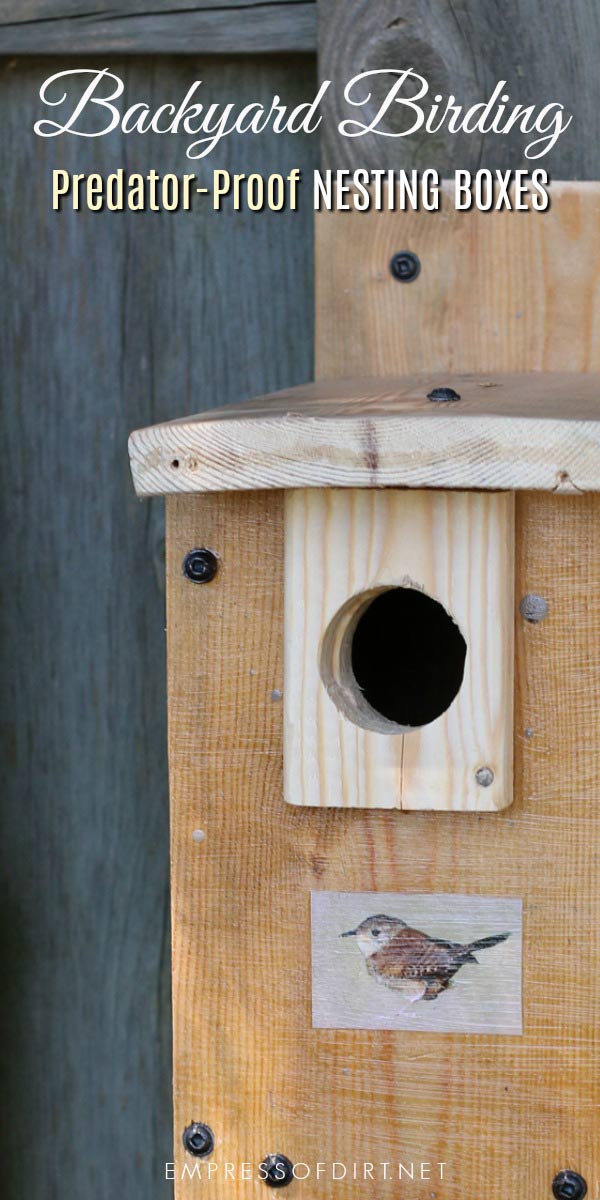