If you have stubborn weeds growing between bricks on a patio or a stone pathway, a steam machine is an alternative solution to applying herbicides or spending countless hours trying to pry the weeds out by hand.

More tips on weed removal can also be found here: How to Remove Weeds from a Brick Pathway Without Herbicides.

Weeds growing between bricks on an otherwise nice patio or driveway are annoying! I’m not talking about intentional plantings of moss or thyme, but pernicious, invasive weeds including dandelions that start taking over when your back is turned.

As an organic gardener, I like to deal with these issues as harmlessly as possible, always considering what any product or action may do to the environment and animals.

No matter what you choose, the fact is, that unless a weed is killed at the roots, or the roots are entirely removed from the ground, it will very likely grow back.

While I remove weeds in garden beds by hand (this has excellent weeding tips), it is not always possible with weeds growing between bricks or stones. Sometimes the crevices are so tight that the weeding tool cannot fit between the bricks to pry the roots out.

Ruling out herbicides and vinegar (because it too is problematic), I started using a steam machine instead. I have a McCulloch steam cleaning machine.

Using a steam machine is similar to applying boiling hot water on weeds but much easier to do if you have a lot of weeds to tackle, and, as I found, more effective.

The video and step by step progress report (below) provides all the details.

How To Steam Away Weeds

The machine you see here is a McCulloch Steam Cleaner, marketed for indoor cleaning projects as well as outdoor items like patio furniture.

Knowing that boiling water may kill weeds if—and only if—the roots are penetrated, I thought it would be interesting to see what a steam cleaner does.

I did the test you see in the video on a dry driveway, not in a garden bed.

A machine made for this purpose can be used throughout the garden.

Because this is a non-conventional use for this machine, any alternative uses like this are completely at your own risk and most certainly break any warranties.

If you decide to steam weeds, get yourself a proper machine made for this purpose.

Watch How it Works

I recorded the process over a few weeks to monitor how the weeds responded to steam.

Keep in mind that while we’re not using harmful herbicides, the steam will kill any microbes (the life-givers of soil!) it comes into contact with, so only apply it right where you need it.

About The Steam Cleaning Machine

Here’s how the driveway looked at the beginning.

Why is my driveway such a hideous, weedy mess, you ask? It’s all in the name of science. I intentionally let the weeds grow extra long so I could really put the steam machine to the test. Or, that’s my story and I’m sticking with it.

Using the Steam Cleaner on Weeds

I set the machine to constant steam and aimed the brush at each weed for 4 to 8 seconds. Sometimes I realized I was being too quick, so I would go back and give them a double dose.

If it’s a choice between pulling out weeds on my hands and knees, or standing and aiming steam at them, my vote is for steam every time.

I could see changes in the weeds almost immediately. They started out green and happy, and, three hours later, they were looking a little beat up.

There was still lots of green, but they were slumping over and looking parched. I became cautiously optimistic, although, if you have ever applied boiling water to weeds, you know the foliage is quick to die back but the roots may be alive and well.

It rained heavily after Day One and I thought that might perk the weeds up. But no! They continued to look dry and unhappy—a good sign that the steam might have worked, although I was still skeptical whether the roots would truly be killed off.

Things appeared drier yet on Day Three. I also noticed where I had missed applying the steam to some weeds.

By Day Four, I could tell the party was over for the weeds. I pulled a few of them, and their dried-out roots came right out of the cracks. Yes!

Instead of waiting, I decided to steam any weeds I had missed the first time and reapply it to any that still had some remaining green growth. You must go in and finish the job while the enemy is weak, said somebody.

We’re calling this one early! I thought it might take weeks, but, by Day Five, I could see that the weeds were truly dead or dying.

The steam cleaner was a weed-killing success. Once again, I’ve thought up a great invention decades after it was actually invented.

Before we celebrate, here’s a reality check. Even if you get rid of the existing weeds (roots and all), new seeds are always standing by, ready to germinate in the cracks.

While having a porous driveway or walkway has great benefits for water drainage, you may want to fill the cracks in problem areas with polymeric jointing sand.

After steaming my driveway, I used a power washer to remove some of the soil between the bricks.

Then I applied polymeric jointing sand to the cracks, which, when damp, expands to fill gaps and then solidifies.

Ultimately, I was really happy with how the steamer worked. It was far easier than using countless pots of boiling water and much easier to target.

There is no stopping the problem entirely, but, between the steamer and jointing sand, it can be greatly reduced. 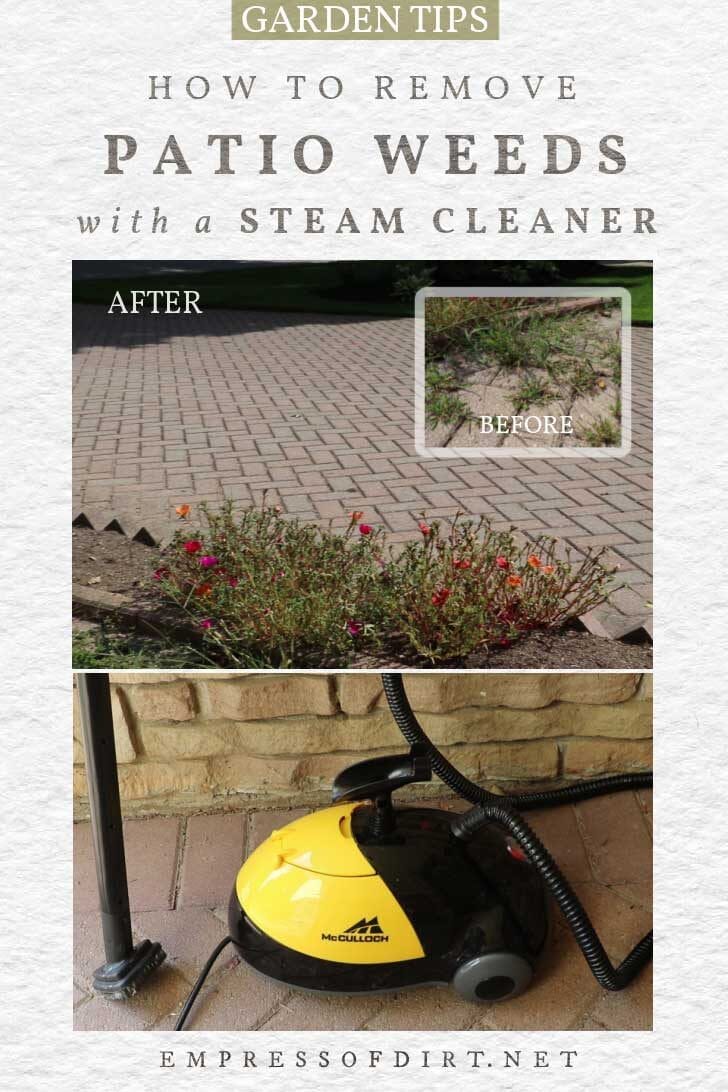