Do birds really get drunk on fermented berries? What about squirrels, or bats, or elephants? Find out what’s really going on when wild animals consume alcohol and overdo the natural bubbly.

For more, also see these articles on life with wild animals in the garden.

Is that Squirrel Really Intoxicated?

Have you ever seen a bird or squirrel or some other wild animal that seems otherwise healthy but appears to be drunk?

That was the case when I recorded this video years ago.

I watched as this squirrel (one of our regulars we knew well) went around the garden eating masses of old cherries that had fallen to the ground. He ate so many I thought he’d get a belly ache, but, alas, within an hour or so, he was downright drunk.

This little guy was trying to walk along the patio roof, but could not keep his balance. He kept resting on his belly and yelling at the wind. It went on for about an hour or so.

When I initially shared the video, a number of people wrote to say that animals do not get drunk and he must be suffering from some sort of illness or disease.

I had heard a lot of stories of drunken animals over the years, so I decided to find out if they do indeed become impaired from alcohol consumption.

When ripe or over-ripe fruits rot or ferment, their natural sugars convert to alcohol. This happens in all sorts of berries and fruits found on trees and shrubs.

The amount of alcohol in a small berry is not much, but, for a bird with a tiny liver, a handful of berries can add up to a lot. And a handful for a hungry squirrel, is more than enough.

And that is indeed what happens.

Animals can and do get drunk.

There’s plenty of research where the actual blood alcohol levels are measured and behavior observed to see the effects of alcohol on various species.

The smaller the animal (and specifically, the liver), the more likely they are to get impaired when eating fermented fruit.

Larger animals (with larger livers) may become only slightly tipsy or not show signs of impairment at all.

In the case of the squirrel in my garden, he really over-indulged. The first red flag was how he stayed to eat the cherries instead of carrying them away for his stash. Clearly, he was on a bender and wanted to stay in the open-air pub and gobble them up.

Not All Animals Get Drunk on Alcohol

As I was reading about this topic, I also found a lot of examples where animals should but do not seem to get impaired when consuming large (for their body and liver sizes) amounts of alcohol.

Many types of bats, for example, live on fermented fruit and get crazy blood-alcohol levels, but studies show this does not impair their ability to fly. They navigate the airways just as well as their sober friends. There are tree shrews in Malaysia that indulge in absurd levels of alcohol in fruit and carry on as if they were clean and sober. It’s mysterious.

What to Do if you Find a Drunk Bird

Drunken birds are known for harming themselves by flying into windows or walls.

If you find a bird that you are quite certain is drunk (not injured or ill), you can place it in a cardboard box with air holes and keep it safe for a few hours until it is sober again.

Keep the box in safe, quiet spot out of harm’s way. Keep it safe from predators but interfere as little as possible.

Once the alcohol is out of its system, the bird should be good to go. Hungover, perhaps, but ready to fly.

So, if animals can and do get drunk, is it intentional?

Some animals intentionally seek out alcohol (and other drugs found in plants).

Some consume them by circumstance: they need the food source and the mind-altering substance is secondary.

Others avoid mind-altering substances even when other food sources are much more difficult to obtain.

Which at this point is sounding just like humans to me.

This moose in Sweden was apparently desperate for food and had a few too many fermented apples from a tree. I don’t like to see animals in distress like this (of course) but it does illustrate the point that animals get into the same troubles with booze as humans can.

Ever hear the rumor that elephants hang out and get drunk by eating fermented marula fruit? I remember first hearing this as a kid.

Turns out it’s not true. While elephants do behave differently after eating from marula trees, it is thought that there is some other mind-altering substance at work: there is simply no way for an animal that large to consume enough fermented fruit to become impaired.

But, if you have vacationed on a tropical island and swear you saw a monkey sneaking sips of a leftover margarita at an outdoor eating area, you could be right. There are various species of monkeys that intentionally consume alcohol including beverages made for humans (however they can get it) and get tipsy. Apparently, this behavior peaks in their teenage years. Go figure.

You’ve probably heard the notion that koalas get high on their diet of eucalyptus leaves. This is false. They are not impaired, just conserving energy. Their food takes a long time to digest and to conserve energy, they move slowly and sleep many hours per day like cats. And, since we’re talking about them, they should not be called ‘koala bears’ because they are marsupials, not part of the bear family. 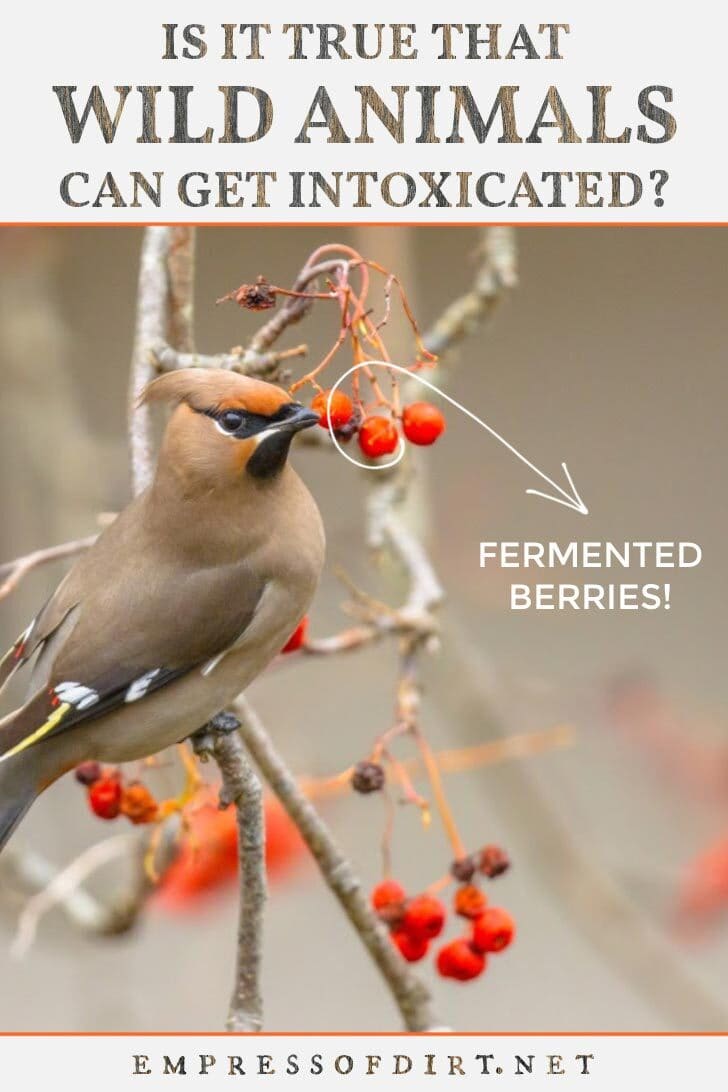