One day we came home to find a homing pigeon waiting at our front door. This is the story of his voluntary stay with us during that summer.

For more, also see how a hummingbird seemed to fall in love with our cat.

As I had no idea how this story would turn out, I kept these notes from day to day.

I came home one day last week to find a pigeon at my front door (!):

It was obviously quite tame as it was happy to stand on the porch rails while I let myself in:

Unlike big cities, I rarely ever see a pigeon where we live. I’ve also never seen one that looked so clean and healthy.

The next day I found him resting in the backyard. I gave him birdseed and water while we sorted things out. Or, he puffed up for a nap, while I sorted it out.

The tags on his legs revealed that he’s a registered Canadian racing pigeon. After a few emails, I located the owner and gave him a call.

Turns out PeeBee (short for Pretty Bird, according to my daughter) was mid-race on his way across Canada.

The owner didn’t seem to want him back. I guess he just wants the ones that win the prizes. The rebels are left to figure life out for themselves.

PeeBee disappeared for a day and then returned. He just hangs around and approaches me when I go outside. He’s quite affectionate. I’m a bit torn since he’s not really a wild animal. He’s used to the domesticated lifestyle. I keep hoping he’s merely resting up for the remainder of his journey (as the websites seem to indicate can happen) but so far he’s the sweet guest who doesn’t seem to leave. He follows us around the garden, always standing nearby. He’s a very nice gardening companion! I find myself talking to him as I work.

So far he’s touched noses with a few squirrels and a mourning dove. All the garden regulars seem to give him their seal of approval. Stay tuned to find out if PeeBee decides to stay in the Empire or carry on his way. Only he has the answer to this. For now we’re enjoying having him around. I’ve never had such a willing subject for photos.

So far PeeBee continues to choose the Empire as his home base. He’s very tame and seems to seek out human contact.

Each morning I come out with water and seed and call out for him. He’s usually resting in an eaves trough (roof gutters) up high and when he hears me, he flies down to the fence top where I have poured the seed.

All of the regulars in the garden are friendly with him, with the exception of the squirrels who are too aggressive in their pursuit of the seed and scare him off. To ensure PeeBee gets his fair share, I now stand beside him while he eats. Did you know a pigeon takes about half an hour to eat breakfast? I do! If he sees a squirrel or a cat coming toward us, he stops eating and bobs his head to signal me. That’s my cue to scare off the unwanted guest so he can continue eating.

When the mourning doves first saw PeeBee, they came right over to him and touched beaks with him. So cute!

Our alpha male cardinal, who flies away at the slightest noise, has spent time beside PeeBee on the fence top. It’s pretty clear that PeeBee knows nothing about aggression or pecking orders. He’s just a sweetie and even the most skeptical of critters immediately falls under his love spell.

If his popularity continues to soar, I think we’ll nominate PeeBee as Mayor of the Empire. Or Ambassador. Or something equally distinguished.

The other day I was in the swimming pool, looking up on the housetop for PeeBee as I floated around. I called out to him a few times and suddenly he flew across the sky from one housetop quite a distance away to another. Within a minute he was back on our rooftop, doing his sideways head bob that says, Hello! I see you! How are you? It’s impossible not to love him.

I’ve been reading up on pigeon care and what is the best possible life for a domesticated pigeon. I’m choosing to believe the advice that says they really love to fly, as opposed to living in a cage. And they need special pigeon food with the right grit to aid their digestion (much like chickens, but different food), and they need water and love to bathe. I don’t want to tamper with the new life PeeBee has found for himself so I’m just providing the food, water, and conversation, and letting him be free. I’m also figuring out a bird bath for him.

He could disappear any day. The main predator for pigeons is hawks. We’ve had a surplus of hawks for the past few months after a huge peregrine falcon started showing up above the neighbor’s free-range chicken area, salivating over the poultry menu. After that, all sorts of hawks got the same memo and started coming around. The chicken’s are now kept in a protected area, but the flying hunters still check to confirm this many times a day. PeeBee doesn’t like to perch in trees and instead goes on the edge of the roof, right in the open for all hungry hawks to see….

I’m not thinking ahead about winter housing yet because it’s hard to believe we’ll be lucky enough to have PeeBee choose to stay on with us for that long. It’s a big world out there and he may have other things to explore. So for now, it’s one day at a time with PeeBee, Mayor of the Empire. Elected! I called it!

Our sweet prince continues to take his breakfast on the fence top at approximately 9:03 a.m. each day.

PeeBee bobs his head up and down when I call him. I really like seeing him each day. He has graced us with his presence for almost three weeks now.

We left off this tale with our dear Prince PeeBee spending many of his waking hours on Mr. Two Shrubs Now One Shrub’s (knickname for my nosey neighbor) bay window top, overlooking our back garden. Initially the squirrels would chase PeeBee from his food, but after a week or so they came to an understanding:

PeeBee gets the tray and the squirrels can hang from their heels and steal from the tube feeder. An amicable arrangement if ever there was one.

Occasionally other visitors drop by for afternoon tea. PeeBee has no qualms about sharing his food:

He is truly a man of the people. Or friend to the animals. Or tolerant domesticated pigeon who has no clue what competition or aggression is. Or something like that.

However, it has been three days since I last saw his bobbing little head, so I’m not sure if our dear PeeBee is now on vacation or has found the right wind and carried on his way to his next adventure.

Only time will tell.

My prince is gone.

I’ll never forget the first time we met. I arrived home to find him standing at my front door. I said hello and he jumped up on the railing to get a better look at me. Not certain of his name, my daughter dubbed him PeeBee, short for Pretty Bird.

PeeBee soon learned that there’s fine bird seed and peanuts to be had in the back garden and he started spending his days there. Each morning I’d come out at the same time and he would be there waiting for me. I’d pour the seed and then talk to him for a while. If I tried to leave too soon, he’d hop down to the ground and follow me. Sweet bird.

Before long, all of the other critters in the Empire had met our fine Prince and befriended him. PeeBee played no favorites (except perhaps me). He was willing to share with anyone who came along and didn’t seem to fear or cause fear in anyone.

The squirrels could be engaged in five-way wars and PeeBee would just stand there in the midst of their chaos, bobbing his head now and then to get a better look.

Some days I would be doing yoga in the house and I’d look out to find PeeBee doing yoga on the fence.

Eventually, I would be working in the back garden and PeeBee would fly around from roof top to roof top. I could call him and he’d come flying over to our house and then hop down onto the fence, confident that I had left him something delicious to eat. Smart bird.

After a few weeks together, I began to worry about PeeBee’s future. He was a tame pigeon living like a free bird. I did not want to confine him in a cage for the winter, but I knew his chances of survival would not be great without some assistance.

We had many conversations about this, he and I. I told him, if he was going to find a better winter home, he should do it soon. There were also a lot of hawks spending a little too much time on the roof tops, and I suspected they were trying to figure out how to spell PeeBee so they could put his name on the dinner menu.

Soon after we went on a day trip. I had a feeling that morning would be the last time I saw PeeBee. Sure enough, he wasn’t there when we arrived home. Or the next day. Or the day after that. And I haven’t seen my sweet prince since then.
My hopes are that he found another sweet spot to land. Somewhere safe and warm with good seed, fresh water, and more fine conversation. I miss our morning talks. He was a great listener.

Farewell, PeeBee. It was a honor having you here. 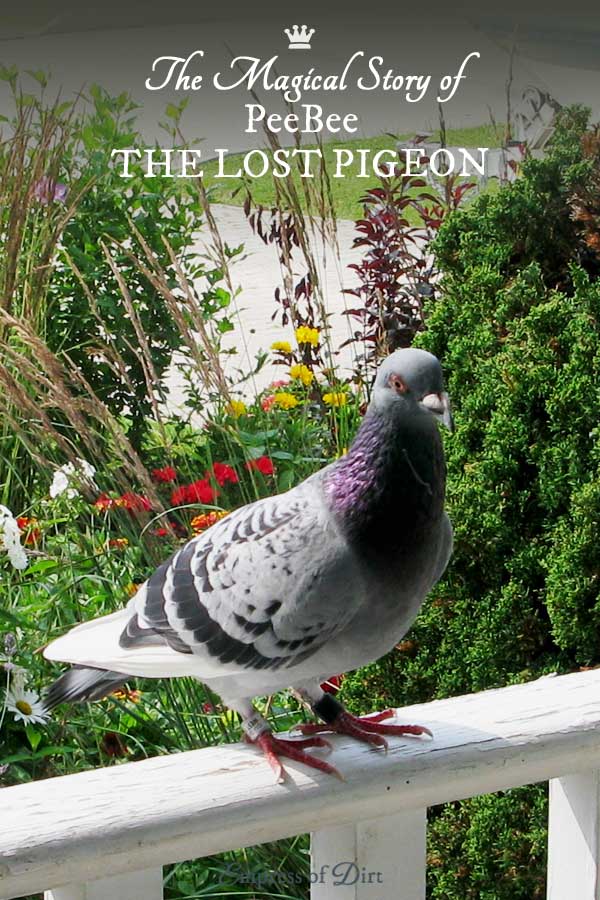