Oak trees (genus Quercus) are found around the world with hundreds of species vital to ecosystems and the food web. Let’s have a brief look at the natural history of these trees, their ecological benefits, and what it means to have a mast year of acorn production.

See How To Grow An Oak Tree From An Acorn for a step-by-step propagation tutorial.

The Natural History of Oaks

We’re not quite sure where they began, but in the 56 million years since they first appeared, oaks went from one species in one place to over 400 species that expanded to five continents.

Today, you find oaks growing around the globe in all sorts of soil types, elevations, temperatures, and rainfall levels.

With 400-plus species, there’s a good chance there’s an oak suited to most places on Earth.

Oaks are most plentiful across North America, Central America, Europe, and Asia.

New species are still being found in Central America, Southeast Asia, and—mostly—Mexico—where there are almost twice as many oak species as the United States and Canada combined.

In American forests, oaks are the dominant tree with more biomass than any other tree. Pines are a close second.

There are no oaks in Antarctica and any found in Australia and New Zealand were introduced, not native.

The Natural Migration of Oaks

We think oaks originally came into what is now the United States from what is now Canada. As temperatures on Earth got cooler 30 or 40 million years ago and some regions became too cool for tropical trees, there was an opportunity for oaks to move south and they took it.

Gradually, oaks died off in the far north and other trees better suited to the colder conditions took hold.

Oaks continued to push south into Mexico and Central America and, finally, into the very northern part of South America in Columbia, just above the equator, still within the Northern Hemisphere.

Oaks also moved through much of Eurasia from the United Kingdom and the southern parts of Sweden and Norway, again down to the equator in Borneo and Sumatra. They also got into the very northern part of Africa in Morocco and Algeria.

A quick way to tell them apart is the leaves. White oak leaves tend to have rounder lobes while red oak leaves have pointier or “bristle” tips. Each group also tends to be resistant to different pests and diseases.

If you want to grow an oak tree from an acorn, it’s helpful to know that white oak acorns germinate right away in fall while red oaks require a period of cold stratification first.

Oaks as Food and Habitat

While acorns are an abundant food source, the whole oak tree—acorns, leaves, branches, trunk, and roots—is an important resource both as it lives and dies.

Throughout all these stages, oaks support a diverse range of living things including birds, insects, mammals, fungi, and other microorganisms. And many of the insects and arthropods including caterpillars that feed off oaks are then themselves food for other wildlife.

Squirrels aren’t alone in their love of acorns. Humans have likely been eating acorns for tens of thousands of years.

Today, there are dozens of species of wildlife in North America that rely on acorns as a food source.

Over 100 vertebrate species in the United States eat acorns including:

Blue jays have formed a special relationship with oaks. The jay gets food and the oak tree gets help with acorn seed propagation.

Like squirrels, jays are “scatter hoarders.” Instead of a single food cache, they bury acorns throughout their territory. They can do this because jays have a flexible esophagus which allows them to transport one or two acorns at a time without damaging the seed.

In just one season, a single jay can stash thousands of acorns—far more acorns than it could ever consume.

Buried just below the soil surface, the acorns are placed at a depth that happens to be right for germination.

If conditions are favorable all the way along, those acorns will sprout and grow into new oak trees—sometimes as much as a mile from the mother tree.

While oaks contribute so much to the ecosystem, they do not do much for pollinators. They are monoecious flowering trees (with both male and female flowers on each tree) and pollinated by wind so there is not much to offer bees and other pollinators.

Historically, as an abundant tree in American forests, wood from oak was a common choice for building homes, furniture, ships, and barrels. White oak in particular does a great job of holding water. For centuries, the most popular ink in much of the world was made from oak galls  or “oak apples” which form when gall wasps lay their eggs in oak leaves.

How Oaks Help The Environment

Along with their role as a keystone species supporting the food web, oaks contribute to the environment by cleaning the air, absorbing pollutants, and sequestering carbon dioxide.

Oak leaves return a lot of nutrients to the soil and the microbial communities they support help cycle these nutrients into usable forms.

Other trees also provide many of these benefits to ecosystems but oaks are particularly good at it and, when the oak is long-living, the benefits continue for centuries.

There are diseases that target oak trees that have become very concerning in parts of the world.

Oak wilt, a fungal disease, has been spreading from the Midwest and eastern United States since the 1940s. It’s been found in at least 24 states now and is just now starting to appear in Canada.

In California, the big concern has been sudden oak death, a disease caused by an oomycete (water mold) that has killed millions of oak trees in California since it was discovered in 1995. It was found in the United Kingdom a few years  later, where it mostly infects larch trees, not oaks.

We previously mentioned oak galls used to create ink for pens. Gall wasps infect oak leaves causing galls or “oak apples” to form. While the galls proved useful for creating ink, the wasp itself is considered an oak tree pest.

Acorn weevils (Curculio glandium and C. venosus) also do some (usually unsubstantial) damage while going about their normal life cycles.

There are plenty of other potential “pests” but it’s oak wilt and sudden oak death that are most concerning today, resulting in the destruction of vast populations of oak trees. This is something to investigate first if you are thinking of planting an oak species.

We’ve had just one mast year (in ten years) so far for our walnut tree and it was astonishing how many walnuts were produced—numbers far greater than we had ever seen.

If you’ve ever witnessed a mast year for oaks, it really is a sight to see. The acorns can be inches deep, upwards of six inches if not more, with numbers far greater than local wildlife could ever hoard or consume.

The word “masting” comes from an Old English word of Germanic origin, “mast,” which means “the fruit of forest trees.” While we have a name for it but we’re not quite sure why or how it happens.

Research shows during mast years a tree—with its finite resources— directs its energy into nut or fruit production and other growth is slowed or halted.

How often trees mast will depend on the species and circumstances.

One of the most curious aspects is how some trees have mast years in clusters. It’s not just one tree but swaths of the same species throughout a region that may mast at the same time, as if they’ve all received a memo saying this is the year.

Through evolution, plants adapt to improve their chances of survival. For an oak tree that means living long enough to produce viable acorns that in turn create more oak trees.

So how could masting help with this?

There are a number of interesting hypotheses related to abundance and scarcity.

We can certainly see that mast years—with their unpredictable cycles—have ripple effects for the entire, associated food web.

One year it’s an all-you-can-eat acorn buffet. The next year—or few years—production may be modest or scarce, and all those plumped-up birds and mammals from the previous year are left scrounging.

A mast year can also mean far more acorns germinate some years than others, perhaps allowing greater numbers of seedlings to survive than usual.

It’s also thought that mast years could also have something to with synchronizing pollination between certain trees to help protect their genetic lineages.

It’s a vast and interesting topic you might want to explore further.

Why are so many acorns falling this year?

A year when an oak tree produces far more acorns than usual is called a “mast year.” It is common for whole swaths of trees to undergo mast years at the same time. It is an evolutionary adaptation that helps ensure the survival of the trees.

How often do mast years occur?

Mast years do not follow a fixed schedule. How often they occur depend on a number of conditions include weather. When they do occur, they demand an incredible amount of resources for the trees to be so highly productive and it takes several years to recover.

The whole process is not entirely understood but there are some interesting theories about how unexpected abundances can change animal behaviors—the ones who rely on acorns as a food source—and support long-term survival of the trees.

Why are there no acorns this year?

It takes a lot of resources and the right conditions for oaks to produce acorns. Years immediately following a mast year—where acorn production is unusually vast—tend to yield few if any acorns. This downtime allows the tree to recover and gradually build up resources for another future mast year.

Do a lot of acorns mean a hard winter is coming? Do acorns predict weather?

No. How trees behave tells you about conditions they have experienced. They do not predict what is to come.

Watch how oak canopies are brimming with life.

How oaks and other trees were affected by the Great Storm of 1987 in the UK.

This answers common questions about growing oaks from acorns.

Bringing Nature Home: How You Can Sustain Wildlife with Native Plants | Doug Tallamy

Garden Allies: The Insects, Birds, & Other Animals that Keep Your Garden Beautiful and Thriving | Frederique Lavoipierre

The Humane Gardener: Nurturing a Backyard Habitat for Wildlife (How to Create a Sustainable and Ethical Garden that Promotes Native Wildlife, Plants, and Biodiversity) | Nancy Lawson 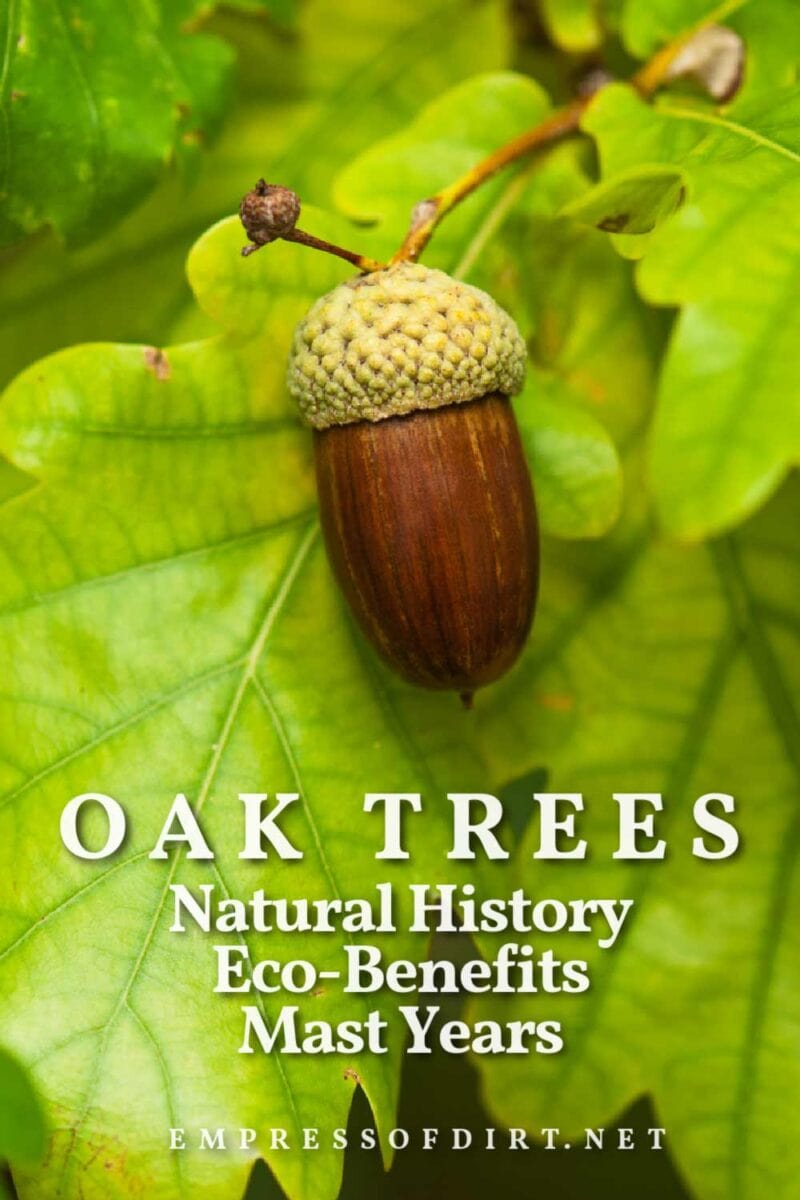