This beginner’s guide to botanical names shares the basics for gardeners wanting to get comfortable using the scientific names for plants. Once you understand the conventions for how the names are formed and written, you will know a lot more about the plants.

We also have a gardener’s dictionary to help understand garden lingo and terms.

A Quick History of Our Current Plant Naming System

To understand how plants are named and how we arrived at our current system, let’s first look at a brief history of plant names.

While plant names are fairly brief, once you know the rules for writing plant names, you can know a lot more about a plant just by the way the name is written.

In the 1700s, Swedish botanist Carl Linnaeus developed the binomial (two names) system for naming plants. Animal names are formed this way too.

Each botanical or scientific name has two parts: the genus and the specific epithet. The first word is the genus and then, to get a species name, a second word is added — the epithet — an adjective in Latin form. This second word may be a new creation and not actually a word from Latin. Sometimes the epithet is a Latinized version of a place or a person’s name.

When Linnaeus introduced this system, Latin was the international language of science so that’s what he used for scientific plant names. And it’s what we still use today.

The adoption of the binomial system was a major milestone, bringing some order to the chaos, but it took many more years before a shared, consistent system was adopted across the globe.

And from there, it wasn’t until the advent of genetic testing that we could further verify our classifications through DNA, which continues today.

The International Code of Nomenclature for Plants

Within this, plant cultivars altered or selected by humans are governed by the International Code of Nomenclature for Cultivated Plants (ICNCP).

Animals, bacteria, and viruses have their own separate Codes.

The goal is to have one correct name for each plant and avoid the mayhem caused by inconsistent or vernacular names.

While botanical names are standard in the science world, anarchy continues in the gardening world where we use a quirky mixture of botanical and common names (with countless regional variances).

To further spice it up, some plant breeders forgo established names in favor of more alluring, marketable names. Perhaps a rose by any other name does sell better!

The ICN rules are revisited every six years and the next meeting takes place in 2023.

Plants, however, can be reclassified at any time based on the best evidence we have. And when they are, their scientific names can change. We are truly in the early days of genetic analysis and, as the technology improves, we will be able to refine and add classifications more proficiently.

If you follow botanical science news, particularly in a year when the IBC meets, you know there are always new developments, disagreements, and findings.

Plant names are written in a particular format. Unfortunately, they are not always written in the proper format on plant tags, but these are the rules.

The genus is capitalized, the specific epithet is not, and both words are italicized or underlined.

When the entire scientific name is used, the genus name may appear in full or abbreviated with the first letter in upper case.

The world of plants (and life on Earth) is filled with different varieties, both occurring naturally from cross-pollination, mutation, or assisted by humans including hybridization.

Along with the genus and species epithet, you may also have subspecies, variety, cultivar, and form identifiers.

Once new traits become stable and continuously reappear in offspring, the new plant group may be assigned a variety name along with the genus and specific epithet to further define it.

This next format notes that the variety is unknown:

You don’t often see it these days, but the abbreviation cv. can be used to signify that the plant is a cultivar.

An “x” in the scientific name indicates that the plant is a hybrid.

The previous example, Echinacea purpurea cv. ‘Magnus’ or E. purpurea ‘Magnus’, is a hybrid too, of course.

If the world of plant names interests you, you might enjoy a course or book on botanical Latin.

Once you start understanding the meaning or etymology of the genus and species words, it becomes much easier to remember the proper scientific names and get a glimpse into their history and relationships.

PS: How do you know two plants are in the same species?
They can produce fertile off-spring. 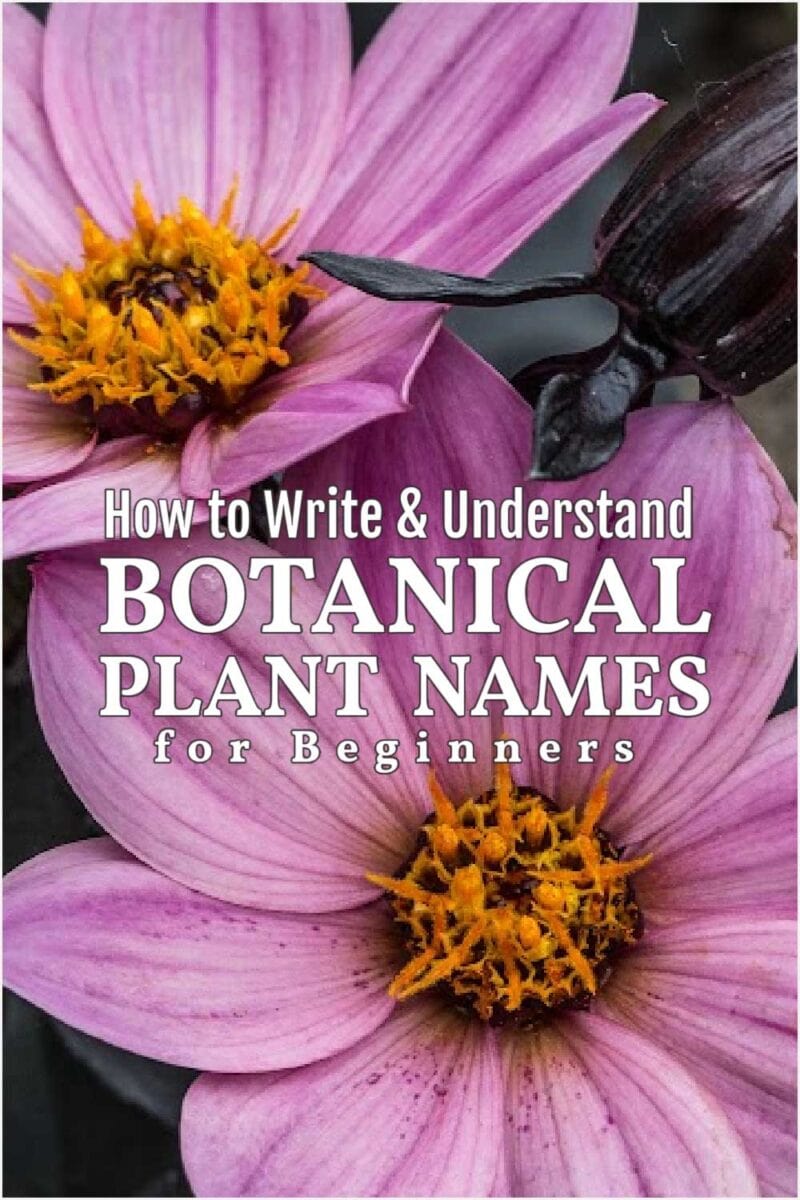