Need a rat-proof compost bin that keeps rodents including mice out? This tumbler compost bin keeps your food scraps away from pests and makes good compost for the garden.

For more about how to compost, also see Composting 101: Slow and Fast Methods. 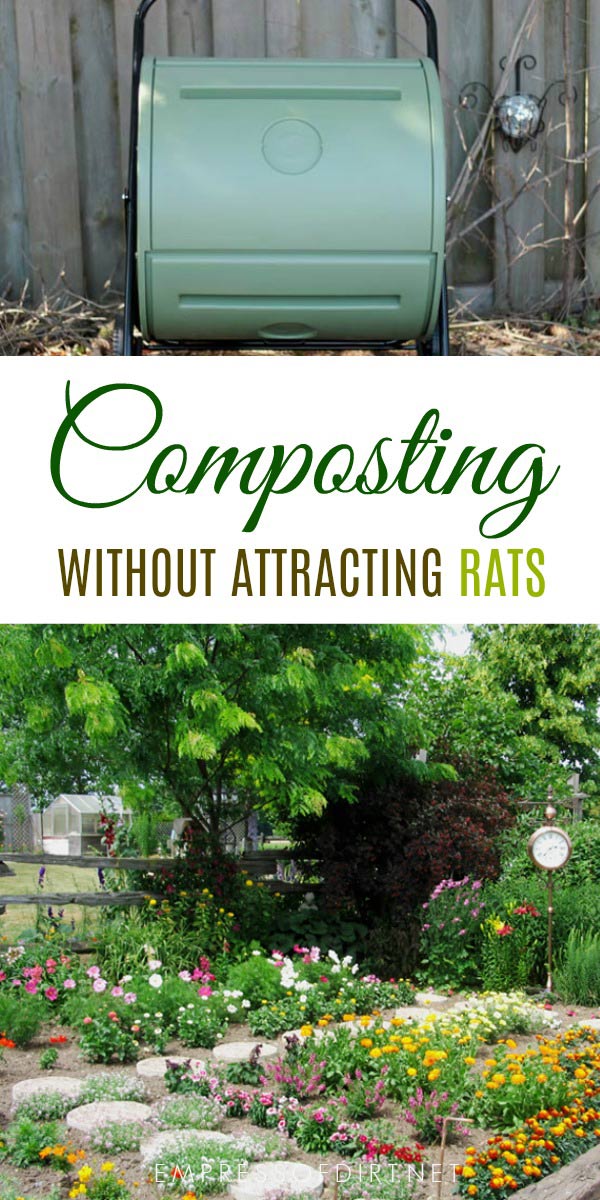 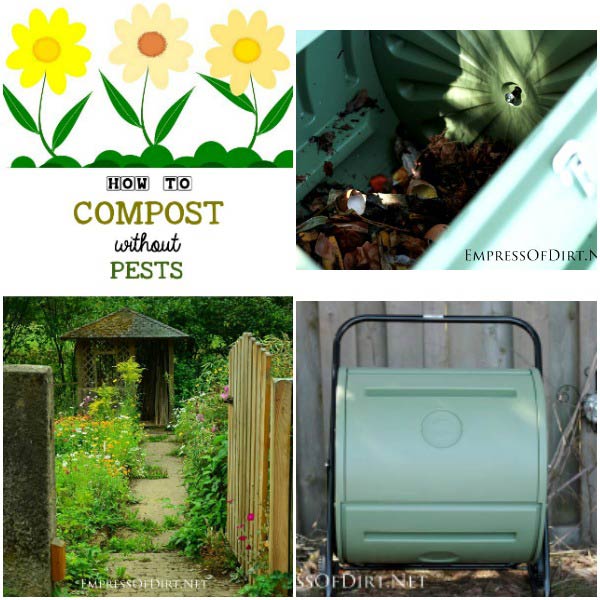 I live in a peaceful neighborhood where the only significant event I can recall in all the time we’ve lived here is the occasional coyote sighting. So, it was quite something to learn that a big conflict broke out between a couple of my neighbours over a compost bin.

One guy had a bin at the back of his yard, and, during one winter, a rat or two started dining there. The guy with the adjoining yard was not exactly thrilled to have the vermin around.
I’m not sure what went down but I know, upon meeting each of these guys, that they were quick to warn me about the other, and eager to share their versions of RatGate ’08.

While I’m sure some of the details were emotionally-slanted, two things remained consistent in their stories: there was a compost bin and there was at least one rat.

As the new gardener in town, I took this as a subtle warning: if you’re going to keep a compost bin, you better keep it rat-free.
Which, of course, sounds good to me. I’m interested in healthy compost and the thought of vermin tainting it does not sound safe or enticing.

Plus, I have no interest in ruffling the neighbourly feathers. 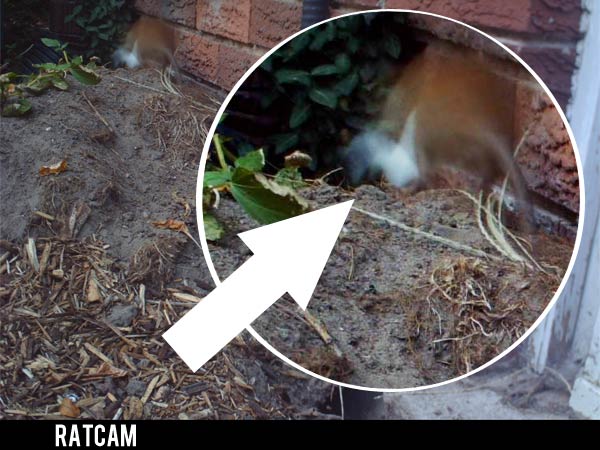 So, you can probably guess the next part.

Yes, in my first winter composting here, I attracted a rat.

I’d never had this happen at our old home so it took a while for me to even diagnose the problem.

Not so fast. We’re getting ahead of the story here.

I really like to witness things first hand before taking action, so I came up with a way to photograph this nocturnal beast.

At dusk one evening, I set up my birdcam (automated wildlife camera) with a trouble light on a little stand near one of the holes. I placed one, very delicious marshmallow in front of the camera, and retreated to the house.

When I checked the SD card not an hour later, I had my evidence. One mid-size rat high-tailing it back into his burrow with the marshmallow in his mouth.

Fortunately, I’d only put out a scant amount of fresh food scraps so it was easy to cut off his supply and send him on his merry way. No food, no fun, no more rat!

Related: How to Remove Skunk Odor

This brush with trouble prompted me to develop my simple winter compost bin. I’m lucky enough to have a screened patio where the vermin and other critters can’t access it, but, if yours is an open space, another good solution is a compost tumbler.

Related: How to Make Worm Tower for In-Ground Composting

Mantis sent me this Back Porch ComposTumbler and I’ve been testing it for few weeks now. And ‘test’ is the right word because we’ve been having very strange spring weather with huge temperature swings from 25C down to freezing. This has actually been ideal to get a sense of whether this unit will work for year-round composting. 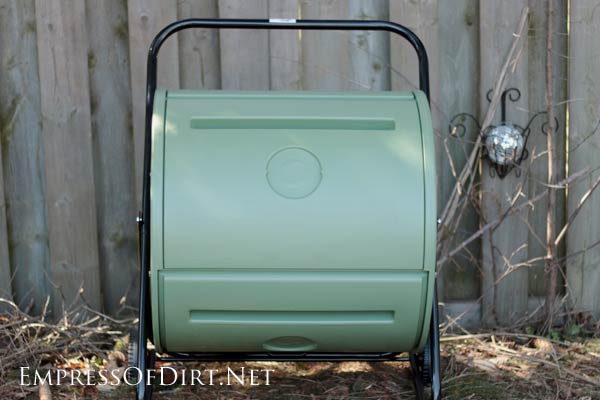 What I Look for in a Good Compost Bin

Here’s an overview of my experience so far

Assembly
The ComposTumbler requires assembly and the instructions were not detailed enough for trouble-free assembly. I know some people just glide through these things but I need good diagrams to assist me and there was some confusion in a couple of the steps. 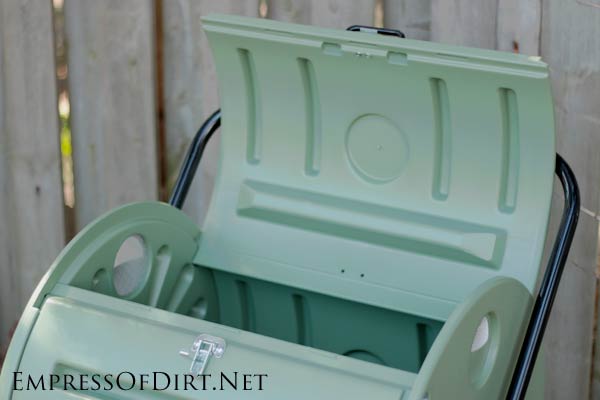 It’s definitely best to have two people assemble it together (one to hold things together while the other adds the bolts) and both must have a cheery disposition including the ability to laugh at silly mistakes. I’m probably over-emphasizing this part, but it did take my husband and I about 1.5 hours from start to finish with some laughter in between.

And I made one big oversight (didn’t hear an instruction from my husband, oops) that resulted in some re-assembling.

But, we did it and I’m sure you can too.

Once assembled, the unit is really quite cool.

The wheels make it very easy to move wherever you want it. The bin door and lock work as they should, and, once closed, it’s very easy to spin the bin. I make it a habit to give it a few good spins each time I’m out filling the bird feeders and it does have that game-show fun aspect to it.

There are built-in vents to allow some air-circulation and off-gassing (I assume) and one acts as a drain for surplus water to run out the bottom of the drum. This run-off can certainly be collected and used to water plants. 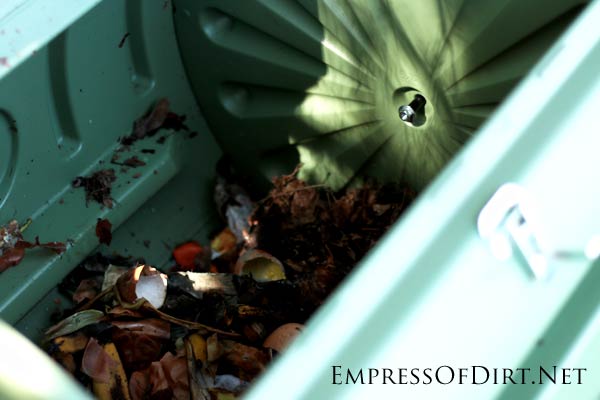 The First Lot of Compost

If you are new to composting, this will tell you everything you need to know to create your own garden compost from kitchen scraps.

Because I wanted to see how long one batch of compost would take with all of the ingredients added at once, I opted to start with a small batch (as much kitchen waste as I could gather over a few days). Those are what we call the ‘greens’. This post on composting shows lists greens and browns you can add.

To balance it with ‘browns’, I used some fallen leaves from the autumn garden and grass clippings. The ratio I have found works is 3 pounds of browns for every 1 pound of greens. 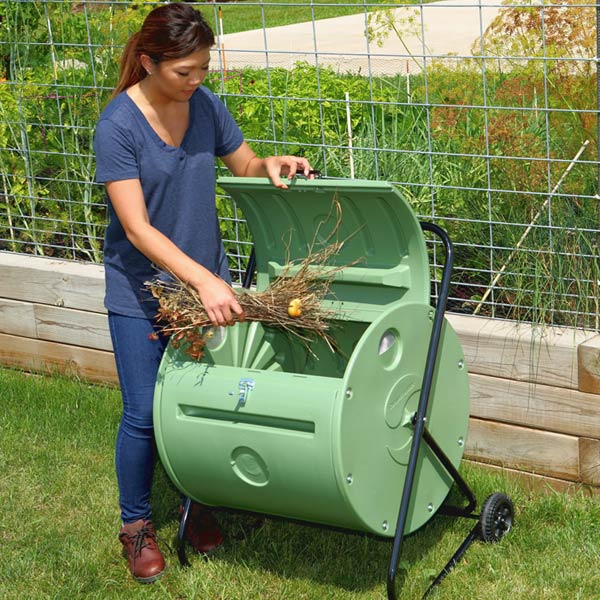 In normal, summer conditions (if I can say our weather is ever normal anymore), it should take about 4-6 weeks to decompose, if conditions are right (brown:green ratio, temperature, moisture and oxygen levels).

We’ve had several stops and starts with the temperature at or below freezing during this time so it would be very fair to expect it to take longer. Aerobic bacteria, the powerhouses of compost-making, work best when the compost pile has self-heated to 140-160°F. These warm temperatures also kill off weed seeds and pathogens, so it’s win-win. In freezing weather, everything is halted.

That said, we’re about a month in and there’s definite evidence of good decomposition. I can still see pieces of things (peels and leaves), but there’s definitely an earthier look and smell to everything. I was a bit skeptical about it as I’m used to composting right on the ground where the worms and their friends can get right to it, but this is definitely working as well.

I still have my portable winter bin stashed on the patio, but I’m definitely going to continue using this new one too. It’s easy to use and I do like the selling point that any suspicious neighbours (who know I’m a gardening fanatic) know I am not attracting vermin.

By this time, it’s probably safe to say that the bin has been inspected by a few skunks, possums, squirrels, chipmunks, and mice, all without incident.

I will be sure to provide an update when the warm weather finally settles in for the summer and I have my first batch of earthy, rich compost ready to go.