Is compost tea good for plants? Should I make it for my garden? Let’s look at what is known about compost tea and what—if any—value it has for improving soil and feeding plants.

This topic is part of an ongoing series where we look at common garden advice to learn whether there is science to back it up. See Popular Garden Myths We’ve All Fallen For to learn more.

When you first hear about compost tea, the idea seems logical.

Take some compost—the same compost we use to enrich our garden soil—leave it in a bucket of water, follow one DIY method or another, and eventually you’ll have a natural, liquid feed ready for your plants.

And by having the nutrients in liquid form, you’d assume it reaches plant roots faster, delivering the nutritional benefits sooner.

Some even claim it’s more nutritionally dense than regular compost.

But is this true and does it really work?

Let’s see what is known about compost tea.

The Problem With Studying Compost Tea

The biggest challenge with compost tea and trying to research its effectiveness is that compost tea is not one uniform thing.

On top of that, there are so many different methods for making compost tea. It may be as simple as placing some shovelfuls of compost in netting and letting it sit and ferment in a bucket of water for a few weeks. Or, it may involve aeration with pumps and hoses to “oxygenate” the brew. Or some other combination of steps.

And with so many variables, there is no standard compost tea to test.

If the idea is to turn compost into liquid feed for plants, does it matter that the composition varies each time? Aren’t the plants still getting extra goodness?

And doesn’t this feed plants more efficiently than regular compost?

Not that we know of.

Most of the benefits that are claimed for compost tea can be achieved by just using compost.

There is no question that there are nutrients in compost including water-soluble nutrients that can easily make their way into a compost tea.

But the punchline is, it’s not a very high concentration of nutrients, no matter how it’s made.

Compost is still the soil amendment of choice for those of us who want to improve our soil on an ongoing basis without relying on synthetic fertilizers, but the fact is, no matter how it’s made, those nutrient levels are low.

Turning compost into compost tea doesn’t change the values. It just becomes a low concentration of nutrients in liquid form.

Turning compost into compost tea doesn’t change the values. It just becomes a low concentration of nutrients in liquid form.

But won’t the tea deliver what nutrients there are to the soil faster?

Not really. From what we know, it’s not much different than adding compost to your soil and watering it.

I have several garden friends who swear by compost tea—and who doesn’t rely on our own experience or anecdotal evidence to guide some of our garden decisions? But, after realizing how scant the nutrients would be—which is something science has confirmed—it makes me wonder if it’s their attentive hand-watering that is really helping rather than any substantial feeding going on.

Just think about how much compost would go into a batch of compost tea. How much nutritional value could we really expect from a shovelful of compost?

There could also be some microbial activity, either beneficial or pathogenic, but it will differ with each batch and you’d have no way of measuring it at home.

If Compost is Available, Use It

Dr. Elaine Ingham, one of the best-known proponents of compost tea over the past twenty years, says this in her manual on aerated compost tea:

How do we get “the full diversity of bacteria, fungi, protozoa, nematodes” and so on in our soil?
It’s called “compost”, she writes. “Or compost tea, if the source of compost is distant, and transportation costs are too high.”

In other words, just resort to using compost tea if for some reason you can not access regular compost for your garden but do have compost tea available.

There is little value in compost tea if you already have healthy soil and regularly apply compost.

Ingham has said in interviews that she sees compost tea as being great for helping turn poor soil into something healthy—maybe for the first year or two if you have poor soil, but even she has said that there may be little value in it if you already have healthy soil and regularly apply compost.[8, 9]

We know the nutrition levels in both compost and compost tea are low but what about the microorganisms? Maybe there is something useful there?

While some microorganisms are pathogenic (harmful), plenty of others help plants in many different ways including disease prevention.

Some studies are looking at multiplying the number of microorganisms in compost tea using sugars or other foods as accelerants.

There is also experimentation with different recipes and methods to see which brings the highest concentration of the microorganisms you want and fewer of the ones you don’t.

There won’t ever be a universal tea, though, because what is desirable varies by plant and situation.

But perhaps there will be some microorganism-specific compost teas in our future.

One potential advantage compost tea has is that it can be used as a foliar spray and applied directly onto leaves and other shoots of plants which you cannot do with compost.

There have actually been many studies where compost teas have been shown to be effective in fighting particular diseases in some plants and even in improving growth.

But there have also been many tests where there were no improvements at all and some where the compost tea even made things worse.

This isn’t surprising, given the variability of compost tea.

We should also note that none of the studies have been done in gardens. Many are done in labs or other environments in limited capacities, using agricultural inputs like animal manures, making it quite a leap to apply the findings to our own gardens.

As it is today, we can’t see any reason to use compost tea as an ongoing, general treatment for plants.

There’s certainly some aspects worth further study, but nothing to advocate for compost tea use until more research is done. We may eventually find specific applications requiring specific brews, not the random mixtures we’ve prepared at home. If you have compost, just use compost, and save yourself some work.

If, however, by using compost tea it gets you to more attentively hand-water your outdoor plants—and they need it—by all means, go for it.

Unless you’ve concocted some funky brew, it’s all the same to the soil. 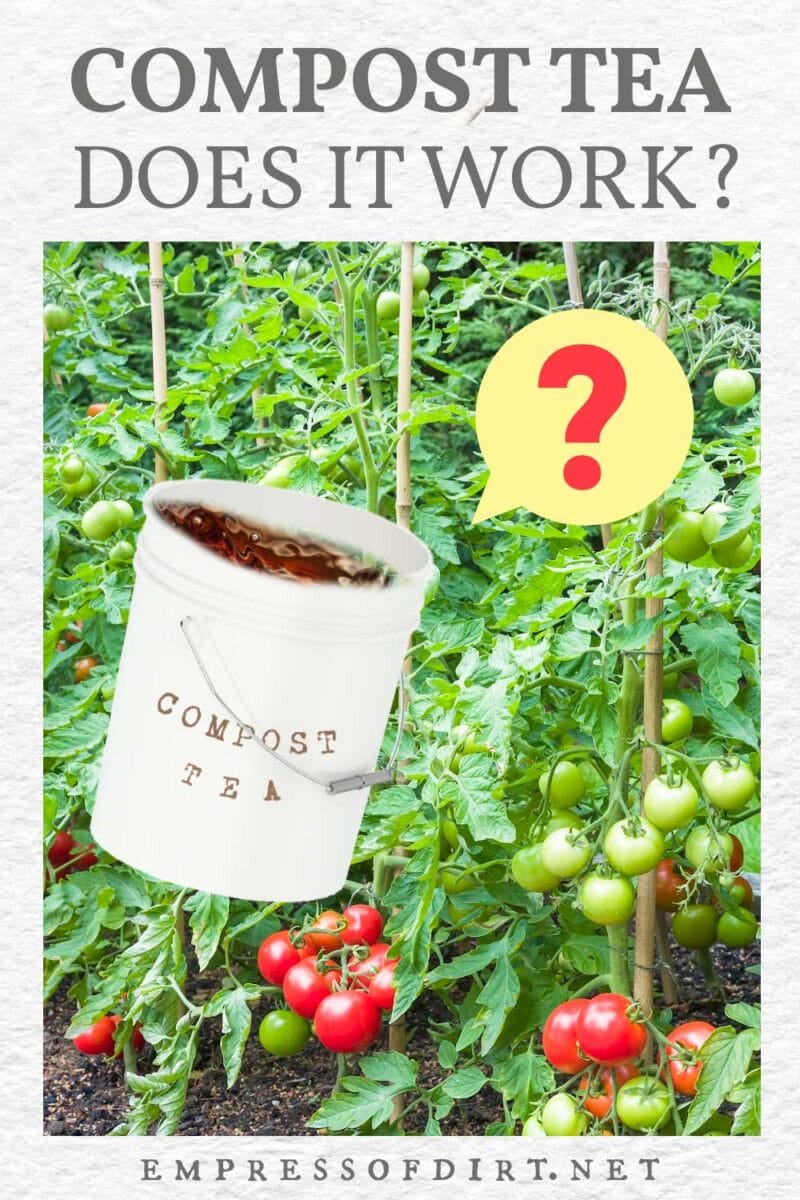