Can you eat Halloween pumpkins? It seems so wasteful to get rid of this giant vegetable just because October 31st is done. Although the answer is yes, you may not want to. We explain why.

I also have some no-carve options for creating super cute pumpkin people here.

Making Use of Pumpkins After Halloween

While they can be eaten, the mass-produced Halloween pumpkins found at grocery stores are bred to be decorations and do not have good flavor or texture. To avoid waste, chop them up and put them in the compost after October 31st. Or donate them to a goat farmer. The seeds, however, can always be roasted and enjoyed.

Halloween is a huge business in much of the world. In the U.S. alone it’s estimated that $9 billion will be spent on Halloween this year, split almost evenly between costumes, decorations and candy. All on an event that really just lasts a few hours, one night a year.

Some of those decorations and costumes will be used again in future years, but many won’t. And the millions of pumpkins that are sold every year for Halloween and carved into creative lanterns will be disposed of one way or another in the first few days of November.

Let’s look at some options to avoid sending this mass of pumpkins to landfills and find out whether they could end up on your dinner plate instead.

Can I Eat my Halloween Pumpkin?

In short, yes, but you probably don’t want to.

How edible they are depends on what kind of pumpkin you bought, what you did with it (did you already carve it?), and your taste palate.

The mass-produced standard orange pumpkins sold for Halloween have been bred and grown as decorations, not as food and not for flavor. That doesn’t mean they aren’t edible, but it may mean you’re not going to enjoy it.

If you carved it and had it sitting outside for days, it won’t just taste unsavory but it may also be contaminated.

The suggestions you’ll hear for cooking decorative Halloween pumpkins usually involve going out and buying a lot of other ingredients—sugar and spices, vegetables, sometimes meat—in the hopes that something can be made from all of this will make the Halloween pumpkin more palatable. Kind of like drowning a dreaded veggie in ketchup or butter and salt to avoid tasting it. Or turning it into a dessert dripping in sugar and calling it a treat.

A tried-and-true pumpkin or squash intended for cooking is a much better bet for a delicious soup or pie.

That said, if you’re determined to eat your Halloween pumpkin, and it’s still fresh, you can figure out a way to do it. There’s lots of recipes online.

But if you’re looking to eat and enjoy pumpkin, there are much more flavorful alternatives than ones grown as decorations. You could even grow your own heirloom varieties for next year.

Whether you eat some of the pumpkin or not, the remains can go into a compost pile, and that’s a great use for them. The organic material from the pumpkin will definitely benefit your garden.

Smashing your pumpkin before putting it in the compost pile—or, less dramatically, cutting it up—will speed up the process a bit. And, although most pumpkins are neither green nor brown in appearance, for composting purposes they are ‘greens’, providing nitrogen to your compost bin.

Pumpkins can self-sow their seeds for free plants next year if conditions are right.

Years ago, I purchased a bunch of decorative pumpkins and gourds that are still re-growing today.

At the end of each fall, I toss them in a garden bed. By the time spring arrives, they have decomposed, and some always self-seed, growing new ones for the coming fall. It’s the most effort-free way to get free pumpkins year after year.

If you have critters, you know goats, sheep, horses, pigs, and chickens will also gobble up your pumpkins unless they’re picky eaters.

So, don’t say we didn’t warn you about the taste, but if you do end up eating your pumpkin, we hope it’s spooktacular.

The recipe for roasting squash and pumpkin seeds is here. 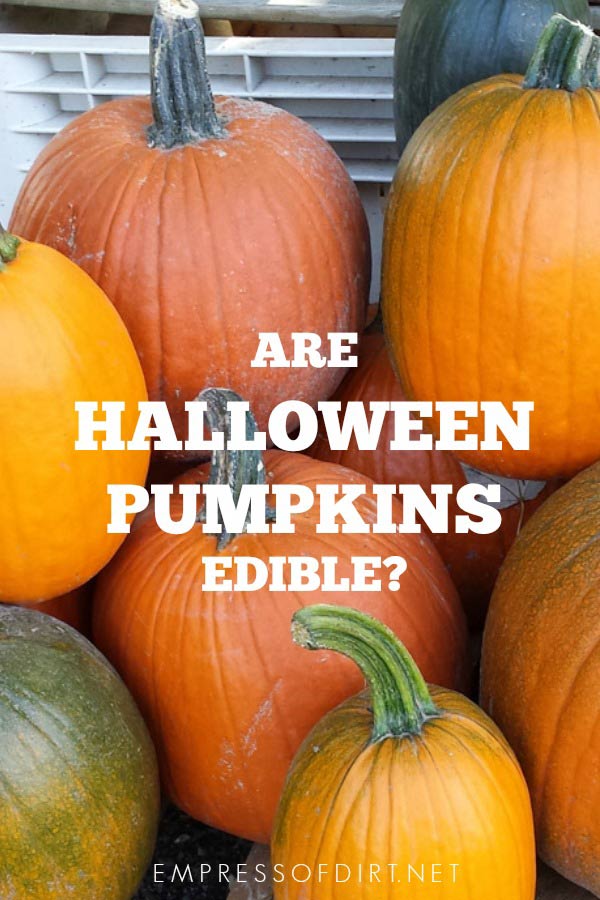