One day on a family outing, my husband lost his wedding. It flew off his finger and landed in a swamp! It seemed impossible, but we were determined to try and find it. Here’s our story from years ago.

If you enjoy personal stories, you may also like How I Learned to Run at Middle Age.

We were on family day trip and, at the end of the day when it was time for the long ride home, we stumbled across a Kiddie Land place with a castle, dungeon, and outdoor storybook-themed play land.

We’d bored the kids with several historical sites so, when they expressed interest in Kiddie Land, we decided to have a look.

My older daughter wanted to explore the dungeon (where you pay admission to be scared—who thinks up these things?) so I went with her while my husband, Gary, took our youngest daughter to run around the play area.

The storybook playhouses were spread out over an acre of land, so there was a lot to explore.

After about an hour, I’d had all the dungeon frights I could take (not my idea of fun), and we gathered everyone up to head home.

As we’re walking back to the car, Gary realized his wedding ring was missing. It must have fallen off in the playground.

I looked at him and then looked back at the vast play area.

We were getting tired, the kids were worn out, but I knew it would drive me crazy if we left without first trying to find the ring.

Gary, rationally so, said, There’s no way we’re going to find it. It could be anywhere.

And I, always the one who persists and persists again, said, You’re probably right but we have to try.

So we went to look around, hoping it was our lucky day.

Gary and our youngest had made it a point to visit every single attraction in the park. That’s dozens of playhouses, climbers, and pathways!

It was daunting but we had to start somewhere.

We began walking the paths, scanning the ground with our eyes as the girls checked inside each of the playhouses.

The playhouses were in a little forest of countless pathways. Beside the pathways there were patches of tall weeds, grasses, and deep beds of pine needles.

It was quite discouraging but my one hope was that the ring might glimmer in the light. It was a very sunny afternoon and there were rays of light beaming through the pines.

My other thought was that someone might have already found it (and kept it) or turned it in.

As we were looking around, I remembered a story I’d seen on the news where a couple lost a wedding ring while out in their boat and years later caught a fish for dinner and discovered the ring inside the belly.

I have no idea if it was a hoax, but, if true, it’s certainly a wonderful story. And with the thought that Yes, crazy-good things can happen now and then, I kept searching.

After searching a while, Gary was ready to give up. I was kind of intrigued to see how strongly I felt about the ring. Perhaps I’m more sentimental than I thought! It was definitely not the monetary value (there’s little or none) but thinking of how far it had come in this marriage, it would be sad to lose it now.

I wasn’t giving up. Looking around I realized we hadn’t checked the water area.

Did you guys go across the bridge? I asked, rather dreading the answer.

At the side of the property there was a large, marshy swamp, about 50 feet wide, with a rickety bridge running over it.

Yes, Gary answered. We started to go over the bridge but it was so shaky we stopped half way and turned back.

I walked onto the bridge and stopped at the halfway point.

I looked over the side and there, down in the water, something glistening caught my eye.

It was about 8 feet from the side of the bridge, about two feet below the surface of the water, resting on some swamp gunk and reeds. The swamp itself was much deeper. The only reason it was visible was because the water was so still (not murky) and the sun was shining down so brightly at just the right angle.

I knew wading was out of the question. It would stir up the gunk and we’d never see the ring again. Plus, we later learned that the swamp was indeed about 7-feet deep so I might have disappeared too.

I left Gary at the bridge to keep an eye on the ring while I went to speak to the property manager.

I told him the situation and asked if he happened to have a very long pole we could use. I was kidding (starting to feel a little desperate) but yes, he said he actually had one. I could also tell he thought I was nuts. He said people lose several rings each week there (!!!) and no one has ever found one. The vibe I was getting made me think he owned a metal detector and made valuable use of it in the off hours.

The pole was about 15 feet long, quite lightweight but really wobbly, with little latch hook on the end, used for hanging the castle flags each day.

I went back to the bridge with the pole. Gary was standing guard, keeping an eye on the ring.

We had one brief annoying interruption where some moronic woman was trying to let her two-year-old “assist” us. The toddler kept running onto the bridge, making everything wobble more as her mother cheered her on.

When they finally left, Gary and I stood side-by-side at the middle of the bridge as it wobbled and bobbed. We stood still until things steadied a bit. Together we held out the pole and eased it toward the ring. The pole would not keep steady and kept bobbing up and down as the tip approached that little shining bit of gold. One wrong move and we’d knock the ring off the reeds and lose it forever. It took four hands to manage it and even then it was not easy.

I don’t know how we could even see where to grab the ring when it was both magnified and distorted by the water, but somehow, on just the second try, the hook slipped into the ring. Got it! We slowly raised the pole out of the water and brought the ring to safety.

I seriously thought we were going to be there for hours or days or until my family dragged me away.

I think back on it now and cannot believe we got the ring. And on the second attempt.

While it wasn’t quite as magical as finding a ring in the belly of a fish, it was pretty amazing to us. And a very lucky day.

This is one of those times in life where you really can’t believe it all worked out.

The fact that I even spotted the ring in the swamp is ridiculous.

The fact that it hadn’t sunk down in the sludge and vanished? Amazing.

That the guy had a long pole with a hook on the end? Well, makes sense since he owns castles. lol.

That we could extend this thing eight feet beyond the edge of a very wobbly bridge and coordinate our movements together enought to actually thread the tip into the ring that’s lightly balancing on the top of reeds under water?

Still seems completely impossible to me, yet it happened.

Probably couldn’t do it again if I was paid a million dollars.

All these years later, he still has the ring, which has still never been sized properly to fit his finger. Ahem!

And, yes, we are still married. Just wanted to add that part in a for a laugh since that’s what everyone asks.

It was just one of those magical days. 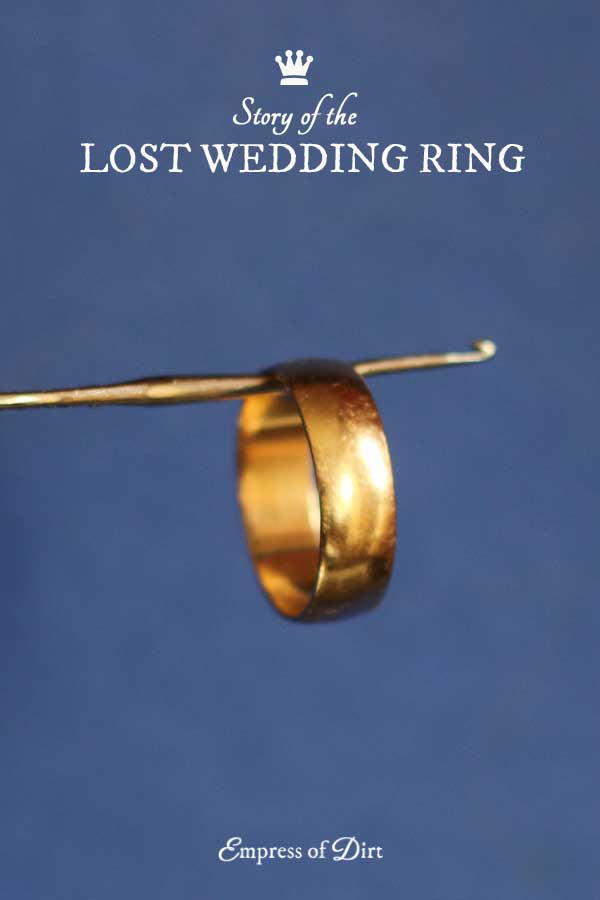