This chronicles my experience following the Cinch diet plan for one week. This is one of my most requested posts and very popular at this time of year when many people are thinking about diet, weight loss, and better health. Enjoy!

Since writing this, I have given up sugar and eat a low-carb diet.

I tried the Cinch diet for a week and wrote down all of my impressions. If a diet is going to work, it has to be realistic to stick with it. This one was a challenge but I did lose a good amount of weight…see what you think and consult your doctor before trying this or any other new diet or exercise program.

I also finally learned to run (at middle age). If I can do it, you can too!

Before You Get Started: How Does Your Belly Measure Up?

Are you fit and healthy? Here’s one way to measure:

If your waist is more than half your height (in inches), you may have an unhealthy amount of omental fat (belly fat). That’s the fat that builds up against your abdominal organs, behind the abdominal muscles. The waist area is the most dangerous place to have extra fat on your body. The extra weight pulls and stresses the organs, making them work much too hard, which in turn creates a bunch of other problems.

I had this belly fat problem (hello middle age!) and tried a week of the SASS Yourself Slim diet to kick-start some fat loss.

While you can’t target fat loss, with weight loss in general, eventually the omental fat has to surrender too.

Here’s what I’m having each day:

This is an abbreviated version of the plan.

You’d have to read the book or check Cinch discussion boards or blogs to get more details.

Herbal teas and water are encouraged between meals.

My Week On The Cinch Fast Forward Menu Plan

I did it. Five days of the Fast Forward plan. Phew!

Days Six onward begins the Core Program. There’s a wealth of food choices within a specific formula. You have four meals a day, each one with:

The serving sizes are specific to each food. It’s all in the book and I’m sure you can find it online somewhere.

My Results
I lost seven pounds in five days. When I resumed more ‘normal’ eating, I regained two, and then lost a few more pounds during the rest of the month by increasing my exercise and eating ‘normally’ (not dieting).

Here’s some of the questions I have received:

1. What happened next? Did you follow the rest of the Cinch plan?

No. There were several food combinations I really enjoyed and I continue to eat (eggs scrambled with garlic and spinach; raspberries with plain yogurt and some almonds), but I did not continue with the plan.

On a side note, I really wrestle with meal times in our household because we have three people with very different food preferences (total carnivore-my husband, mostly vegetarian-the kid, mostly vegan-me). I try really hard to find middle ground all of us can share. To me, vegetables are the answer but good luck convincing my people.

No: vegan means there are no animal products whatsoever. No dairy, cheese, milk, and obviously no meat. The Fast Forward plan is vegetarian because it contains dairy products but no meat.

3. Did you lose more weight?

Yes-ish, but not because of the diet. Two pounds bounced back (probably from the initial water loss) and then I increased my exercise and lost a few more pounds that month while eating ‘normally’.

I’m sure just about any diet will work if you can stick with it. I found this one too severe.

No, not the Fast Forward plan, and not cold turkey. Honestly, the hunger I felt was the worst I can recall during a diet. In hindsight I should have just added one extra meal a day, or followed the Core program instead, and that probably would have resolved the hunger and prevented the light-headedness.

Also, in hindsight, it would probably be best to simply remove all sugar from one’s diet for a week before starting the plan. This way, the headaches and symptoms of stopping sugar would be resolved beforehand.

Yes and no. I don’t think it’s healthy to feel very hungry. I think it triggers overeating and a fixation on food. But, I was really proud of myself for getting through all of the days despite this. But again, it’s probably not good to mess with one’s body this way.

While I’m still too thick around the middle for my liking (hello, middle age), I can say my weight varies very little which is a big improvement from years ago when it was a yo-yo situation which can be very hard on the heart and metabolism.

Here’s the Cinch/Sass book if you want to give it a try. Always consult your doctor first before starting any diet or exercise program. 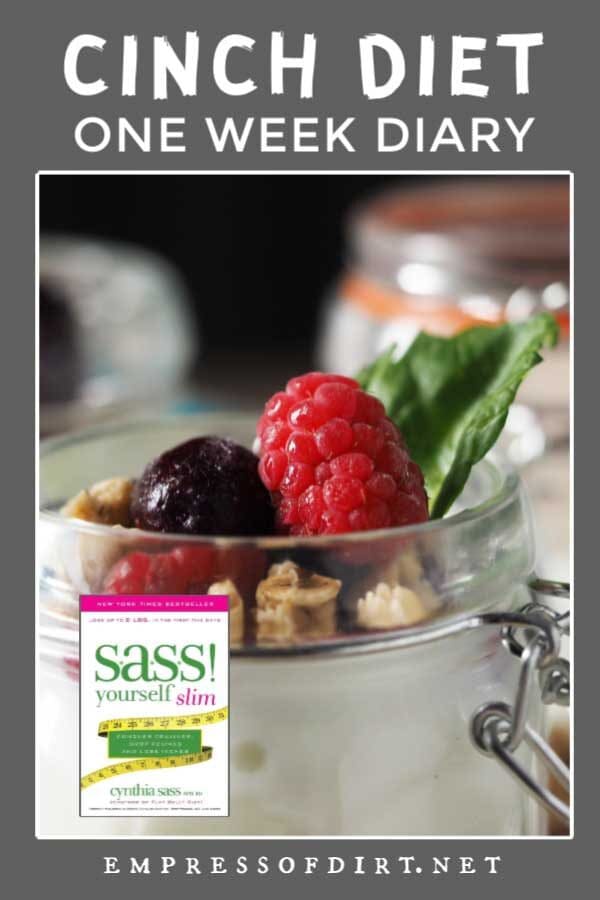