We gardeners love our seed catalogs. They are the botanical equivalent of a dream book—a grower’s wish list. This brief overview takes us through the history of seed and nursery catalogs and how they have evolved over the years.

The Origins of Seed and Plant Catalogs

I send you greetings for the future and my best thanks for the past, and trust I may merit your good will in the future, as I have had evidences of it for many years in the past. I realize fully that my modest little catalogue comes in competition with the largest firms in the country.

Small as my catalogue is, you will note it contains as complete a list of Flower Seeds as the largest. I give my undivided attention to my business. I have no other interests to distract my attention, and I do not delegate it to managers or superintendents as so many larger houses do. If mistakes are made by anyone in my employ, I do not hesitate to correct them at once, and consider you do me a favor to report anything of this kind.

Gardening, an occupation that so many think of so little moment, is to me divine; the mystery and wonder working of nature and the Creator is shown more fully in the development of the little seed than in any other way. We plant a seed and reap a wondrous plant. No occupation is so healthful, so elevating, so satisfying.

Nature stands ready to heap our table with the most healthful of foods, to adorn our houses with the most beautiful of decorations. Food and proper environment shape the human race more than anything else. Meat eating alone tends strongly to savagery. I hope soon to see horticulture taught in every school of the land; I am so strongly impressed with the importance of this, that I firmly believe the fate of the Nation, and the happiness of its people, depends on their willingness to heed the cry, “Back to Nature.”

The First Known Catalog for Gardeners

If you are a fan of vintage seed packets and plant catalogs like I am, you are probably aware of the wonderful, quirky, art-filled seed and nursery trade catalogs from the early 1900s.

The hand-drawn and painted, romanticized illustrations and resplendent plant descriptions made them equal parts information and entertainment while precipitating new cases of plant lust.

Plus, with new printing innovations, delivery methods, and consumer interest, this was a peak era for the competitive world of garden seed businesses.

But that was not the beginning.

The first known garden catalog appeared over 400 years ago at the 1612 Frankfurt Fair with the distribution of the bulb catalog, Florilegium Amplissimum et Selectissimum, by Dutch grower Emmanual Sweerts.

The catalog contained 560 hand-tinted images of flowering bulbs, giving gardeners a glimpse of possibilities for their own gardens.

Many of the illustrations originated in botanical publications—for identifying plants and noting their medicinal uses—but this new publication distributed to fair-goers was a first to present bulbs for sale.

Sweerts died in 1612—the same year the catalog first appeared in print—but it was reprinted for many years to come, right into the Tulipmania period in Dutch history.

More nursery trade catalogs appeared soon after, and, over time, the idea slowly spread to other parts of the world.

If you want to view some of these catalogs online, I’ve listed links in the Resources section.

The next examples—where we have surviving copies of the catalogs today—appear in the late 18th and early 19th centuries.

So many aspects of modern life were changing with new printing methods, improved travel, advances in agriculture, botany, and plant breeding, as well as shifting consumer preferences and cultural trends, and all of this is reflected in the catalogs.

While researching this article, we found one catalog from our area (Waterloo, Ontario, Canada), published in 1827, where the grower boasts a bounty of 20,000 grafted apple trees in his nursery.

The local agent/order-taker for the business in Waterloo was none other than the founder of the village of Waterloo, Abraham Erb.

This kind of association was practical in those days, with limitations on both travel and communications.

Can you imagine going to your local politicians to place your plant orders? That’s considered conflict of interest these days.

You can view a PDF of the catalog here.

This excerpt from the catalog has Mr. Custead lamenting and defending his struggles:

“The nursery business is attended with difficulties and disappointments which ought carefully to be guarded against; mistakes are often made in the proper names of trees, plants, etc. by the ignorant and careless, to the great mortification of the purchaser.

I have been disappointed in this way myself, but the public may rest assured that the greatest care will be taken to prevent such disagreeable occurrences in this establishment, all the business is done by my own hands and I will be accountable for all mistakes of my own making, but there is one cause of disappointment with which the nursery-ma has nothing to do, and for which he is often unjustly blamed.

A person gets a fine apple and enquires its name—a wrong one is given, he sends to the nursery and get trees by this wrong name—after careful culture the fruit appears, and is not what he expected: to prevent disappointments of this kind a person should be very certain that he has got the proper name of his favourite fruit, before he orders trees from the nursery.”

In this next section we see how little advice for planting trees has changed in the past 150 years:

In planting out trees, let the hole be dug sufficiently large to admit the roots in their natural position; particular attention should be paid, that all the wounded parts of the roots are cut off; if a hard marly soil, it would be advisable to have a hole much larger than is required to receive the roots.

Then, fill in good earth from the surface up the proper height. …Care must be observed not to plant the tree too deep; the upper roots when planted, should have about three inches deeper than it stood in the nursery.

Fill the hole with rich mould, and if required, some well-rotted manure. After covering the roots, shake the tree, that the earth may be admitted among all the small roots; then fill up, treading round the tree, leaving a basin round to it to conduct the water to the roots.

The gardening world was forever changed with the work of James Carter, born in England in 1797.

With an incredible combination of business savvy, entrepreneurship, and plant smarts, his influence on the gardening world stretched right into the 21st Century. This article on the history of Carter’s Tested Seeds tells more.

While many older botanical illustrations created for plant collectors are true-to-life, it appears artists hired for garden catalogs—particularly during the romantic and colourful era of the early 1900s—held artistry a tad higher than accuracy.

It’s fun to look through digital archives and find incorrect leaf shapes or formations, flowers with the wrong number of petals or parts, and so on. They definitely took liberties for the sake of a good-looking painting.

While it must have been frustrating for those trying to learn to identify plants, there’s no disputing it was the glamour shot era for plant catalogs.

One of the best-known catalogs today is Burpee’s, which has been in print for over 120 years.

The history of Burpee begins with founder W. Atlee Burpee (born 1858). Burpee was a prolific hen breeder, but he gradually realized that hens were a one-time purchase whereas growers would need to continually buy seeds, so he shifted his focus and began what became the Burpee empire.

Upon his death in 1915, son David took over the business. At the time, Burpee was ‘the largest seed company in the world, mailing over a million catalogs a year, and receiving 10,000 orders a day at its Philadelphia headquarters’. You can read the whole story here.

Many of the old Burpee catalogs and several others including Childs are collected and preserved as works of art and can be viewed online. If you ever notice one in junk sale, nab it!

There’s a lot of history, knowledge, and whimsy in those pages. And plant lust. 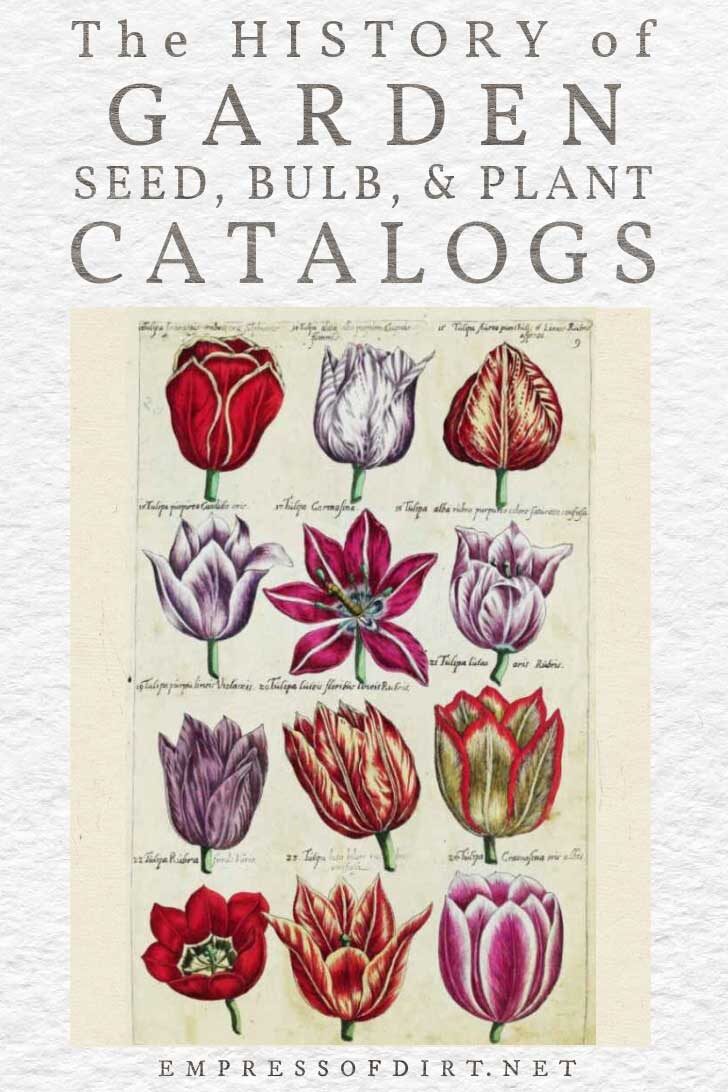