We’re hearing a lot about victory gardens lately as more of us are confined to our homes and looking for ways both to keep active, productive, and grow some of our own food. During both world wars, millions of people began growing vegetables at home to better secure their food supply.

If you are new to growing food, this is a good place to start: How to Grow Your First Vegetable Garden (Right Now).

Victory Gardens in Times of Need

I think every news outlet and gardening site has jumped on the victory garden theme for a story, drawing parallels with our current situation. These turbulent times have large numbers of people ordering seeds and finding out how to grow vegetable gardens at home.

The Origin of the Term Victory Garden

Victory gardens evolved from the ‘war gardens’ of the First World War.

In the United States, the National War Garden Commission said there were 5.3 million gardens in 1918.

After the war ended later that year, they said that ‘the War Garden of 1918 must become the Victory Garden of 1919‘ and we have continued to use the term today.

Victory gardens came back during World War II, with large government-run promotional campaigns in the United States, Canada, Australia, New Zealand, and Britain where the food supply was threatened.

During the peak in 1944, the U.S. Department of Agriculture claimed there were 20 million Victory Gardens, producing nearly 40 percent of the fresh vegetables consumed in the United States. Some historians think the numbers were exaggerated, but there’s no question that lots of people took up gardening at that time.

Related: How to Choose the Perfect Kitchen Garden Location

Garden Tips and Seeds for the People

Without internet in those days new gardeners relied on government- produced informational pamphlets, free seeds, local experts, and information on radio programs and in magazines.

There was debate about whether it was a good idea to encourage first-time gardeners. One worry was that all these people who didn’t know what they were doing were just going to waste a lot of seeds and fertilizer—which were in limited supply—and never grow much of anything. But, ultimately the effort paid off.

In both the United States and Canada, people who lived in cities were inititally discouraged from growing victory gardens.

According to the USDA guide from 1942:

Large-town and city dwellers generally are in no position to undertake gardening successfully…. It is wasteful to attempt gardening in cramped, poorly drained, poorly lighted spots in the heart of a city.

While the concerns had some merit—you do need sun and good soil to grow—we know today that there are many successful urban food growers in less than optimum growing situations.

Some of my favorites are:

Garden Advice Then and Now

Some of the advice in the victory garden pamphlets sounds familiar today, and some of it seems outdated.

For example, gardeners were encouraged to water deeply and less frequently—that’s something we know works best. There is also a lot of deep digging and tilling before sowing, which is something many of us avoid today. And everything is grown in long rows, which is efficient when horses or machinery are used but not always the best use of space for a smaller home garden.

How to Replace Lawn With Wildflower Seed Mix

Organic gardening appears non-existent. All those chemical developed during the war would not go to waste.

Some of the old victory garden footage from the 1940s shows the liberal and reckless application of all sorts of pesticides and herbicides without any protective gear or apparent concern for the side effects. But cabbage worms shall not exist!

If squirrels were ruining your plants, no problem—the official advice was to just leave some strychnine-poisoned oats for them, or maybe use a calcium cyanide fumigant. Mind you, they did advise you avoid breathing the dust.

Once the war ended, most people went back to lawns and flower gardens, but for those critical years, victory gardens were an important symbol, provided food, and gave people a way to participate in a larger effort of international importance.

Grow Your Own Vegetable Garden 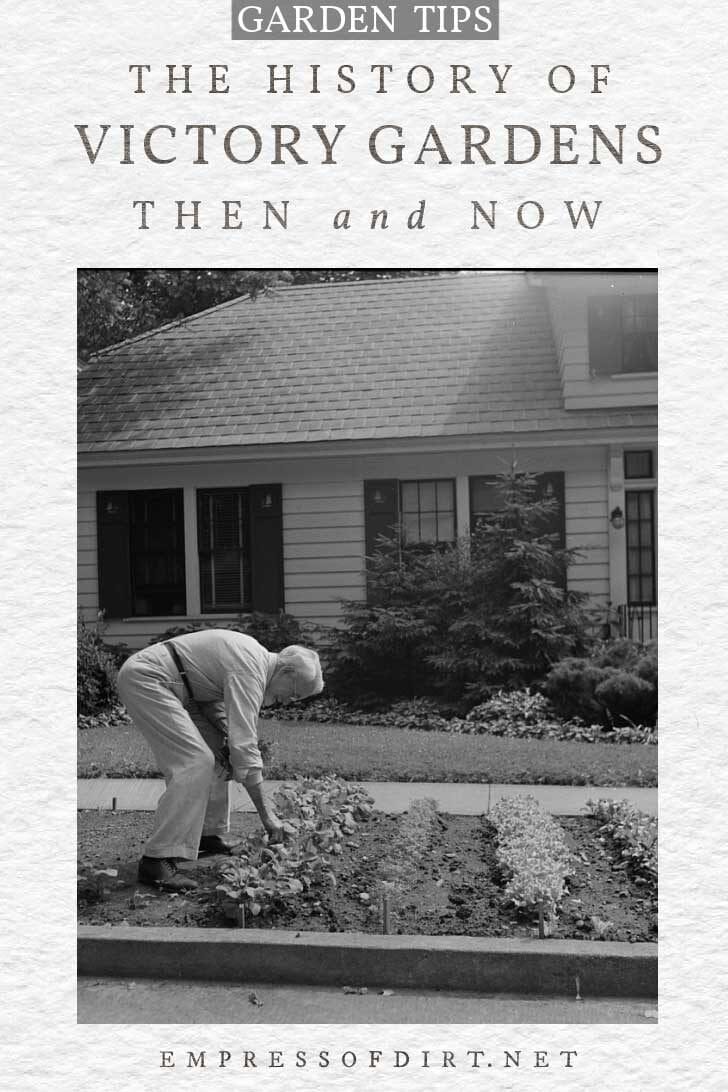