You can transplant raspberry canes in spring or fall. A better location with lots of sun, good air circulation, and well-draining soil can help produce lots more fruit.

To grow fruit in planters, see 12 Best Fruits and Berries to Grow in Containers.

One of things I miss most about our old garden is the strawberries and raspberries. Both were (surprisingly) incredibly happy in that hard clay soil.

June meant mounds of fresh strawberries, and, just as they were finishing up, the raspberries would start ripening, providing fresh berries right through until August and then again in the fall (they were ‘everbearing’ which means they can fruit twice in the growing season.).

What started as a single raspberry cane (year one) gradually morphed into dozens of plants which, by year ten, bordered on invasive status.

On more than one occasion I set out to chop them back and remove some roots, only to find myself sitting on the steps to the deck, rethinking the whole thing as I slowly devoured yet another handful of giant, super sweet berries.

Yes, they can be aggressive growers, but it’s fairly forgivable when it’s a perennial food source that requires very little care.

Ever wonder if some berries in your garden are poisonous?

Where to Grow Raspberries

If you have seen raspberries in the wild you know they do well at edge of woodlands where their feet never dry out but the fruits receive sun.

Raspberries will tolerate a range of conditions from light shade to full sun so long as the roots have consistent moisture without getting waterlogged.

How to Transplant Raspberries

Plant Patents: Some plants are patented and asexual reproduction is not permitted without permission from the patent holder. Patents and trademarks are listed on plant tags.

When is the best time to transplant raspberries?

The best time to trasnplant raspberries is before or after fruiting to avoid interupting this year’s fruit production. Depending on what type you are growing, this could be spring or fall.

It’s easier to move rasberry canes when they are pruned but sometimes you just need to get the task done and cannot wait.

If you want to move them during fruiting, do your best to disturb the roots as little as possible and be sure to keep them well-watered in their new location.

This is the BEFORE picture of the raspberries I moved. They were really struggling in this spot by the fence, probably because of a lot tree roots underfoot and inadequate light.

Get the new location ready before beginning your transplant.

Dig a hole approximately 18-inches wide by 12-inches deep and set soil aside for reuse.

I like to water the hole deeply before planting as well.

When I transplanted mine, I had prepared a bed with composted manure a year earlier, allowing it time to meld with the garden soil.

With your raspberry plant still in the ground, cut the canes down to about 10-inches.

Advice varies (6 to 18″) but 10-inches has always worked well for me. When I trimmed mine, I also removed any dead canes.

Because I’ve trimmed them in spring, I do not expect to get any fruit until next year (on this year’s new growth).

You can also propagate raspberries using the layering method which I have described here.

4Dig Up the Canes

When digging up any plant for transplant, you want to bring as much of the original soil with it as possible.

This prevents any unnecessary disruption to the roots.

I found this easy to do in my old garden which had heavy clay soil. But here in my new sandy garden, all the soil falls away as soon as I lift the plant.

You don’t want to leave the bare roots exposed so either replant immediately or place the roots in warm water or damp soil and transplant as soon as possible.

Can I transplant raspberry suckers?

Yes. Raspberries spread by roots and the new plants that pop up are often called ‘suckers’. You can transplant them.

The key to success is, find a sucker at least a foot or two from the mother plant.

Mark the halfway point between the sucker and the mother plant, and dig there first, cutting that section of root in two.

This should give both plants enough roots to carry on.

It’s early spring as I’m doing this so there’s just a few tiny green shoots and leaf buds, but enough to make me think the plant will survive the move.

If there’s signs of new growth (and no disease present), it’s probably worth transplanting.

Here’s a few examples of the ones I opted to keep. This next one has leaf buds:

This one has a shoot forming from the base:

Plant in the new location at the same soil depth as the original location.

Hold plant in position, spread out roots, and gently add soil, pressing it in place.

Water and top up soil as needed.

Raspberries do best with good air circulation so you don’t want to crowd the plants.

I’m intending to grow mine on supports and prune them regularly so they can be planted just a few feet apart.

Give the newly transplanted canes a good soaking. Fill in any air pockets with more soil.

During the growing season, keep the soil most (not dry or soaking wet).

Add a layer of organic mulch to help retain moisture.

I used straw—and plenty of birds are making use of it too.

Always remove dead, damaged, or diseased canes as soon as you notice them.

If you don’t know which type you have, just watch and note the flowering and fruiting times. Within a year you will know.

Here are some varieties that fruit in fall:

In late fall after the leaves drop, just cut back all the canes that fruited. Easiest pruning ever!

Raspberries are self-fertile which means you don’t have to worry about getting male and female plants. The insects and wind will take care of business.

First come the flowers, and when those are finished, they transform into berries.

Add a new layer of compost or manure late fall or early spring each year to replenish the soil.

To support or not to support, it’s up to you!

Some gardeners train the canes that will fruit in the current year on one side of a wire trellis, and next year’s canes on the other. Very organized!

Some plants, like the red and yellow varieties, are sturdy enough to grow fine without stakes or trellis. Others sprawl and do better with some support.

The goal is to have healthy plants that produce lots of fruit that is easy to pick. How you do it is your business.

No matter what, good air circulation helps reduce the chance of disease.

I hope your raspberry transplanting is a success and there is lots of delicious fruit in your future. 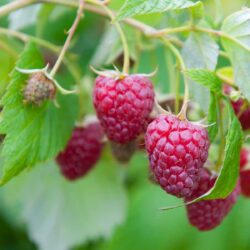 Print Instructions Pin It
5 from 2 votes

How to Transplant Raspberry Canes

How to transplant raspberry plants in the garden to continue growing in a new location.
Total Time20 mins
Author: Melissa J. Will
Cost: $0 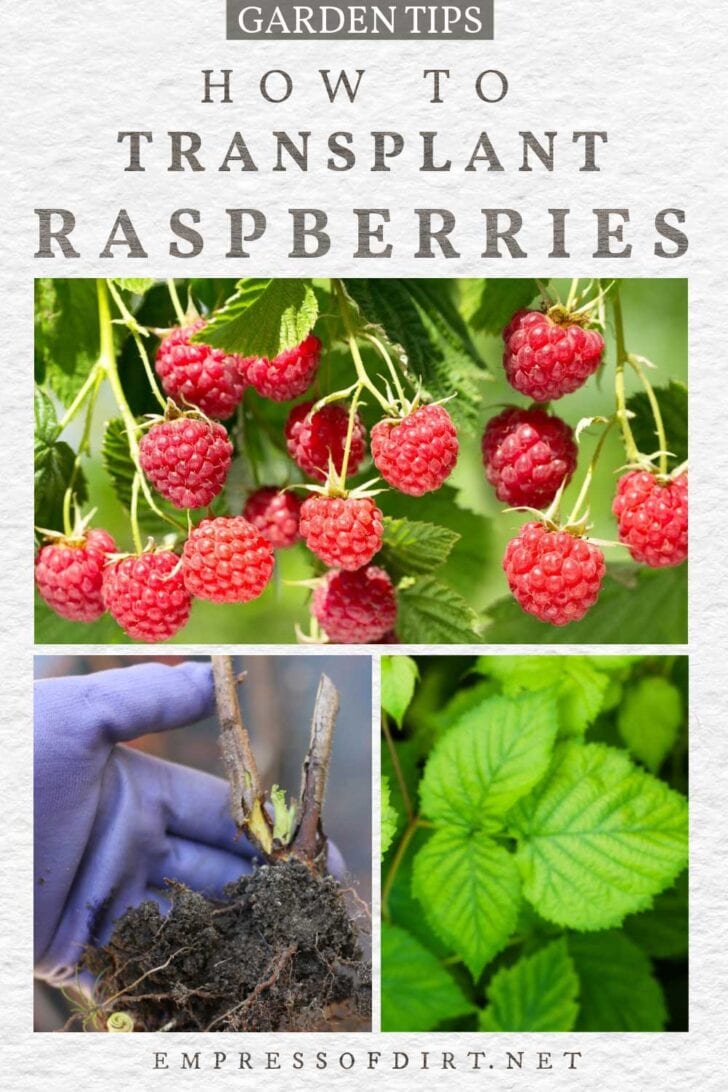