This little city garden features lots of raised beds with vegetables and fruits tucked amongst the perennials and a small pond, showing how you can grow a lot of plants in a small space.

If you love clematis, be sure to check out my tips here: Clematis 101 Easy Care Guide.

This was my first garden which I started from scratch. We moved away several years ago.

When we bought the house, there was just grass lawn and one shrub. It was a clean slate. A pathetic, small clean slate.

Situated on a small urban lot, the main front garden is just 8-feet wide. I didn’t intend to become a front yard vegetable grower but the back yard was too shady for anything to succeed.

This garden appears in the book Gardening Your Front Yard

No one else in the neighborhood had a front garden, and certainly did not have veggie boxes, but my love of gardening was apparently stronger than my fear of bylaw officers, so I went ahead and planted where sun shines.

This first image is from the road.

I jokingly used the broken statue head to hold my bean teepee poles in place but it worked so well I kept using it.

With equal parts perennial flowers , vegetables, herbs, and fruits, the entire front lawn was covered in raised beds and mulch.

I originally planted in the ground but the lawn was sloped and rain storms would wash my compost away. It took a few seasons for me to surrender and take the advice to use raised beds instead.

After just one season with raised beds, I was a convert. Everything did so much better in boxes where I could control the soil and compost.

With everything out in the open and close to the road, I worried my garden might fall prey to vandalism or theft.

Much to my surprise, the garden had the opposite effect.

Nothing was ever damaged or stolen and, when I would work in the garden, all sorts of neighbors would stop by to chat. I am certain without the garden we would have never met.

Some would tell me about the gardens they grew up with, where parents or grandparents grew crops to feed their families each year.

Others would ask questions about how to get started with their own.

If I had extra produce, I was happy to share it, hoping it would offer encouragement.

The garden you see here is included in the book, Gardening Your Front Yard by Tara Nolan. If you are looking for front garden ideas, you will love it.

The ultimate resource for building and growing in raised garden beds.

Pond in a Raised Bed

I originally installed a small pond form in the shady backyard but it wasn’t enjoyed there.

That’s when I got the idea to put it by the front porch.

Because the soil was clay and mixed with rubbish dumped by the house builder, I could not dig a hole for it so I put it in a raised bed instead.

I planted sedums, pansies, and lavender in the box. That was the happiest lavender ever!

Here’s another view of the pond. Over time I filled in the area around it and added fish, of course.

See How to Build a Pond in a Raised Garden Bed

After seeing the success of the raised bed vegetables, I got container-growing-mania. I started growing everything I could think of in pots by the front of the house.

Related: Grow Veggies in Containers From Spring to Fall

Stepping out the front door to pick food for dinner is the best.

I was trying to find ‘before’ pictures but I don’t think I took any. This next one was taken in spring just after replacing the wood on one of the boxes and shows the basic layout.

After careful study I can confirm you cannot grow enough flowers. More is more.

It was in this garden that I started growing a lot of my own plants from seed.

Everything you need to get started with indoor seed starting for indoor and outdoor plants.

Grow what you want—any time of year!

Side Garden with Pathway

The side of the house was long, narrow, and sloped. Despite limited dappled sun, it ended up being an excellent place to grow delphiniums.

In this next photo you can see some garden art on the fence, lilies, arbor with vine, and a mass of raspberry bushes on the right side of the image.

Next to the side garden was our back deck, high up off the ground. I took this next photo from up on the deck looking down at the lilies.

This was a year or two before we started getting red lily beetles which eventually destroyed all of them.

Because the side garden was so narrow, it was hard to see the garden from the house. I placed mirrors on the fences so I could see the flowers from the kitchen window.

This has more photos of my garden mirrors: 15 Garden Mirror Ideas for Backyards.

Once you add a source of water (the pond) and lots of plants, wildlife moves in—exactly as I hoped.

It felt like wild bird headquarters and I loved it.

Eventually I got a new neighbor who also loved gardening and we joined our front side beds together to form one mass of beautiful plants.

The neighbor behind us had a lot of fruit trees and pet chickens (not shown) which gave a nice country vibe despite being in a city.

In the last year we lived there, we made some huge changes, unaware we would be moving soon.

We added a small swimming pool with two levels of decking. The top one was enclosed to make it a three-season sitting space.

The clematis vine you see in the next photo just flourished in that location. We moved the following winter and I couldn’t bring it with me which kind of broke my heart.

In fact, I realized after we did move and I was starting our current garden from scratch that I really missed the old garden and I felt myself mourning the loss each spring. Grief is such an odd beast.

One funny last memory is this raccoon. I was swinging on the porch swing one day and felt a little extra weight as I went back and forth. I lifted a blanket to find this baby raccoon snoring underneath.

When I said our garden became wildlife central, I wasn’t kidding.

I hope you enjoyed this little tour of our old garden.

It’s where I learned to grow plants through much trial and error and I’ll always have fond memories of it. 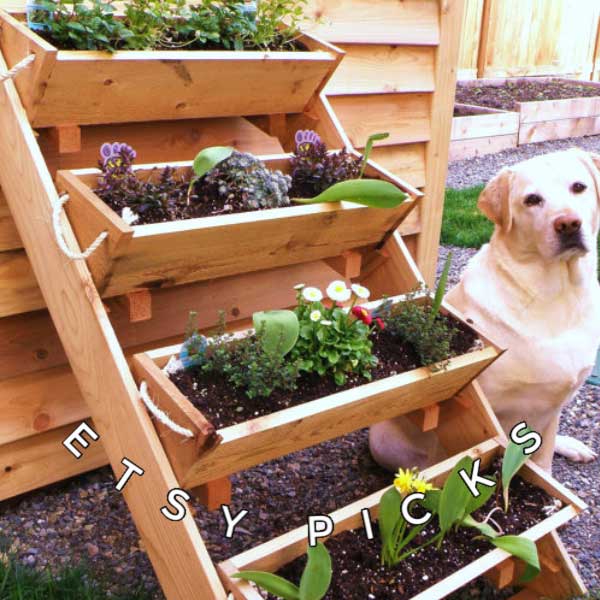 Etsy Favourites with a Garden Twist 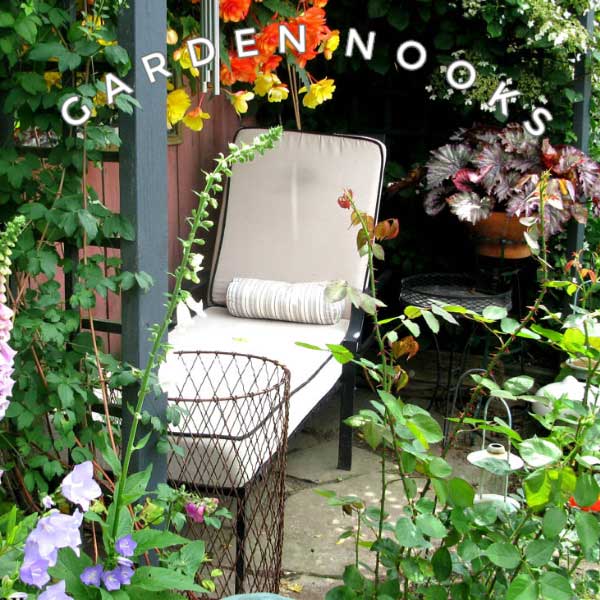 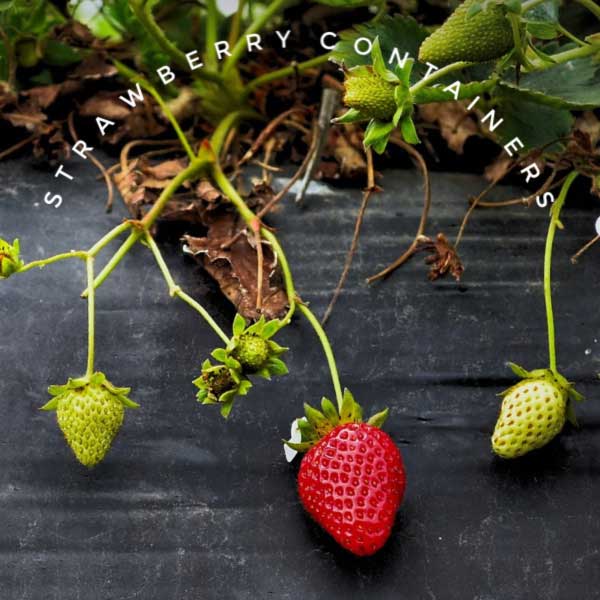 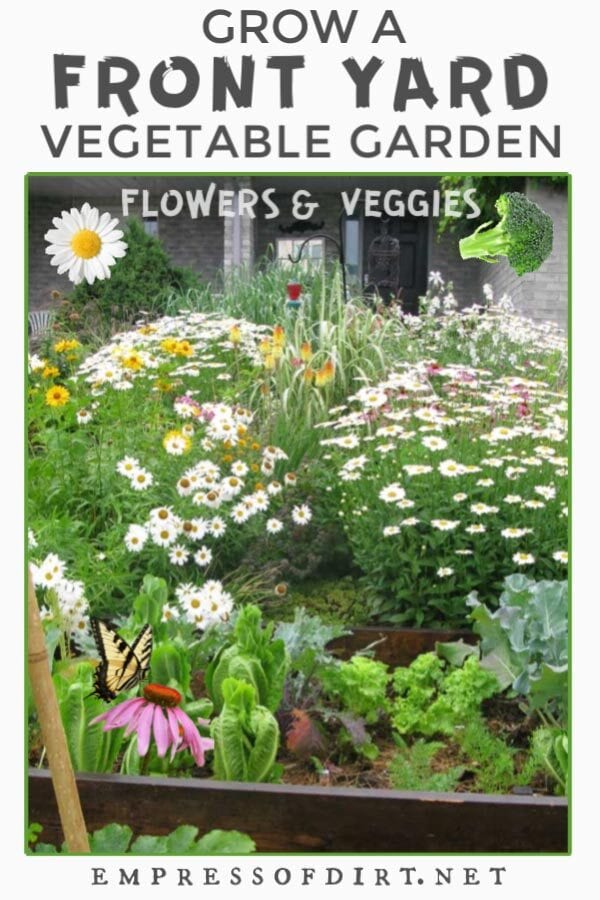