It can surprise gardeners to learn that some of the plants growing in their gardens are actually patented and propagation of any plant parts is prohibited by law. Whether this would ever be enforced by the patent holder is impossible to determine, but its good to know what the laws cover to avoid any potential issues.

The information contained in this site is provided for informational purposes only and should not be construed as legal advice on any subject matter.

It surprises a lot of gardeners to learn some of their plants may be legally patented and, by law, they do not have the rights to propagate them by cuttings, division, or seed saving.

This gives an overview of plant patents to help you understood what it could mean for you and your garden.

Are Your Plants Patented?

Let’s say you buy a plant from the garden nursery and plant it in your home garden. The plant gets lush and beautiful so you decide to divide it or take cuttings so you can have even more.

Or maybe a friend admires the plant and asks if they can take a cutting.

So what’s the issue?

In some cases when you propagate a plant you are breaking the law even though you own the plant.

It may well be that the company or person—the patent holder—who would have the right to sue you, would not care if they found out.

And, realistically, how would they find out if, for example, you divided a plant in your garden?

But that is their choice to make. They do have the legal right to stop you or demand payment and there are no fair use exemptions for home gardeners.

The Lifespan of Plant Patents

The exact terminology varies from country to country but the patent is noted on plant tags in several possible ways:

or something similar. There may even be a patent number listed.

Any of those things are a sign that someone, usually a company but it could be an individual doing plant breeding on their own, have applied for or received some form of certification that they own the rights to that variety of plant. Either they created it or acquired the rights to it.

With those rights, they can stop others from producing that variety, or even distributing or selling it. And they can sue anyone who does, although I don’t know if it has ever come to that with a gardener propagating a plant for their own garden.

Plant patents last 20 years from the date of certification, which could be a few years after if was applied for.

Typically, the rights to the plant last 20 years from the date of certification, which could be a few years after if was applied for. This could mean nearly a quarter century where they have exclusive right to control how that variety is produced and sold.

Plant patents cannot be renewed. Once a patent expires, anyone is free to propagate them.

After that time period, because plant patents cannot be renewed, anyone is free to propagate them through cuttings or some other method. This means a plant patented back in 1999 may just now in 2021 be patent-free. That’s a long time to wait to take a cutting or transplant some runners!

On the flip side, plant breeders do not go through all the time and expense of getting this protection just to stop some random gardener from taking a cutting. They could, by rights, but that’s not the aim.

Really they just don’t want to spend a lot of time developing a variety—something new and distinct—just to have some other company—a competitor, perhaps—start propagating cuttings and selling them.

The patent period provides time to recoup expenses and make some money.

Plant Patents Around the Globe

Over ninety-percent of countries in the world are members of the World Trade Organization which requires some form of intellectual property protection for new plant varieties.

Most of those countries are also members of the International Union for the Protection of New Varieties of Plants (UPOV) established in the 1960s. All member countries have similar laws.

Some countries like the United States and Australia will allow plants to be given regular patents—utility patents—just like the kind you would get if you invented a new widget.

Others like Canada, the EU, and UK have a separate category of protections for plants, usually called plant breeder’s rights, different from a patent but not that different—although patent lawyers may disagree with that description.

So, it’s not exactly the same everywhere but it’s pretty similar in most places. With every new international trade agreement, there is more pressure for countries to harmonize these laws.

Unless you live in North Korea or one of the few other countries that are not part of these agreements, there is almost certainly an intellectual property protection law for new plant varieties that apply to you.

Again, no one will likely ever know if you take a cutting, and chances are no one would really care, but the rights holder can care if they choose.

Patents are different from trademarks, which are another form of intellectual property. You will often see the encircled R or a TM next to some plant names. That has nothing to do with patents, so you cannot tell from a trademark symbol if a plant is patented or protected by plant breeders’ rights.

A trademark is a right, or at least a claimed right, to the name, not the actual plant. It is a name the company has chosen to sell the plant under, often something distinct and memorable they hope will boost sales. Proven Winners is very good at this, choosing fun and catchy trademarked names for their plants—and all of their plants are patented too.

Unlike a patent, a company can hold a trademark forever, so long as they keep using it. The plant will also have its botanical name that anyone can use, but only the trademark holder or a licensee can sell it under the trademarked name.

And that’s it for plants and intellectual property. I’ll leave you to decide what goes on in your garden but know the laws are there to protect the breeders of new varieties. 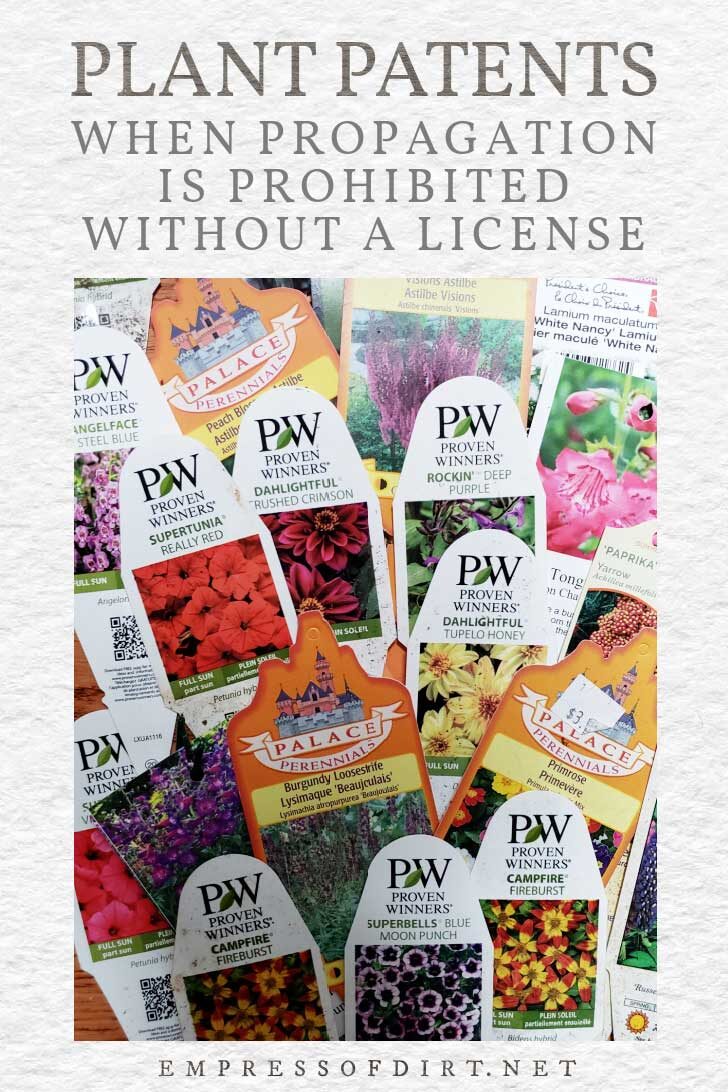