Does putting eggshells in your garden really help your plants grow? Will the calcium in the eggshells give your plants an extra boost? Can crushed eggshells stop slugs? Let’s see what we know about eggshells as nutrients and pest-blockers.

There is a lot of advice for gardeners that is either exagerated, misleading, or one of many garden myths, and we all fall for them at some point!

Should We Add Eggshells to the Garden?

Gardeners sure love to add eggshells to their gardens and all sorts of claims are made about their effects on plants. But, as you’ll see, much of this is anecdotal, and while they really won’t do harm, they just don’t have the superpowers we wish they did.

Do Eggshells Really Give Plants a Boost?

So, are eggshells good for your garden?

Plenty of people think so, but the short answer is, no: not for short-term plant boosting.

It’s easy to understand why this gardening myth refuses to die.

So, let’s put it in the garden!

And, it’s not entirely a myth. Your plants do need calcium and eggshells provide it—that part’s true!

But, there’s probably plenty of calcium in your soil already, so adding more calcium isn’t going to change anything.

And, even if extra calcium would help, eggshells aren’t the best way to do it.

Unless you grind them to a very fine powder, they’re just going to sit in your soil as broken eggshells for years until they decompose. And even if you do grind them into powder, there is little or no value.

Either way, they will eventually decompose, so maybe they’ll help your garden many years from now—again, only if your soil is calcium deficient—which it probably won’t be—but this is all contradictory to the common advice we hear in garden forums.

That said, the eggshells aren’t going to do any harm, can contribute to soil structure, and composting them is better than sending food waste to landfill, but just don’t expect to see any improvements in your garden because of them.

If anyone tells you their plants changed quickly after adding eggshells to the soil, it’s a classic case of confusing correlation with cause and anecdotal at best.

You will sometimes hear it said that adding eggshells will prevent what’s known as blossom end rot (BER), a problem that shows up during some tomato growing seasons.

After checking the research it seems that what causes BER is not entirely understood.

This condition does relate to calcium uptake and moisture stress (uneven watering) but is usually not caused by calcium deficiency in the soil.

More commonly, the problem is that the plant isn’t absorbing the calcium that is in the soil, and adding eggshells isn’t going to address that problem.

In other words, it may be a calcium uptake problem, not a calcium deficiency issue.

The popular advice to add tums or eggshells to solve the problem is a myth.

If the problem persists, this is where a good soil test from an accredited lab can provide a complete analysis and any recommendations.

But, most often, BER is a one-time issue and the next growing season will be fine.

Eggshells In the Compost Bin

So, it may sound good, but no matter how many times you’ve heard this one, and will continue to hear it, the best evidence we have says that adding eggshells is not going to provide any immediate benefit to your garden.

Or, at least not any of the benefits that popular gardening advice claims they do.

The will add some calcium at some point—gradually, after many years—but most of our gardens are not calcium deficient so it’s not really essential.

But, composting avoids sending things to landfill, and that’s good.

Mash up your eggshells prior to composting to avoid waiting years for those shells to crumble and continue adding a good variety of greens and browns to your bin.

Do Eggshells Deter Slugs or Snails?

The idea of using a barrier of crushed up egg shells around a plant we are trying to protect from snails is often recommended but neither proven nor practical.

The idea is that the sharp edges of the shells might physically hurt the slugs and deter them from proceeding over them.

But these animals have an excellent, slime-like substance (mucous) on their bodies along with extremely tough skin that both protects them from hazards like this and also assists with their mobility. Some sharp shells are not going to stop them!

This video shows how they behave when surrounded by crushed eggshells.

After watching, be sure to check out these tips for dealing with slugs and snails.

Garden forums are filled with testimonies claiming that adding eggshells (and sometimes whole eggs) gives a same-season boost to plants.

Here’s what we know:

Soil | The foundation of your garden. Know what you’ve got and provide only what it needs.
• Mulch | Add 2-inches of organic matter to protect soil, retain moisture, and gradually fertilize your soil.
• Leaves | Finely chopped fall leaves make excellent mulch.
• Leaf Mold | Decomposed fall leaves beneficial to soil structure.
• Compost: Decomposed organic matter providing nutrients for the garden.
• Potting Mix | Contains no soil: designed to optimize plant growth in pots.
• Seed Starting Mix | A lightweight potting mix for sowing seeds in containers.
• Soil pH | Knowing your level (which may vary) is informational, not a call to action. Most soils fall in the range of 5 to 8 and accommodate a wide range of plants. 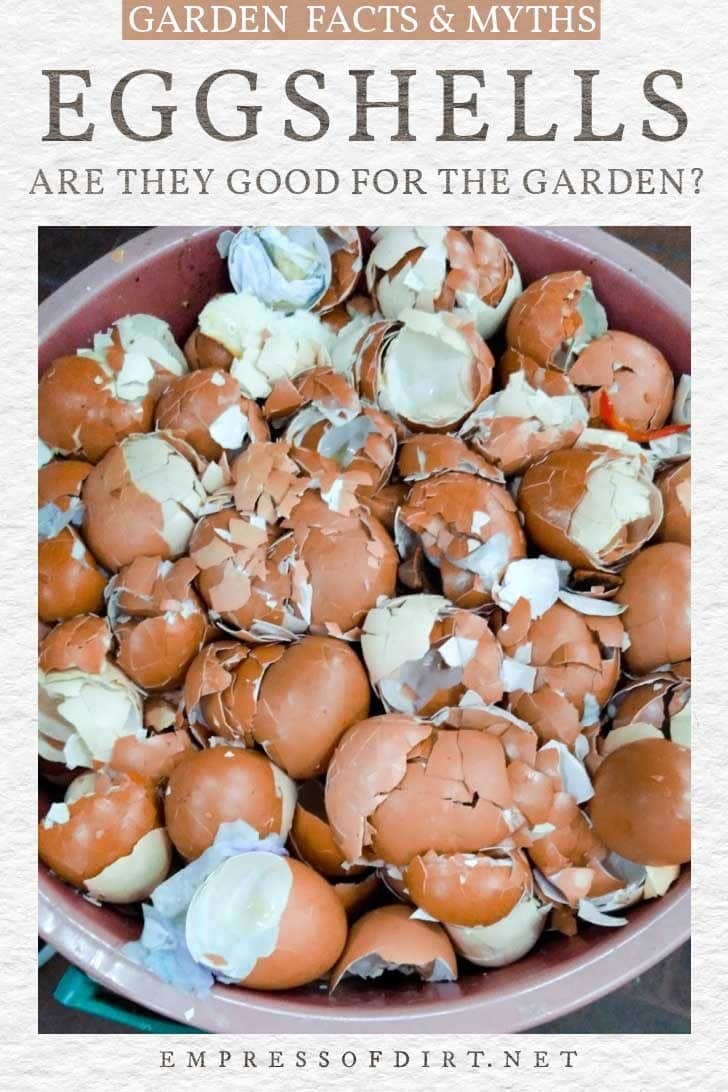