Gardeners share all sorts of anecdotal tips, convinced what worked for them will work for you. But why do so many of these tips seem to work for some and not for others? Let’s look at some common examples and see what’s going on.

If this topic interests you, you will also enjoy Popular Garden Myths We’ve All Fallen For.

The Problem With Anecdotal Garden Advice

1: based on or consisting of reports or observations of usually unscientific observers
// anecdotal evidence
// health benefits that may be more anecdotal than factual

Many of us have seen—and probably shared—anecdotal garden tips and tried applying them to our own gardens.

Here are some examples.

‘My grandmother always added crushed eggshells when planting tomatoes and it worked great.’

‘I water my African violets with milk and they bloom like crazy.’

‘My friend adds Epsom salt to her watering can and her vegetables are huge.’

And on and on it goes.

So what’s the problem? Why isn’t this evidence?

And what do we mean by this?

The variables are all the possible factors at play contributing to the plant’s success.

Just to be clear, if we say our grandmother added crushed eggshells to her tomatoes and they were great, by questioning it we are not criticizing our grandmother or her beautiful garden.

We’re simply pointing out that the assumption that the eggshells were pivotal in this success is conjecture or anecdotal evidence, not science.

Because all of the other possible contributing factors have not been ruled out.

It may seem like the only difference was adding eggshells, or milk, or Epsom salt or whatever, but it’s just not so.

Our gardens, plants, and growing conditions are ever-changing with lots of—you guessed it—variations from one day to the next, and year over year. While we’re focussing on this one thing, there are countless other contributing factors at play. I’ll explain more about this below.

And because it’s anecdotal, we can’t form any firm conclusions.

Anecdotes may be a good reason to investigate something, but, as evidence they are flimsy. And correlation is not cause.

Plus, we have science. What we already know helps us rule some things out right off the bat.

The rest require further study to pass muster (see the suggested A/B test below). But without further examination, they are just conjecture.

If you spend any time in online garden forums you know how insulted people feel when their anecdotal tips are questioned.

But it’s really not personal. It’s simply pointing out that anecdotes are not scientific proof. And, in some cases we already have the science to debunk them.

A huge step forward would be to understand what conjecture is and why it is not scientific, present anecdotes for what they are, and allow room for healthy skepticism—if reliable garden tips are really the common goal.

To dig further, let’s look at some of those variables to see why they matter.

Related: Are Epsom Salt Good for Plants or a Garden Myth?

Let’s see how these variables matter.

For the sake of argument, we’ll assume the plants did thrive.

So we’re not doubting that.

The problem comes when assuming the eggshells, milk, or Epsom salt, were truly responsible for that success.

While there is so much more to be discovered, science does know the basics about what plants need to grow.

In most cases this is:

And, of course, starting with healthy, viable plants or seeds.

These are some of the possible variables I mentioned.

When plants do well in our homes or gardens, each of these factors will be within adequate ranges for the specific plant species.

When our plants struggle or die, one or more of these things is amiss.

So, let’s go back to the example of adding eggshells to the soil when planting tomatoes.

Anecdotal evidence assumes the eggshells are the secret to success: the missing ingredient every garden needs.

We’ll ignore all the gardeners who grow stellar tomato crops without ever doing this. That alone tells us it’s not a basic, universal, must-have plant food some are implying.

So, we’ve already downgraded the tip to maybe in certain circumstances this might work?

Let’s go with an example of someone who never had good tomato crops until they tried this. But the one year they try eggshells in the soil, the plants do nicely.

We’ll also ignore the fact that we don’t know anything about the eggshells used (another potential variable).

So maybe her plants needed something the others did not? Maybe the eggshells have a key nutrient that was previously lacking?

You still don’t know it was the eggshells that did it.

But it’s the same garden!

We also start with different tomato plants or seeds each year. And with all these variables, that’s why our gardens are not exactly the same one year to the next. And the growing conditions for your tomatoes were not the same last year as this year. And this is why it’s just not accurate to say the eggshells were the only difference: there are all sorts of variables at play.

To demonstrate it, we’d need all those variables the same to proceed with comparing some plants growing with the eggshell treatment and others not.

Then we’d start to have some evidence.

But until then, as much as we may feel sure our tip is a good one, it remains anecdotal.

What the Science Shows

The eggshell example is one where a lot of research already exists.

We’ve gone over it in more detail here: Are Eggshells Good for the Garden?

Bottom line, they are not a fast-acting superfood for our plants. And, the common assumption that eggshells have calcium that tomatoes desperately need and are ready to gobble it up is not accurate. Most soils have sufficient calcium levels and when the plant is lacking it, it can mean it’s not available in a form the plant can take up.

I kind of spoiled it by using the eggshell example which we know doesn’t work, but if you have a tip you want to test, you can create your own A/B tests at home to investigate further.

I do these for lots of things I’m curious about including this experiment to get better delphinium seed germination rates.

If you want to investigate anecdotal (or any) garden tips, besides checking existing research, you could try your own A/B testing.

The goal is to demonstrate a cause under neutral conditions that can be checked and rechecked.

Try growing some tomatoes with and without eggshells. You will have to decide the source of the eggshells, how they are prepared, and what volumes you will use and keep applications consistent.

Start with at least 10 plants from the same source (pack of transplants or seeds).

This will still be imperfect but do what you can to make all inputs the same right down to how much sunlight each plant receives.

Since we know which basic factors are key to successful growth, it is only when those conditions are the same that we can begin to examine other inputs—identical in quality, volume, and application—to begin looking at their influence on plant growth.

With all these things the same, we can do a basic A/B test.

Five of the plants will have plain potting mix, the rest will get X amount of crushed or pulverized eggshells mixed into their potting mix, all done at the same time in the same manner.

Some gardeners like to do blind tests where they do not know which pots have the additives in case this subconsciously influences their treatment of each plant.

It’s still citizen science, but, when done carefully, an A/B test could show if there might be some sort of correlation between the eggshells and the plant growth. Or, spoiler alert, not.

You’ll know you might be onto something when hundreds of other growers do the same thing—under similar strict testing conditions—and get the same results, over and over again.

And until then, it’s anecdotal.

Be a Good Skeptic

Whether it’s eggshells, milk, Epsom salt, or anything else, always consider the big picture.

The well-intended gardener who insists her eggshells are the miracle cure and you should try them is probably overlooking the best garden tips of all.

Her plants may be doing great—and that’s great—but, with what we know about plant health and nutrition, it’s the basics that really deserve credit.

So what about watering violets with milk or adding Epsom salt to soil?

Each of these anecdotal tips is different but you can start assessing them with some basic questions.

Again, you never know when a new discovery or innovation is coming, but, when it comes to our gardens, it pays to stick with the fundamentals, learn through experience, embrace the science, be a healthy skeptic, conduct your own experiments—and do what clearly works for you, and acknowledge when tips are purely anecdotal. 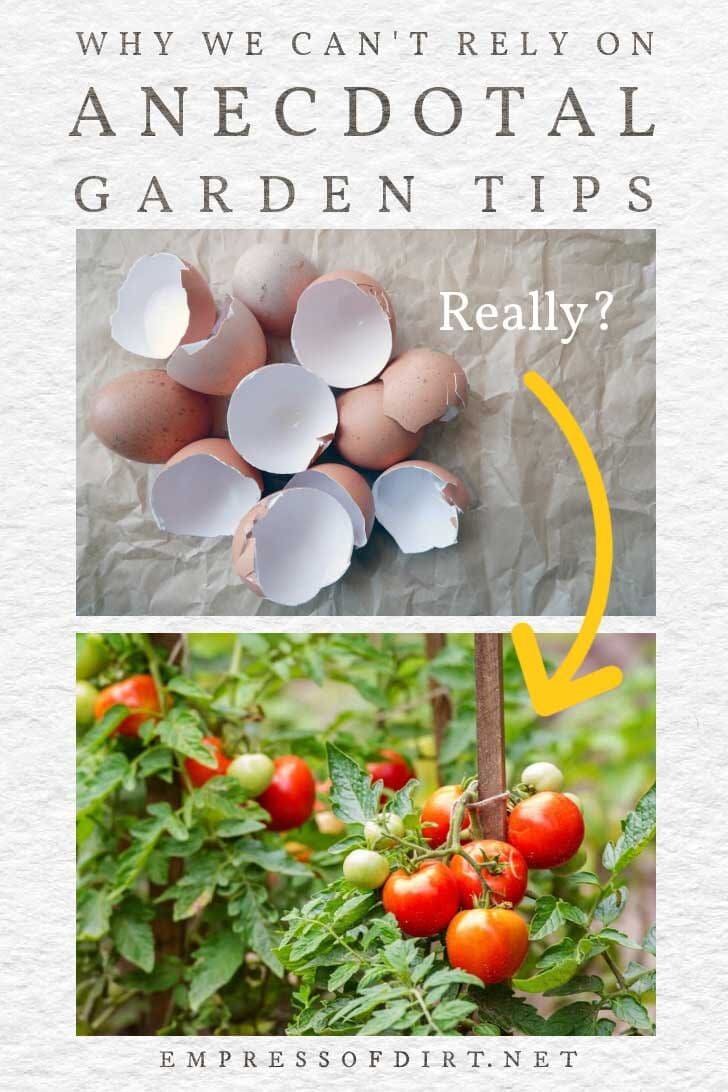