The fall hummingbird migration south from parts of Canada and the United States begins as temperatures start to cool. When it begins depends on the location and how far they have to travel. Find out what to expect as these tiny birds make the long, solo flights to their winter homes.

When do hummingbirds start making their journey south for the winter?

It depends entirely on their summer location and how far they have to go. With the change of the seasons, their primary food sources—bugs for protein and flower nectar for carbs—become scarce and that signals it’s time to head to warmer regions.

Hummingbirds are found in the Americas all the way to Alaska, through parts of Canada and the United States, to the southern tip of South America, and the Caribbean as well.

Some hummingbirds in warmer climates never migrate for mating season. Others make the journey north to spend the summer in various parts of the United States and Canada.

Unlike the spring migration where you start noticing hummingbirds in the garden, their departure in fall takes observations over time. One day you think, I haven’t seen one in several days or more—and at some point realize they must have moved on.

Where we live in Ontario, Canada, the first spring arrivals appear in late April and early May. Plenty of hummingbirds may pass through our area and a few will stay and raise their young.

And, while we think of migrations as flocks, hummingbirds travel solo. It’s quite a feat for a tiny bird on its own.

The hummingbird migration map here is handy for knowing arrival dates each year.

After spending the summer mating season in northern areas, with winter looming, late summer and fall is the time for hummingbirds to make the long journey south once again.

When they go will depend on where you live and how far they have to go. This may be during August, September, October, or November, depending on location.

Unless we see hummingbirds every day in the garden, we may not notice they have left until many days or weeks of absence.

It’s always bittersweet to say farewell but their return in the new year is a most welcome sign of spring.

It not easy to track these birds—especially during the fall migration—but, from what we know, they do not necessarily take the same route south in fall that brought them north in spring—that’s why there is no tracking map. It’s an entirely different journey.

Let’s look at their fall feeding habits, what we can do, and where they go at this time of year.

While some hummingbirds in the Western United States do not migrate, most of our ruby-throated hummingbirds will make the long trek south every fall—starting around Labor Day in early September—all the way to Mexico and Central America, where food will be much more abundant over the winter.

For us in southwestern Ontario, the last ones pass by in mid-October, just ahead of first frosts.

For years it was believed that providing nectar (sugar water) feeders (or birdseed for other migrating birds) may be harmful in autumn, enticing the birds to stay on until it’s too late to head south. This has more on feeding hummingbirds in fall.

Today, it’s felt that providing this supplemental food source simply helps them fuel up for their journey and will not delay them.

The main staple of a hummingbird’s diet is protein-rich invertebrates.

The main staple of a hummingbird’s diet is protein-rich invertebrates likes insects, spiders, and various larvae along with nectar from natural sources. As those natural resources wane, it’s time to fly!

There’s no perfect feeder but this is the best I have found. It’s easy to clean and gives the birds a perch while they’re feeding.

If you find ants are invading your feeder, an ant moat will stop them.

As they head south, some migrating hummingbirds will be happy with conditions in Texas, Florida and the Gulf Coast and stop there for the winter. But most go farther south.

It’s quite a journey for the Rufous hummingbirds that start from Alaska—travelling around 4,000 miles or 6,000 kilometers over the course of a few weeks.

It’s not quite as far for the Ruby-throated hummingbirds that we have in the east—and into Western Canada as well.

But it can still be a couple thousand miles for them. Plus they have the Gulf of Mexico to contend with.

Even the shortest path over the Gulf is about 600 miles with no place to rest.

We actually don’t know for sure whether they fly over or around the Gulf, but, either way, it’s an incredible journey.

Young Hummingbirds Know the Way—All on Their Own

Ruby-throated hummingbirds are capable of storing enough fuel—mostly from nectar—to fly that far under the right weather conditions, but conditions in the early fall are often not right.

What’s amazing is that hummingbirds born just a couple of months earlier—and who have never been to Central America—will make the journey on their own. We have much to learn about how they find their way.

Also, despite the folklore, no they do not hitch rides on geese, which was apparently a popular belief many years ago. It’s a fun idea, but no such luck.

So, your wee friends from the feeders over the summer will probably be arriving in Mexico and Central America over the next couple of weeks and enjoying the nectar and insects there, along with warmer temperatures.

Be ready in spring with your feeders filled as some of the very same hummingbirds will indeed return to their favorite summer nesting spots once again.

I like this style of feeder for a few reasons. First, it provides a perch for the birds as they feed. This is important so they don’t waste energy. Also, it’s easy to clean, which helps prevent disease. 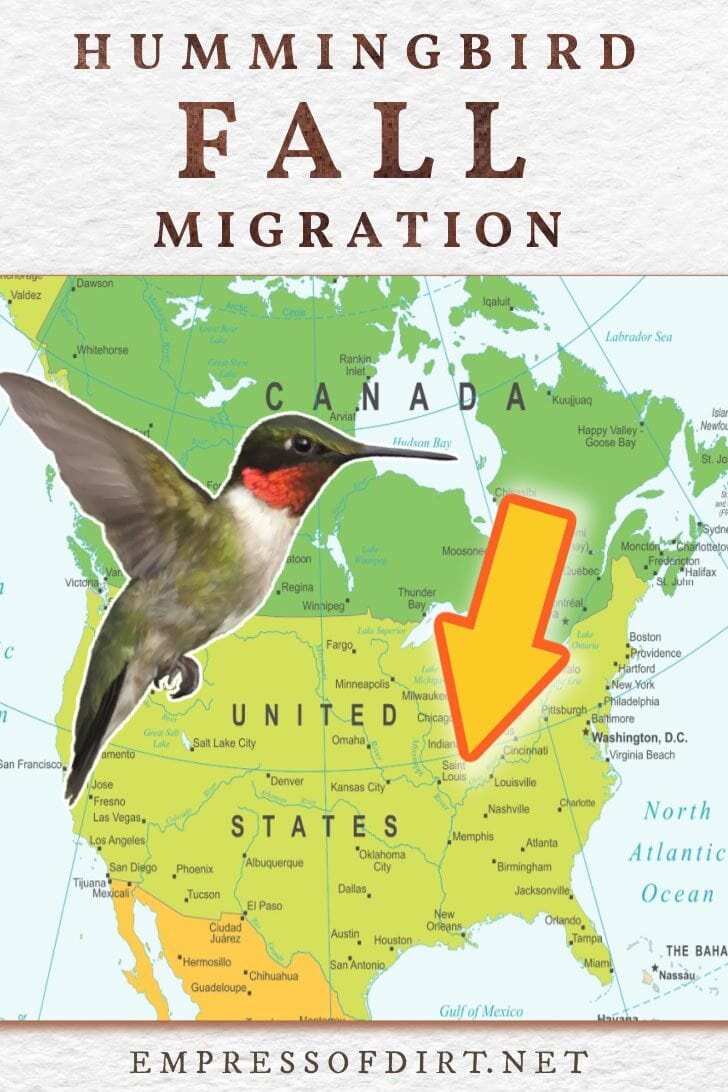