If you are gardening in a cold climate, it’s helpful to know the distinction between frosts and freezing and why it’s not just the number on the thermometer that matters. There’s a lot going on within plants as temperatures swing around the freezing mark.

For more beginner tips, also see How to Overwinter Plants.

Frosts Versus Freezing: What’s the Difference?

We tend to call an end to the growing season once frosts or freezing temperatures (32°F or O°C or lower) are in the forecast—unless we have a winter vegetable garden—and while it’s true that winter will eventually come and hardy plants will rest in dormancy, the dynamics are far more fluid and interesting than that.

How plants respond to cold weather and icy conditions depends on many things from genetics to how persistent the conditions are. A frost may change nothing or everything and it’s not over until it’s over.

Come along as we look at what’s really going on and what we can do to give our plants their best chance to survive and thrive.

What temperature is freezing?

Or, the process of solidification of water and the formation of ice in aqueous solutions. (The water in the ice cube tray is freezing.)

However, as explained below, water does not always freeze at this temperature—not even the water within plants—although this is the temperature when ice usually begins to melt. Hence, we say this temperature is ‘freezing’ but it doesn’t mean water freezes.

At what temperature does frost occur?

Frost | A thin layer of ice crystals that forms on grass or other surfaces from the moisture (water vapor) in the air. This can occur at temperatures at or around freezing (32°F or 0°C) depending on conditions.

Today we most commonly use frost to refer to ice crystals that form on the ground.

How Does Frost Form?

Warm air can hold more water than cold air. So, as the temperature drops, the air has less capacity to hold water.

The dew point is the temperature at which the air is holding all the water it can and any further drop in temperature means that water vapor from the air will become dew or frost, depending on whether or not it freezes as it’s released from the air.

This is why you can have freezing temperatures without frost if you aren’t below the dew point. And you can also get frost on the ground even when your air temperature is above freezing.

For plants, the freezing point can be somewhere around 28°F (-2°C ), causing what we call a killing frost but is usually really a killing freeze.

Our Cool Planet
Two-thirds (66%) of the Earth’s land surface usually gets freezing temperatures at some point each year. While much of this is sparsely populated areas, most of us live where freezing is possible.

Have you ever noticed that a frost or freeze doesn’t always kill off tender foliage?

Seeing frost on the ground or temperatures below 32°F (0°C) tells us we’re entering risky territory but these factors alone do not spell doom for plants.

The temperature range where damage can occur is much wider depending on the plant and the conditions.

For some non-hardy or tender tropical, subtropical, and other immature plants, the damage often happens before temperatures get that low because they do not have the protective barriers that hardier plants do. You see this with warm-lovers like tomatoes and peppers.

This effect is called chilling. If you know much about biomembrane viscosity and ion transporters then you’re one up on me, but they’re among the things in plants that can be affected by cold temperatures, even when they’re still above freezing.

And chilling injuries can take a while to be visible, so, even if your plant looks fine after cold exposure, it doesn’t mean damage has not occurred. It may become visible days or weeks later.

This is why it’s helpful to learn the temperature tolerances of each specific plant you grow and protect them accordingly.

As we’ve mentioned, how plants cope with freezing temperatures varies.

Cold hardy plants are better equipped to prevent ice crystals from forming in their cells where the real damage happens.

Tender plants struggle with the dehydration that comes with having water pulled out of their cells by ice crystals on their surface.

A rogue frost or freeze alone may do little harm. It’s the prolonged or rapid exposure to freezing temperatures or the back-and-forth cycling between freezing and thawing that really causes problems. At some point the plant cannot keep up and the water freezes inside.

Researchers have also found that a plant’s resistance to freezing can be very different at different times of the year. A temperature that would give them no problems in the winter may be overwhelming in spring when active growth has resumed. I see this a lot with my own plants.

The Freezing Point of Water

While we’re told in science class that the freezing point of water is 32°F (0°C), water is much more versatile than that. This is the temperature where ice will usually melt and become water but the reverse is not necessarily true.

And water in plant tissues usually will not freeze at 32°F (0°C)—even in plants that aren’t cold-hardy.

This is because water can remain in a liquid state even below freezing temperatures.

To illustrate this point, have a look at this video demonstrating supercooling.

A bottle of water is placed in a freezer for a few hours. The timing has to be just right, but, if it is, it will still be liquid when removed from the freezer. But, when banged on a table or poured into a bowl of ice, it immediately turns to ice. It’s so rapid that you can build an ice tower from the pouring water. Very cool!

And, one more super cool example: there are experiments where water—pure water—has been taken down to minus 55F (-48C) without it becoming ice.

Clearly water is far more interesting and complex than we thought.

With plants, if temperatures fall a bit below freezing, probably not much is going to happen. The water in the plant tissues will still be liquid. To freeze, it needs a process called nucleation which is what takes place in the supercooling video.

Nucleation in plants is a complex topic but it’s essentially what gets the ball rolling for ice formation.

So, yes, you need freezing temperatures to freeze plants, but you also need a nucleator. Ice crystals usually won’t even start to form in plants until temperatures are below freezing, and then, even when they do, some plants —cold-hardy plants—still do a good job of dealing with them. Tender plants, not so much.

To better understand what’s going on in our gardens, it’s helpful to know that weather reports and forecasts measure and predict the temperature of the air a few feet off the ground, based on data from weather stations scattered throughout the country, along with satellite information and computer models.

Meanwhile, in reality, everything is colder just a few inches above soil level. That’s something to consider when debating whether to cover up those late fruiting tomato plants at night. If the forecast looks iffy, you should probably error on the side of caution.

You’ve probably also noticed micro-climates within your own garden. These are pockets where temperatures vary due to things like trees or shrubs or house walls collecting and retaining some warmth or sheltering from winds.

As you learn the sweet and cool spots in your own garden, you can use them to your advantage.

When soil freezes and, more specifically, when the water in soil freezes, shallow plant roots cannot take up water and nutrients.

This is normal for hardy plants as they go dormant for the winter but it’s also a reminder that newer plants should be in the ground weeks ahead of first frost to give those roots time to establish.

Many plants are approximately 90% water—it’s lower for trees—but most are in this range.

As mentioned, cold-hardy plants do a good job with their cell walls acting as ice barriers but any freezing within plant cells can be lethal.

Ice on the surface of the plant causes the plant’s cells to dehydrate as water is pulled to the exterior to join the crystals forming on the surface.

And this is where temperature swings are the real troublemakers.

It’s the repeated freeze-thaw-freeze-that cycles—the pulling of that water in and out of the plant during the active growing season—that may cause crystals to form within (sorry, plant).

We see this when a late cold spell wipes out the blossoms on fruit trees in spring, making fruiting impossible.

Cold-hardy plants usually get rid of their tender parts that will be damaged by the cold ahead of fall frosts and freezes, but tender plants not suited to your climate are sitting ducks.

This is also why rogue frosts in late spring or too early in fall can be so damaging: any actively growing plant parts are vulnerable to cell damage. 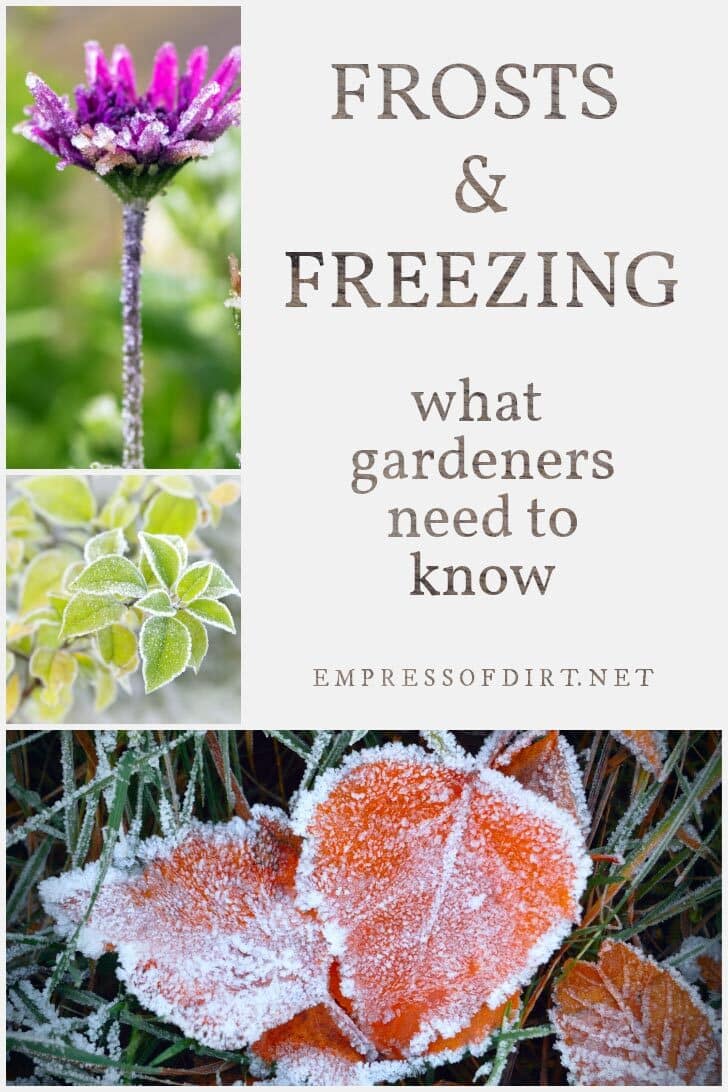