You can create your own worm castings to fertilize your garden plants using this homemade worm tower. It’s made from a bucket buried in the ground filled with leftover paper and food scraps suitable for composting worms. I’ll show you how it’s done.

If you are interested in other ways to make use of food waste, see Composting 101: Slow and Fast Methods.

What is a Worm Tower and Why Should I Have One?

I’ve been wanting to try a worm tower (worm town, worm bucket, worm palace, worm hotel) in my garden for a long time and I finally got around to adding one.

Much like home compost piles, a worm tower (in this case, a 5-gallon plastic bucket) offers another way to make use of food waste to create a beneficial soil amendment. There is plenty of research confirming that worm castings (the end product in this process) both improve soil and increases plant growth.

Worm castings are not the same as other compost: they have unique properties that make nitrogen, potassium, phosphorus, calcium and magnesium easier for plants to take up.

While regular compost piles heat up and cannot accommodate worms (they would fry), indoor and in-ground worm towers are kept at moderate temperatures and use red earthworms (‘composting worms’, not common earthworms) to convert food waste to castings.

I’ll walk you through some worm composting basics.

If you want to jump right to the instructions, click here: How to Make an In-Ground Worm Tower in a Bucket

The worms used in vermicomposting are not our common earthworms.

The earthworms we are all familiar with here in North America including  Lumbricus terrestris  are soil worms (anecic worms). They like to burrow deep in the soil, enjoy cooler conditions, and survive year-round.

These are shallow-dwelling worms that live in rich organic material (not deep in the soil) and do best in warmer—but not hot—temperatures (15-25 °C | 59-77 °F). That’s why you can’t use worms in a regular compost pile: it’s too hot! Worms also need darkness and die in prolonged sunlight.

While some red worms may be found here in the wild—horse manure can be a source—once temperatures dip below  50 °F |  10 °C, only the cocoons may survive our winters.

Where to Buy Worms

If you want to make a worm tower or indoor worm bin, you can order composting worms from a local red worm farmer (best option for vibrant, healthy worms) or get them on Amazon or other mail-order sources. Always check you are getting a composting red worm suitable for a worm bin.

To survive year-round they will have to be protected from temperature swings.

One smart idea would be to keep a large indoor worm bin in a Rubbermaid tub, and, as they reproduce, use your surplus worms to populate your outdoor bin.

Composting with worms is different than our usual outdoor compost piles or bins ( thermophyllic composting) which rely on heat to break down the organic matter (a combination of carbon-rich and nitrogen-rich items) into compost.

Worms cannot survive in these hot conditions and will exit from or die in any compost pile that is heating up.

With vermicomposting, we use bins or buckets kept at moderate temperatures (15-30 C / 50-85 F) to ensure the worms are content to stay where they are and convert our food scraps into ‘gardener’s gold’.

While this process could be done with food waste placed directly in the ground, using some sort of structure like a bucket will prevent moles, voles, rats, and mice from feeding on the edible contents. It also makes it easy to pull everything out of the ground for any maintenance needed.

Related: Tips for Using Animal Manures to Enrich Your Soil

Each container is decked out with plenty of  slightly damp ‘bedding’ and a modest amount of food scraps to mimic the natural habitat of composting worms. Everything you need to make a worm tower is listed below.

While the worms tend to get all the credit in vermicomposting, research indicates that microbes are equal partners in this process. The microbes feast on the food scraps and the red worms digest the microbe leftovers.  The worms then expel their waste or castings (poop) and this is what we use as garden fertilizer. So, hat-tip to microbes, the under-acknowledged heroes of the natural world! And, go worms, go!

How to Make an In-Ground Worm Tower in a Bucket

To make an outdoor worm tower, we drill a bunch of holes in the side and bottom of a food-grade plastic bucket and bury it in the ground.

The lip of the bucket is high enough above ground level to prevent excess rain from pouring into it.

Inside the bucket, we create an inviting worm habitat.

If you are using composting worms, the bucket will be filled almost entirely with slightly damp bedding material.

If you are hoping to attract soil worms, use a lot of composted animal manure.

The best location for a worm tower (bucket) is next to or within a veggie bed where (theoretically) the worms can travel in and out of the bucket and deposit their castings.

The only tool needed is an electric drill to put holes in the bucket.

(1) 5 gallon / 19L food grade plastic bucket with handle and lid.
Many big box stores have them for around $5.

Use a Food Grade Bucket Not PVC Pipe

When this idea first started popping up about a decade ago in permaculture gardens, some gardeners used pvc pipe to create worm towers.

But pvc pipe is not recommended for two reasons:

Another option is to use a Rubbermaid tub (just as you would use for composting worms indoors) or a plastic drum.

Whatever you choose, do some research first to find out what the item is made from and how it is rated.

You want most of your bucket to be filled with this stuff, so you’ll need lots. Once it is damp, it takes up much less space.

Everything should be pesticide (or other -cides) -free and finely chopped to help speed up the process.

Straw to keep temperature down and prevent flies in the container and insulate the exterior.

Composting worms, also called red worms. There are several species but worm farmers tend to grow just one or two.

Do a Google search to find a worm seller in your area. The words ‘composting worms’ or ‘red wigglers’ and your location should do the trick.

They are often sold by the pound and one pound is the maximum you would want in a standard 8 gallon / 30L Rubbermaid tote.

Some worm sellers offer pick-up and others also have mail-order.

You can also get them on Amazon but be sure they are a red worm species suitable for composting—not sickly worms used for bait.

It is important to get the tower / habitat ready first and allow a week for the microbes to start the party before adding your worms.

Use a 3/8-inch drill spade bit to drill holes in bottom and all around sides of bucket.
Remove or sand off any rough plastic bits.

Dig hole in garden nearly as deep as bucket is tall.
Allow the lip of the bucket to sit a few inches above ground level to prevent flooding.

Fill bucket with lots of bedding (see list above), just a handful of finely chopped food scraps, and a layer of straw on top.

Everything should be slightly moist. I find it easier to fill the bucket out of the ground and then lower it in when I’ve filled it.

Worm farmers say two mistakes newbies make are not using enough bedding and overfeeding the worms. So, go nuts with the bedding and start with a small amount of food (what fits in your hand is oodles).

My bucket will have extra manure because I am first checking to see if soil worms will be attracted to the bucket. If you’re using composting worms, you want a lighter, fluffier bedding and lots of it.

Place bucket in ground. Backfill soil all around the outer sides of the bucket for easy worm travelling. Secure lid.

If you are adding composting worms, wait a week for the bedding to settle and the microbes to congregate.

Your worms should be placed in the bucket on the bedding but below the top straw.

For mine, I am first testing to see if any common earthworms will find their way into the bin and/or whether the food scraps will decompose into good compost (or not).

It’s so different from hot composting, and I am not adding red worms yet, so I really don’t know what to expect. I could just end up with what I started with!

I do intend to add worms in the future though so stay tuned for more adventures in the worm palace.

If you start your own composter with red worms, I’d love to hear how it goes.

Related: Should I Use Compost Tea?

Soil | The foundation of your garden. Know what you’ve got and provide only what it needs.
• Mulch | Add 2-inches of organic matter to protect soil, retain moisture, and gradually fertilize your soil.
• Leaves | Finely chopped fall leaves make excellent mulch.
• Compost: Decomposed organic matter providing nutrients for the garden.
• Potting Mix | Contains no soil: designed to optimize plant growth in pots.
• Seed Starting Mix | A lightweight potting mix for sowing seeds in containers.
• Soil pH | Knowing your level (which may vary) is informational, not a call to action. Most soils fall in the range of 5 to 8 and accommodate a wide range of plants. 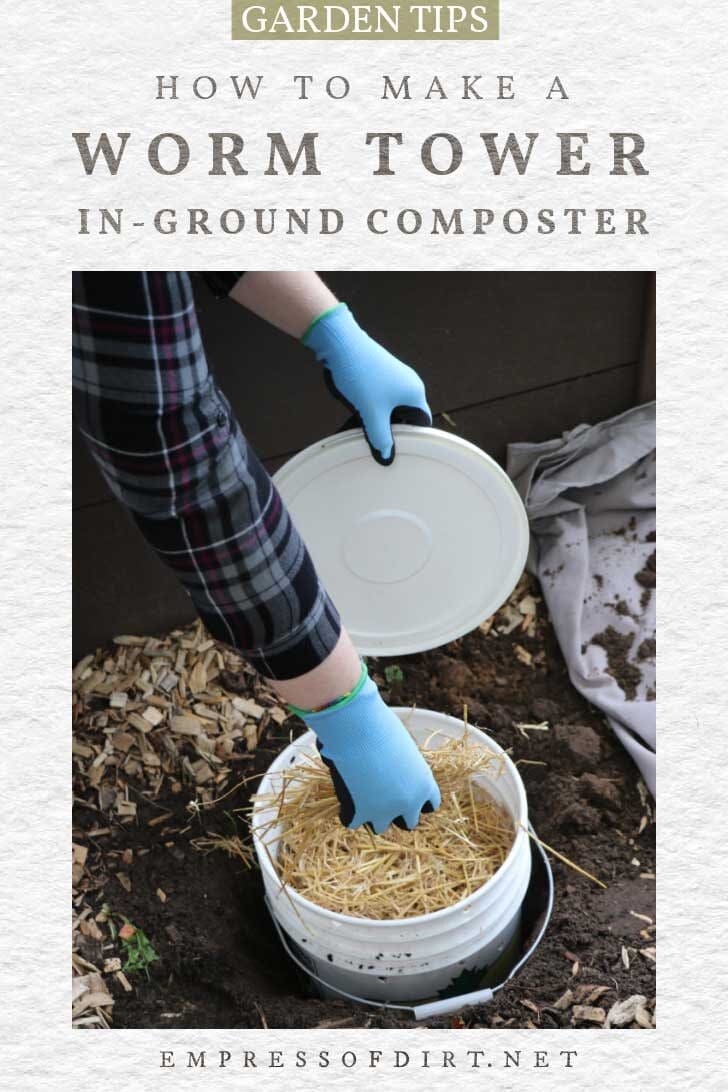