Beneficial nematodes are recommended as an alternative insecticide to treat problems like grub infestations in grass lawns. Let’s look at the pros and cons and see if they are a good fit for an eco-beneficial approach to gardening.

Curious about Bacillus thuringiensis (Bt)? Find out the Pros and Cons of Using Bt for Caterpillars (In Home Gardens).

If you’ve ever had problems with grubs eating up your lawn, you’ve probably had beneficial nematodes recommended as a biological control to combat them.

So what are nematodes?

Nematodes are the world’s most common animal. It is estimated that for every human on Earth there are 60 billion nematodes. Bacteria are the most common lifeform, but, within the animal kingdom, nematodes are number one.

While there are 20,000 named nematode species (and far more unnamed), the beneficial nematodes we’re discussing today are just a few specific species within the Steinernema and Heterorhabditis genera.

These are microscopic, worm-like, entomopathogenic microorganisms that kill mostly soil-dwelling insects at their larval or grub stage. They also go after fungus gnats and some other garden insects.

We call them “beneficial” because they can do what we want (kill grubs) unlike many others like the dreaded root-knot nematode that decimates vegetables (and other plants).

Beneficial nematodes are considered a safe alternative to other poisonous insecticide products but there are pros and cons as you’ll see below.

I’ve always left the grubs in my lawn for the resident skunks and racoons who dine on them each night but, after hearing beneficial nematodes so frequently suggested as a good, eco-friendly solution, I thought it was time to learn more.

This is a basic overview of how a nematode—whether one or many—kills a grub.

When infecting a grub, it’s not really the nematode but a specific bacteria that the nematode has ingested that does the job.

With few exceptions, each nematode species has one and only one species of bacteria it partners with. Think of the nematode as the bacteria delivery person who then reaps the reward.

After ingesting the bacteria, the nematode enters the grub through a natural opening such as the mouth or anus or digs a hole through the cuticle.

Once inside, the nematode deposits the bacteria through regurgitation or defecation. The grub, now infected, dies within days. While animals like skunks and birds prefer living grubs, others like nematodes want to devour that carcass.

Nematodes, like most other living things, also have predators but their bacteria partners serve a dual purpose and now fend off other bacteria and fungi that would like to join in.

With this added protection, the nematodes are free to eat and lay eggs.

One larvae can sustain two or three generations of nematodes over days or weeks until it’s time to find another food source.

With food running out, the current generation of nematodes needs to find a new host.

The ones that can live without a host while looking for a new one are called infective juveniles. The beneficial nematodes used a biological control for grubs are sold at this life stage.

If the product works as intended, you introduce infective juveniles to your lawn where they can find and infect grubs lurking in the soil.

The targeting of pests by nematodes is fairly broad, not specific. Different species and subspecies of nematodes work best with certain categories of grubs. Beneficial nematodes are often sold as mixtures of different species that will work against a much wider assortment of pests. They will also kill non-targeted insects that weren’t doing any harm and may even have helped reduce the number of pests.

Researchers consider the risk to populations of non-targeted organisms to be pretty low (some individuals will be killed, but population numbers will usually bounce back), but you cannot specifically target pest species and not kill anything else.

The species of nematodes deemed most effective against Japanese beetles, European chafers, and a few others is Heterorhabditis bacteriophora (Hb).

Beneficial nematodes sold at garden shops are not necessarily native species. They could be native or non-native (to your location) and produced locally or shipped from afar. Even if the species is native, the subspecies or strain that you buy may not be.

With greater awareness of invasive species issues these days, it’s legitimate to ask whether we should be concerned about introducing millions (or billions) of any (potentially) non-native animals to our soil.

At this point we do not have a lot of research on this.

Are beneficial nematodes safe for people or pets?

Beneficial nematodes are considered very safe to humans and pets as well as other mammals, birds, reptiles, amphibians, and aquatic life. You do not need to wear any protective gear or mask when you apply them.

In most countries they do not require any registration as pesticides and a lot of the usual regulations have been waived.

Are beneficial nematodes safe for bees?

Now, this was just one study —and done in a lab—so it may not happen in real-world conditions, or maybe not so readily.

We’re still learning about the effects on non-targeted insects, and while it looks pretty good, we can’t say there won’t be any unintended consequences.

The nematodes used to attack grubs do not harm plants. There are nematodes that are plant parasites, but they aren’t the ones sold as beneficial nematodes.

Some of the plant-destroying nematodes include root-knot nematodes (Meloidogyne spp.) that go after vegetable plants. Cyst nematodes (Heterodera and Globodera spp.) destroy soybeans, potatoes, and cereal plants. There are also root lesion nematodes (Pratylenchus spp.) and so many more! But the nematodes sold as beneficial nematodes are different species, so you don’t have to worry about them damaging your plants.

It’s entirely possible, however, to inadvertently introduce “bad” nematodes into the garden through potted plants or soil amendments.

When you read the product instructions for applying beneficial nematodes, you realize what a delicate operation this is.

Very generally, the nematodes are added to water and sprayed onto the lawn where they will be absorbed into the soil.

One application may cost anywhere from $15 to $50 depending on the nematode species and brand.

A typical dose is 5 million nematodes, covering up to 2000 square feet. Obviously, there’s no practical way to verify the quantity or confirm they are indeed living.

Upon application, most nematodes will die before they ever find a host, and the rest gradually decline over the next few weeks.

If it works as intended, some—not all—grubs will die. Although we’ll never really know if the nematodes or something else deserves credit.

It’s quite a juggling act both buy the nematodes and apply them when conditions are right, but these tips should help.

You need the right species for the insect you are targeting and the nematodes must be stored under the right conditions.

Beneficial nematodes are aquatic animals that live in the water in soil. They cannot withstand temperature extremes or light.

You can buy nematode mixes (variety packs) with different nematodes to cover a broader range of pests, although sellers rarely break down each nematode by percent so you don’t know what you’re getting.

A trusted source should be able to tell you exactly what species you are buying, what it targets and what to expect. They should insist on proper storage and immediate use—at the right time of day and the right time of year.

The nematodes are packaged with a sponge, gel, or some other granular medium like vermiculite.

Garden nurseries should have them in a fridge and you may need a cool pack to transport them home.

Beneficial nematodes can only kill some insects in certain stages of that insect’s lifecycle under certain conditions. That’s a lot of variables to watch out for!

For grubs, that usually means spring or fall is the right time. Fall applications are most often recommended because the grubs are more vulnerable.

The application also requires the right soil temperature for that nematode species.

Plus, the soil should be moist but not super-saturated or the nematodes will wash away.

Soil texture can also affect the outcome although there’s not much you can do about that.

How To Know It Worked

It’s tricky with something like this because the grubs are out of sight and the nematodes are invisible. You know you have brown patches on your lawn that look like grubs have been eating the grass roots, but it’s not like we can do a head count before and after.

A few weeks after applying beneficial nematodes you may notice some improvement. You’ll have to decide if the nematodes get credit or something else (like a hungry skunk) did the job instead.

If the lawn does not improve, the nematodes likely died at some stage in the process—before purchase, during transport, or after application without ever reaching the grubs. Or, they affected few of many.

If a larvae is infected with Heterorhabditis bacteriophora (Hb)—the type of nematode most effective for Japanese Beetles—the grub will turn from fleshy white to dry and brown (during the stage when the nematodes are still feasting on it). If you’re curious, you could dig up some turf and look for this, although that might defeat the purpose of the application, assuming you’re trying for a better-looking lawn.

Without standards or regulations, there is no guarantee the product information is accurate.

Some researchers have complained that companies selling beneficial nematodes go beyond the research when making claims about which nematodes work with which pests. One listing on Amazon.com lists 109 pests and ends with “and more!” That would require quite a robust selection of nematodes, each in substantial volumes, to indeed be effective.

Plus, we have to consider that what has worked in lab tests may not work anywhere else.

One group of researchers wrote a few years ago that “many insects listed on the product labels of certain commercial companies are improper targets for nematodes” and they gave eight examples, including cucumber beetles, flea beetles, carrot weevil, and root maggots. [see PDF file]

You can find nematodes being sold today from leading companies claiming that they control those pests. Maybe they can in some situations but the researchers didn’t seem to think so.

At some point you just have to go with the best information you have and make a decision.

If you do want to use them, buy from a trusted source that has experience in collecting the right nematodes and storing and shipping them as safely as possible. And then use them as soon as possible according to the product instructions. 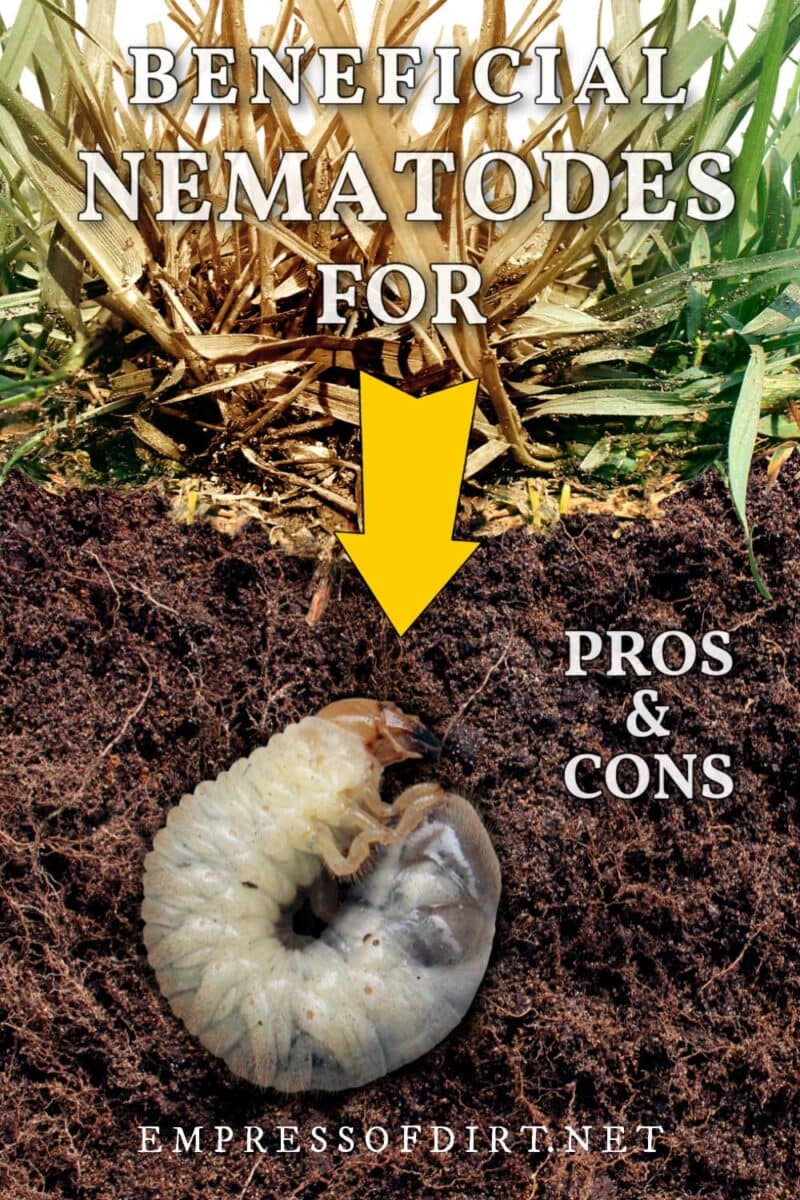