Bacillus thuringiensis (Bt) is recommended as a safe, organic, and harmless insecticide to kill caterpillars but it’s not that simple. If you have an eco-beneficial garden, there are plenty of things to consider first.

Related to this, this explains ways the word “organic” is frequently misused and misunderstood in gardening.

Should I Use Bacillus thuringiensis (Bt)?

When considering using Bt, specifically Bacillus thuringiensis kurstatki (Btk), as a caterpillar control in the home garden, there are important things know first.

It’s heralded as “safe, organic, and harmless” but it’s not that simple, especially if you are trying to garden in eco-beneficial way.

First, we need caterpillars! Yes, a select group of invasive species can prove problematic, but that is no excuse for how we’ve been taught to hate all of them. Caterpillars are important members of the eco-system.

If they survive the larval stage, they become moths and butterflies (Lepidoptera)—not only important (and much loved) pollinators but another food source for other animals. And most—by far—are not causing any significant harm.

Second, products that include Btk, like Thurcide BT Caterpillar Control, will kill moth or butterfly larvae as promised but not just the “bad” guys. The product labels sometimes say “non-toxic to beneficial insects” but this is just not so. Btk can kill any caterpillars who ingest it—which means any type of moth or butterfly is vulnerable.

Yes, Btk is a big improvement over other broad-spectrum insecticides that poison on contact, but it should still be used with caution—if at all. We’re starting to see resistance from overuse in agricultural settings. And, in treating the “bad” guys you may also kill some “good” guys too—something that is hard to justify in our home gardens.

Why Caterpillars Are Important

Moths and butterflies belong to the Lepidoptera order. They lay their eggs on plants. Some can only use specific plants. Those eggs become caterpillars which live off those same plants. A caterpillar noshing on leaves is fattening up for the next stage—forming a chrysalis or cocoon which will eventually become a new butterfly or moth.

Historically, we have be taught to love the butterfly but despise the caterpillar—upset to see how they can devour leaves on our garden plants.

But here’s the kicker: that’s their sustenance. These creatures have co-evolved with plants—sometimes specific plants—and cannot survive without them. They do not have other options: they have to eat their host plants and without them, they cannot exist.

We put so much emphasis on growing plants rich in nectar and pollen to attract butterflies, bees, and other pollinators, but overlook how equally important their herbaceous larval host plants are.

All moths and butterflies need somewhere to lay their eggs.

The eastern black swallowtail (Papilio polyxenses) needs plants like dill, parsley, and carrots (Apiaceae family). These are things we grow to eat—and we may resent seeing them being chewed up in the garden—but their larvae need them too.

If we poison or kill caterpillars there is a domino effect. Caterpillars are at the bottom of the food chain and provide a vital source of protein for countless birds, bugs, frogs, toads, bats, and other insectivorous animals.

It is estimated that baby birds in the nest will consume thousands of caterpillars in the few weeks it takes to go from hatching to fledging.

Multiply that times the number of birds living in and around your garden and that’s a huge demand for caterpillars!

Meanwhile, we fixate on this creature noshing on our plants and worry that they are destroying our gardens.

But they are just doing what they need to do to survive.

This doesn’t mean we have to give all caterpillars free rein. But it does mean taking more care to properly identify the species first, understand what it’s doing, and then weigh our options.

It’s helpful to know how Bt works to decide whether it’s something you’d want to use.

Bacillus thuringiensis is a bacterium found in soil and other places. There are various Bt products containing different strains that kill different animals.

The strain that targets Lepidoptera (moths and butterflies) is Bacillus thuringiensis kurstaki (Btk). It was discovered in the early 1900s and first appeared on the market in the 1970s, sold as caterpillar killer or for caterpillar control. Because it only works during the larval stage, you have to follow the directions precisely, timing it just right, and apply the spray to the leaves only.

Any caterpillars that come along may be fodder, whether it’s a fall webworm (Hyphantria cunea) or a mourning cloak (Nymphalis antiopa) or something else.

How Bacillus thuringiensis kurstaki (Btk) kills caterpillars is both intriguing and gory.

The active ingredient is not the bacteria itself. The bacteria produce spores and it’s the crystalline proteins just outside the spores that do the job.

The spores can survive for years in the soil but when you spray them on plants and they are exposed to sun, they degrade quickly and are short-lived.

While inconvenient, overall this is good because it means it’s less likely to build up in the environment as happens with so many other pesticides. The downside is you may have to reapply it after a few days.

In spray form, it’s easy to apply to the underside of leaves where the caterpillars are found.

This next part is dramatic.

Once the Btk is applied, the caterpillar consumes the proteins along with the host plant.

Two things are needed for the toxins to take effect: an alkaline gut environment and specific gut receptors.

With those two things available, the toxins bind to the caterpillar’s gut.

The toxins start breaking down the stomach cells, holes form, and the contents of the stomach gradually leak out. Sepsis may occur.

When first applied it may not seem to be working but soon the caterpillar will stop eating and die a few days later.

In addition to Btk for caterpillar control, there are other strains of Bt that target other animals.

Bacillus thuringiensis israelensis (Bti) targets mosquitoes, midges, and blackflies as well as others in the Diptera order. Like Btk, it is also only effective during the larval stage.

Bacillus thuringiensis galleriae (Btg) is a newer discovery and targets insects in the Coleoptera order including Japanese beetles (Popillia japonica)—an introduced species that has been destructively munching its way across North America for the past 100 years.

What To Ask First

Garden decisions get easier when you consider the big picture first.

The food web is complex and fantastic: plants and animals are all inter-dependent.

Our job is to protect and nurture these ecosystems.

Something like spraying pesky caterpillars seems trivial until you consider their role in this food web and multiply the use of insecticides by millions of gardeners doing the same thing. And to what end?

Is this caterpillar really a problem? Is the damage really significant and at what cost?

Btk can kill all moth and butterfly caterpillars, not just “bad” ones, so proper identification is important. You need to be certain about what you’re killing and why, and do it precisely, following the product instructions—if it is truly warranted.

With over 180,000 described species—and many more yet to be identified, you are forgiven for not recognizing your Lepidoptera larvae! Plus there are lookalikes from other insect orders.

But that munching caterpillar comes with clues that may help narrow down its identity.

2) What the damage looks like.
Some caterpillars munch like Pac-Man. Others can skeletonize the leaves. What are they doing to your plants? The bite patterns provide additional clues.

3) What the caterpillar looks like.
It’s all in the details! Note the color, body pattern, hair density, and distinct features like a tail—some have split tails, horns, knobs, prolegs (that help anchor the body), lashes, and spines.

There are various caterpillars that live on brassicas (cabbage, broccoli, kale) but there are distinctions between them.

The infamous and oh-so-persistent imported cabbage worm or cabbage white (Pieris rapae), a caterpillar not a worm, is green and velvety—similar to some others—but, if you look closely, there’s a fine, light-yellow stripe along its back. That’s how I know I’ve got them.

Once identified, I wait.

Yes, leaves are being eaten but it’s often just a matter of time before the predators also show up.

If the numbers are high, I may physically remove them (hand-pick) and place them on the bird feeder.

For the next growing season, I can help prevent the problem by placing floating row covers over the plants early on before the moths and butterflies can lay their eggs there. If they are fluttering about in early spring, assume they are laying! Row covers are not perfect but they sure help.

For something like eastern tent caterpillars (in the Lasiocampidae family), as gross as they look in the trees, I see the birds and bats eating them, which makes me reluctant to do anything. And the trees are still doing fine despite them.

You’ve got to take it on a case-by-case basis and ask, what’s the worst thing that can happen if I just let them be? Or, can I reduce the damage without causing other harm? Or, should I be putting my efforts into other things?

Knowing how important a poison-free ecosystem is, along with a diverse selection of (regionally-appropriate) plants, I’d rather use my garden budget to improve the soil and buy useful plants than deal with pest products, even the lesser of evils, Btk.

I’ve been gardening for decades now and I’ve yet to find an instance where I felt justified as a home gardener to use any insecticides. Full stop.

Perhaps it will be the same for you. Or, if not, first know what you’re targeting and why.

Bringing Nature Home: How You Can Sustain Wildlife with Native Plants | Doug Tallamy

Garden Allies: The Insects, Birds, & Other Animals that Keep Your Garden Beautiful and Thriving | Frederique Lavoipierre

The Humane Gardener: Nurturing a Backyard Habitat for Wildlife (How to Create a Sustainable and Ethical Garden that Promotes Native Wildlife, Plants, and Biodiversity) | Nancy Lawson 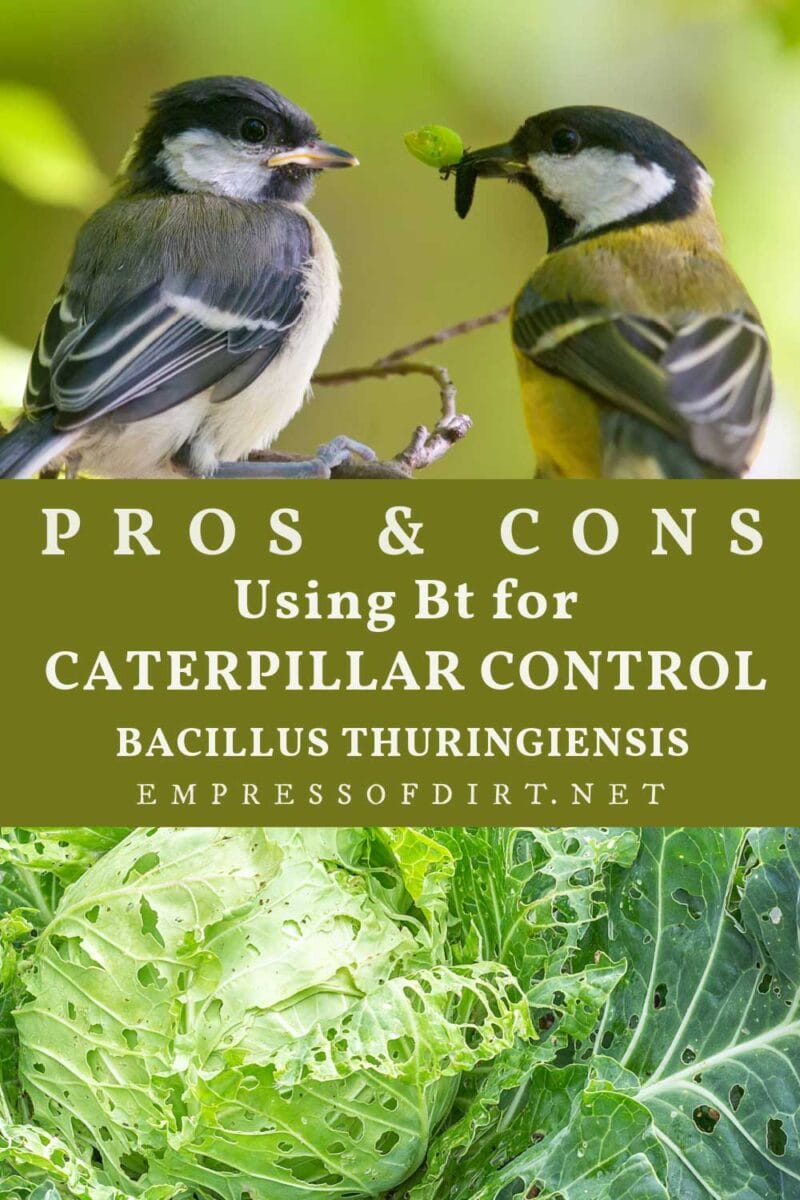