Fungus gnats are tiny flying insects that resemble mosquitoes and lay eggs in potting soil. If you find them around your houseplants there are several things you can do both to stop them and prevent future outbreaks.

Because fungus gnats need moist conditions to thrive, learning to water your houseplants according to their changing needs, not a fixed routine, is good prevention.

The Trouble With Fungus Gnats

If you grow potted plants indoors or start a lot of plants from seed in your home, at some point you will probably notice fungus gnats flitting about, either around your plants or a nearby light source. Just by watering your soil, you may send a cluster of them flying!

But what are they and will they do harm?

Fungus gnat (pronounced ‘nat’) is the general name for a whole group of species—tiny insects—that like to feed off fungi, decaying matter, and other microorganisms found in soil or potting mix. They are highly attracted to moist growing conditions.

We tend to notice these tiny mosquito-like insects in our homes during their adult phase but it’s their larvae (newly hatched eggs) that can cause problems.

Let’s look at how to identify fungus gnats, their life cycle—which provides clues on how to stop them—plus some prevention tips and solutions.

If you’ve just discovered fungus gnats around your houseplants and have concerns, rest assured that in most instances they are annoying but do little or no harm.

What Are Fungus Gnats?

Fungus gnat is a broad term that refers to thousands of species within dozens of genera belonging to the Diptera order (flies). The Sciaridae family of flies (dark-winged fungus gnats) are one example.

Outdoors in the natural world, fungus gnats do a lot of good, decomposing organic matter and helping cycle nutrients. Plus they are both pollinators and act as a food source for other wildlife including birds. With plenty of natural predators available, they are kept in check.

Without these checks and balances indoors, the gnats are free to lay their eggs unfettered.

Depending on the numbers, we may simply be annoyed by these little insects flying around our plants, or, if an outbreak is significant and lots of larvae are present, plant root damage may occur.

To deal with fungus gnats, the first step is to confirm that’s what you have and then follow the tips below to both discourage and stop them.

Fungus gnats look like little mosquitoes but unlike mosquitoes they do not bite people or animals.

While there are other flies that fit the fungus gnat description, a tell-tale sign is how the adults move, appearing to hop fairly short distances (a few inches) in a disorderly fashion, rather than flying more proficiently.

Fungus gnat larvae (maggots) have translucent bodies and shiny black heads. They measure about 1/4-inch long (6.3 mm) or twice the length of the adults.

If you’re pretty sure you have fungus gnat larvae but can’t find them by combing through your potting mix, you can try the potato trick to attract them.

Place a 1/4-inch slice of raw potato on the potting mix. Any nearby larvae should come dine on the underside of the potato slice within a few days.

Life Cycle & How They Damage Plants

Fungus gnats develop through complete metamorphosis in four stages over a period of approximately three weeks in warmer conditions (65° to 75°F | 18° to 24°C) and up to six weeks in cooler conditions:

The adult cycle, when the fungus gnats are flying (or hopping), only lasts about a week. It’s during this time that the female lays eggs in the soil—sometimes well over a hundred eggs at a time.

After hatching, the larvae stage lasts about two weeks.

To survive, the larvae must eat and that may include feeding off your plant roots and root hairs within the soil or the stems of seedlings.

If there is enough damage, you may notice your plant is wilting or dropping leaves despite proper care.

The other concern is that both the adults and larvae can also transmit diseases (pathogens) such as pythium which causes damping-off disease.

How to Prevent Fungus Gnats

Fungus gnats are very common in greenhouses and nurseries, so wherever you buy a plant there’s a chance they are hiding in the soil.

You can also bring them in from outside, perhaps when overwintering plants, or in bags of soil or potting mix.

The tips for preventing or discouraging fungus gnats are similar to those for preventing fungal diseases in general and all part of basic, proper plant care.

At home, the usual smart practices can help:

This has excellent tips for learning how to water houseplants effectively without over- or under-watering.

How To Get Rid of Fungus Gnats

If you do get fungus gnats, there are several things you can try to either get rid of them or at least reduce their numbers.

Some of these tips have been studied and others have not, so in some cases we have to rely on what other gardeners have reported. Anecdotal evidence always deserves scrutiny but sometimes it’s all we have.

None of these solutions are targeted solely to fungus gnats so keep in mind that anything you do may affect other living things as well.

These yellow sticky traps available at Amazon are sold under various names including Gnat Stix. They are yellow pieces of cardstock or plastic with a sticky coating. The color attracts the adult fungus gnats who fly into it and stick in place. Any other flying insects that come in contact will stick as well.

These traps should be placed under the plant canopy (below the leaves) or around the inner perimeter of the pot.

Gnat Stix and other yellow sticky traps generally last 4-6 weeks unless they fill up with gnats sooner.

Using these cards will not stop any larvae currently eating your plant roots but it can prevent some adult females from laying their eggs, which will reduce the number of future generations.

The use of nematodes can be unreliable for a bunch of reasons (see The Problem With Buying Beneficial Nematodes) but there are specific nematodes that do attack fungus gnat larvae.

If you want to try, you will need Steinerema feltiae nematodes and ensure you have the right conditions for them to work. Your seller should have specific instructions.

The type of Bt that can stop fungus gnats is Bacillus thuringiensis israelensis (Bti), the same one used to stop mosquito larvae.

You may see it sold as MosquitoDunks or MosquitoBits although any Bti product should be effective.

We have an article here explaining different types of Bt and how they work. Be sure to also read the product information carefully.

By covering your potting mix with sand you can deter the female adult fungus gnat from laying her eggs there.

The studies we have don’t show great results since you only need a tiny gap in the sand to accommodate this tiny insect.

So, if you’re going to try it, be sure to cover the growing media thoroughly.

Plus, if we’re deterring the gnat from laying in one pot, she will likely just lay her eggs in the next best place she can find, which may or may not be sufficient for the larvae to survive.

This is another one where some people swear by it but the experimental results were not good. You can read all about DE and how it works here. It’s touted as harmless and organic but there are potential risks for humans and pets.

If other efforts have not worked, and the outbreak is persistent, you may want to repot your plants with fresh potting mix.

Depending on size and quantity, it could be a big job, and a last resort.

One strategy is to completely clean everything.

There are lots of other suggestions you’ll see and very few have ever been studied or put to a rigorous test, so it’s mostly just “it worked for me” stories.

One you can ignore is vinegar or apple cider vinegar traps. These work for catching fruit flies (Drosophila melanogaster) not fungus gnats. So, if you have fungus gnats, don’t bother. They won’t fall for it!

What about the advice to use soaps or oils?

According to Colorado State University Extension, “short-persisting contact insecticides such as those containing pyrethrins, soaps, oils, and neem, do not provide sufficient long-term control of fungus gnat adults and require repeat applications at short intervals (couple of days) to exhibit effects.” The article has more information if this interests you.

The use of hydrogen peroxide (H2O2) to treat fungus gnats requires further research. We have not found any research indicating it’s an effective option. The studies available involving hydrogen peroxide are not specific to gnats on houseplants but instead focus on different issues in commercial facilities.

This should give you lots of options to say farewell to fungus gnats. 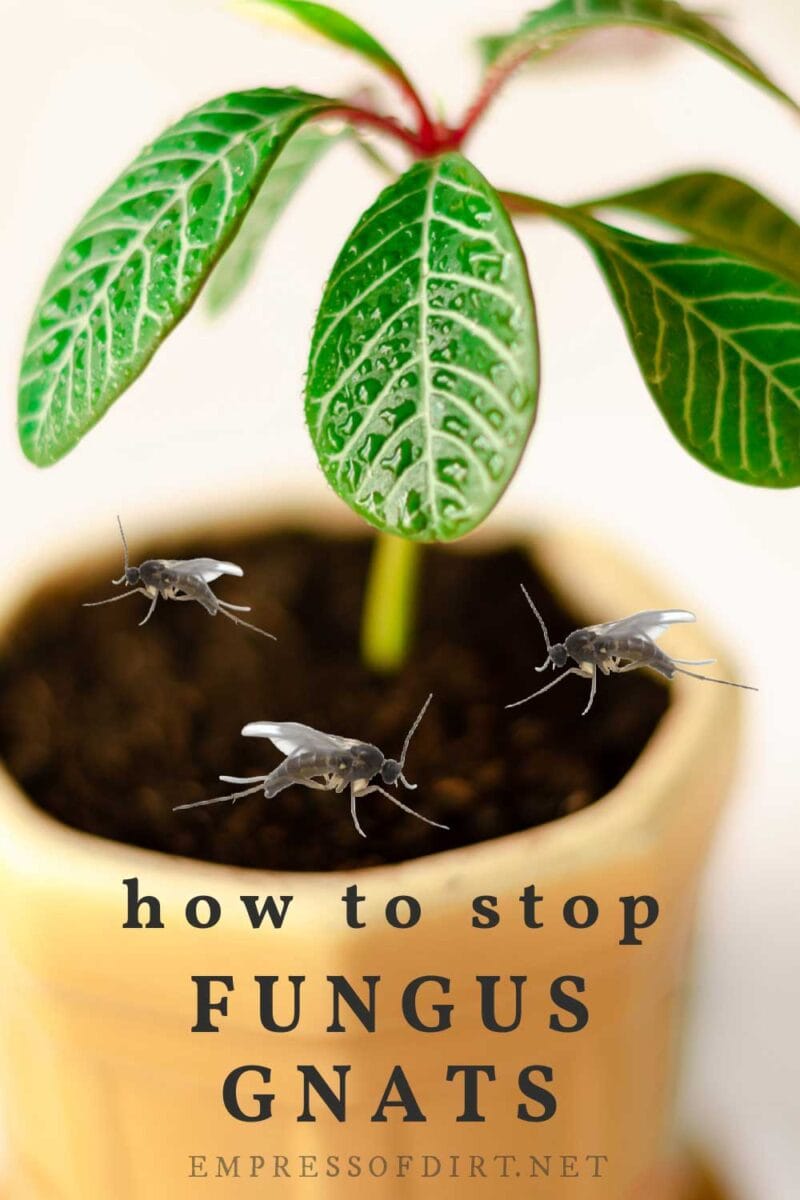