While there is no way to completely get rid of Japanese beetles, these tips can help us catch more of them. The fewer we have, the fewer there are to destroy our plants.

If weeds are winning in your garden, these smart weeding tips make it much easier to remove them.

If you have a garden in the eastern United States or Canada, you probably know the destructive ways of the Japanese beetle (Popillia japonica).

Over the past 100 years, they have been gradually eating and mating their way across the continent, with no sign of letting up.

Since originally writing this article in 2017, Japanese beetles have rapidly spread across North America and far more gardeners have experience their destructive ways.

With an appetite for over 300 species of plants, it is nearly impossible to create a garden devoid of plants they find enticing. They dine on both blossoms and foliage, and, if enough of them gather in one spot, they can devour the leaves of entire Linden trees in less than 24 hours.

They are a bit awkward in flight, clumsy when standing, but, jeepers these guys are trouble.

Invasive Species With No Natural Predators

Often in their native habitat, there are natural controls to keep populations in check (the might food chain).

Here in North America, there are just a few known insect parasites and predators to attack them.

There are some mentions online of attempts to introduce predators to control them. This always makes me nervous as plans to outsmart nature can be the start of the next invasive species problem.

We also know they are temporarily paralyzed after contact with a zonal geranium solution, so this may offer some sort of future remedy.

The damage Japanese beetles do is not the same each year.

If the main mating and egg-laying months are too dry, populations decrease the following year, as larvae dry up in the soil.

A rainy summer means they’ll get us back the following year.

I have listed my resources for this article at the bottom if you would like to read more about these annoying pests. 🙂

Click play to watch how I manually remove the beetles:

Current treatments for catching and/or killing Japanese beetles have modest results when compared to their numbers at large.

Japanese beetle traps disperse specific pheromones attractive to the beetles. The design invites them in but makes exiting difficult.

Reviews are mixed though, arguably, it is difficult to measure or A/B test.

Cheeky gardeners suggest the best place for a trap is in your neighbor’s yard. The idea being that the trap will attract the beetles away from your garden. Not a bad theory!

Insecticides can work, but, as far as I can determine, there are not any at this time that specifically target the Japanese beetle without causing collateral damage to other living things in the vicinity.

If it’s something you wish to pursue, Google will have to be your friend because I stick to gardening organically, and would rather have these beetles than risk poisoning other beneficial or important things (plants, insects, microbes…) in the circle of life.

As these beetles spread into new regions, it is hoped that local wildlife will take notice and start eating them to help reduce their numbers. Recently I saw reports of chipmunks eating them—hopefully that bodes well for the chipmunks!

This leaves us with the option of hand-picking or using a dedicated, battery-operated hand vacuum to manually remove the beetles.

Japanese beetles are quite odd. They are clumsy fliers at best and do not move around very easily.

You will notice if you touch them, they often flop on their backs and appear helpless, like an upside-down turtle.

This causes a problem during hand-picking: often with the slightest touch, they fall to the ground, disappearing once again into the garden.

To combat this, I do two things.

When you see a Japanese beetle on a plant, place the cup directly below them and use your taped fingers to push them into the cup.

Either they fall into the soapy water or they stick to the tape. Either way you’ve got them. If they’re on the tape, just tap the edge of the cup until they fall off.

It’s super simple but this has increased my catch rate to nearly 100%. There will always be more out there, but catching does help.

You can see a demonstration in the video (above).

The other precaution is to avoid crushing them. I haven’t found research to confirm this for certain, but it seems that because these insects are attracted by scents (pheromones), you don’t want to crush your captive ones and risk emitting additional scent that may attract others to your garden.

These are some of the 300+ plants that Japanese beetles will dine on.

You may notice in your own garden that the beetles congregate on certain plants and leave other alone. It’s impossible to tell what they will prefer year-after-year which makes it nearly impossible to change up plants to discourage them.

This is a short list of plants they will eat although I’m guessing the expression “any port in a storm” may be relevant here.

Make cool stuff with natural materials from and for your garden. 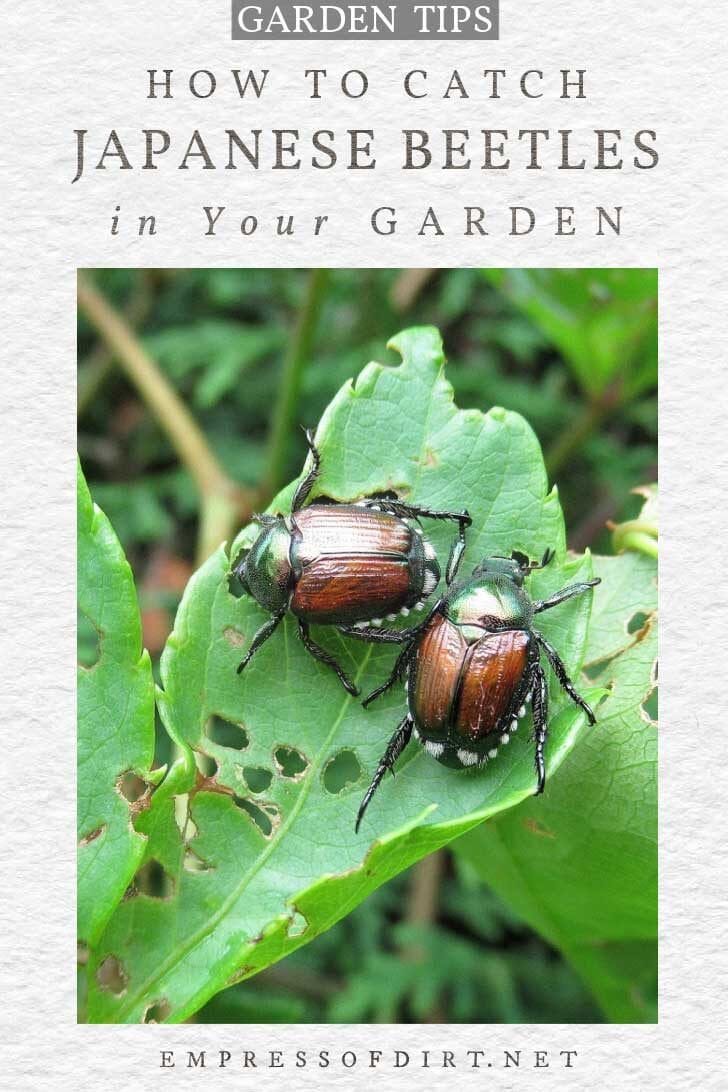