Use these tips to grow hollyhocks in your garden and find out which varieties offer some rust-resistance. These old-fashioned flowers have been popular for generations.

Delphiniums are another favorite tall flower: see How to Grow Delphiniums for tips.

Growing Hollyhocks and Dealing With Rust

What is hollyhock rust?

The common name hollyhock is used for over 60 species in the mallow (Malvaceae) family. The ones we’re talking about here are cultivars of Alcea rosea: those tall, gorgeous cottage-style flowers, often with leaves like fig trees, providing an array of gorgeous pastel and bold colors, known for reseeding year after year.

You can grow hollyhocks from starter plants purchased from a nursery or from seed. Depending on the type you’re growing, you may need to start the seeds indoors before last frost to allow enough time to fully enjoy the flowers during your frost-free summer days.

Most hollyhocks are suited to hardiness zones 3 to 9. They like full-sun (at least 6 total hours of direct sun per day) and well-draining soil. An ideal location offers wind protection, no splashing water from nearby roof tops, and the plants spread out to allow good air circulation.

When do hollyhocks bloom?

If situated in full sun, hollyhocks bloom in summer for a number of weeks. In cold climate gardens in Canada and the United States they flower from June to August, depending on the variety. Blooming can be delayed in shade or part-shade locations.

How are hollyhocks pollinated?

Bees, butterflies, and hummingbirds will all visit and pollinate hollyhocks.

Do hollyhocks come back each year?

While they are often deemed biennials (stems the first year, flowers in second year), some hollyhocks (Alcea rosa) are annual (full life cycle in one season) and others are “short-lived” perennials. This explains more about annual, biennial, and perennial plants.

The rust-resistant varieties recommended below are all perennial.

Traditionally, hollyhocks are left to go to seed, allowing them to multiply by self-seeding year after year. You may not wish to do this if the location is infected with hollyhock rust.

It’s impossible to talk about hollyhocks (and all of the plants in this family) without addressing the rust issue. Rust is a fungal disease and hollyhock rust only occurs in plants in this group.

The tips below share best practices for growing hollyhocks to help prevent or lessen any occurrence of rust. It cannot be eliminated because it’s present all over the planet, but there are a few practical things we can do, including growing rust-resistant varieties, to offset this.

If you love hollyhocks like I do, it’s worth a try.

6 Tips for Growing Hollyhocks and Dealing With Rust

What are some rust-resistant hollyhocks to grow?

Some hollyhock seeds seem to resist rust fungi infections better than others so these are a good start.

Look for these two species:

TIP: If you are buying starter plants, inspect them closely for any sign of spotting or spores. If you see signs of disease, do not buy from that source.

“The most rust-resistant Hollyhock around!”

2Grow in a Dry Location with Good Air Flow

How can I help prevent the spread of hollyhock rust?

You may notice hollyhocks growing rust-free in unusual places. I took the photo (above) in a laneway in a small town. Often it’s a sheltered location with good drainage, perhaps even somewhat drought conditions. That’s ideal for the plant and unfavorable for the fungus spores that need moisture to germinate.

Because of their height, hollyhocks look great at the back of a border or along a wall, but avoid sowing hear houses or sheds where they could be exposed to rain running off the roof or splashing.

Growing in containers is also an option, allowing us to move the plants as needed.

It’s tradition to let hollyhocks self-seed and grow in clusters but spacing the plants a few feet apart can also greatly reduce the spread of rust.

TIP: If you get some self-seeders, transplant them to pots, grow them to about 8-inches tall, and then transplant them back to the garden or a large container. They seem to do better with this extra care instead of transplanting directly.

3Water the Roots Not the Leaves

What is the best way to water hollyhocks?

The rain will do what rain does and that’s not within our control, but, if you are hand-watering your hollyhocks, aim for the soil only (no splashing), and leave the plant dry.

It can also help to water earlier in the day to allow the midday sun to evaporate any excess water.

What should I do if I find hollyhock rust?

Rust is catch-all term for fungal diseases that affect various plants. Different rust species affect different plant families. The two most common hollyhock fungi are Puccinia malvacearum and P. heterogenea. There are several others as well. It can be hard to tell them apart but I’m not sure that matters.

You can read more about hollyhock rusts here.

Rust usually appears on the lower leaves first, spreading upward. These are teliospores that embed within the leaf. The underside may reveal pustules (yellow, orange, brown, purple, or black, depending on the timing) that gradually break down the foliage. When the infestation takes over, it disfigures the plant, and it’s time to pull the plug.

If you do see those dreaded rust spots, act immediately.

For a few rust spots, remove the infected leaves.

If it’s really bad and you have other plants that could get infected, cut the plant down to just above the ground or remove it entirely. I’ve listed suggestions for disposal below.

I know gardeners (super hollyhock fans) who manage the situation by keeping the least infected plants and removing the rest. Sometimes leaf removal is enough to slow the rust long enough to enjoy the flowers and get seeds.

While the embryo of hollyhock seed has not been shown to carry the fungus, the flower parts where the seed grows might.

For this reason it’s often advised not to save seeds from infected plants. You can decide this one for yourself.

Hollyhock rusts are not a threat to other plants outside the Malvaceae family, so do not worry about that. There are plenty of other specialty rusts to wreak havoc on roses, Pelargoniums, chrysanthemums and more!

What Should I Do With the Rust-Infected Plants?

‘Rapid composting’ is often recommended. This means placing the plants in a hot compost pile where the high heat will break them down and kill the spores. A cold compost pile will likely just keep the spores dormant until you stir them up.

I could not find research stating the temperature that kills the spores but 145F tends to be the minimum for other microbials.

Some advice says to bury the infected plant matter in other leaves, letting the good microbes and beneficial fungi spores take over.

Others suggest burning the diseased matter if permitted (or desirable) where you live.

Which other plants can be affected by hollyhock rust?

It’s not always realistic (or desirable) to remove vulnerable plants but it is something to consider. (Do as I say, not as I do!)

Puccinia malvacearum can infect all members of Malvaceae family. If an outbreak is really severe, in addition to cutting back or removing your hollyhocks, consider removing other plants in the same family (including weeds). I’ve listed a few here:

If it’s really bad, stop growing them, give it a few years (or more) and try again.

6Cut Hollyhocks Down the Ground in Fall

What should I do with hollyhocks in fall?

If your plants made it through the growing season without rust: congratulations! You are a unicorn.

If there was some rust, cut the stalks down to the ground and dispose of the diseased material.

Otherwise those fungal spores stay dormant in the winter, ready to pounce again in spring.

My hollyhock is not flowering. What is wrong?

Hollyhocks need full sun to flower. Are yours getting at least six hours of direct sun each day?

Another common cause is too much fertilizer, specifically nitrogen (the N in N-P-K on fertilizer labels). Depending on how far along you are in the season, you may not be able to get blooms this year. But stop fertilizing, regardless.

There is also a fungus, Botrytis, a gray mould, that infects flowers and buds that could be to blame.

Can I remove hollyhock rust with fungicides?

No. There are two issues with this.

First, a non-specific fungicide (a product that kills fungi), stops any spores it encounters from germinating. Most of the fungi in our gardens are harmless and this is not beneficial. Plus, fungicides harm a broad range of organisms including pollinators.

Second, it’s not realistic to think we can get rid of all the spores. They’re everywhere and they can travel great distances by wind from other gardens. Once they’re here, the horse is out of the barn.

Some gardeners try fungicides preventatively to (they hope) slow an outbreak, but, the consensus is, it’s a losing battle. You can treat the plant and the soil at its roots, but are you going to also get every spore in your garden and your neighbors’ gardens? And is it worth it knowing how it affects all fungi—even the good stuff?

If I save seeds from a rust-infected hollyhock, will the new plants have rust?

As far as we know, the seed embryos do not carry rust but the plant parts surrounding the seed might.

For this reason, it is not recommended to save the seeds from infected plants.
It’s one tiny preventative step in a spore-filled world.

You may also want to read up on the surface sterilization of seeds using a bleach solution in case that’s something you want to try.

What are some pests and diseases that affect hollyhocks besides rust fungus?

Start with rust-resistant hollyhock seeds. These are not pre-treated seeds but breeds that can be less prone to rust.

Keep in mind, though, that the same seeds growing in a warmer, dry, low-humidity garden in one region may go rust-free while succumbing to rust in a cooler, damper area. No fair!

We’re never going to be able to control or avoid hollyhock rust entirely, but with the tips listed above, you may be able to grow these gorgeous flowers with minimal or manageable amounts of rust.

I’m certainly going to give it another try. 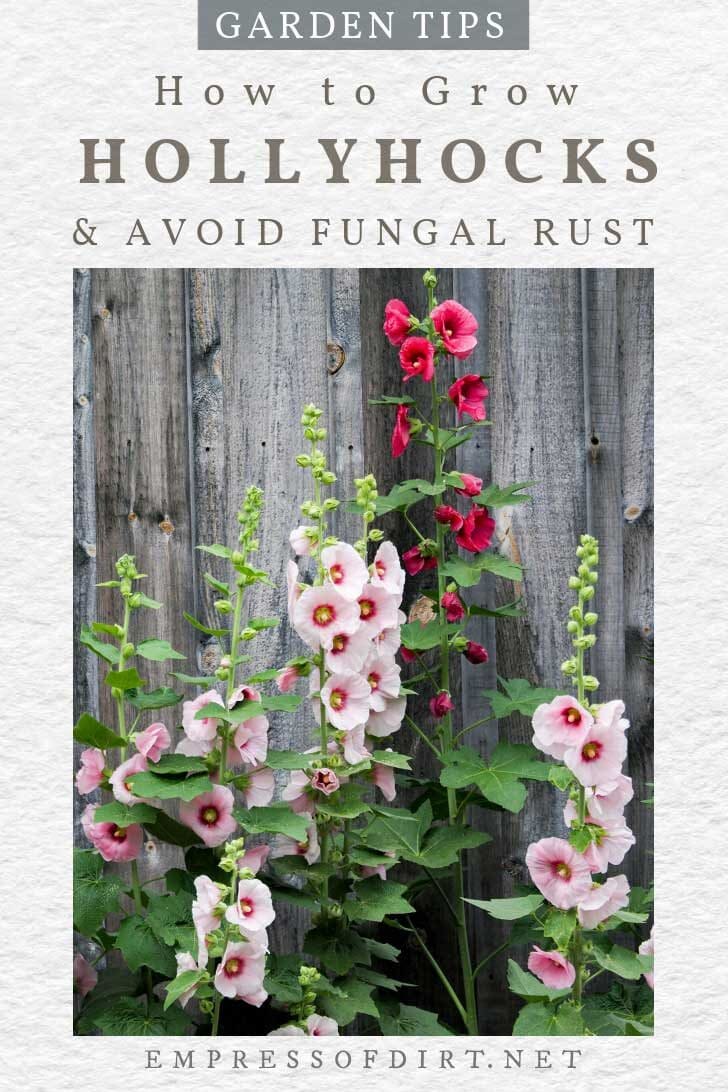