Damping-off is a fairly common problem when starting seeds indoors causing seedlings to wilt and die. Find out what this disease is, how to recognize it, prevention tips, and what to do if your seedlings are affected.

For more tips also see Seed Starting For Beginners: Sow Inside Grow Outside.

The Trouble With Damping-Off

If you grow plants from seed in your home or a greenhouse, at some point over the years you may encounter the disease known as “damping-off.”

This strange, fungal disease is upsetting because one day your seedlings look fine and the next day, as the infection sets in, they can swell, discolor, bend over, rot, and die.

You won’t actually see a fungus but instead notice a group of symptoms that indicate it is present.

While there is no remedy for affected seedlings, there are things you can do in the future to make damping-off less likely to occur.

“Damping-off” is an umbrella term for diseases (or the symptoms of diseases) caused by fungi and other pathogens in the soil. It can also occur in seeds and water.

While it is usually a fungal disease (or several fungal diseases), some of the most common forms of damping-off are actually caused by different microorganisms called oomycetes.

Oomycetes, also known as “water molds,” are not fungi but share some common characteristics with fungi including reproducing by spores.

Together, fungi and oomycetes are the primary cause of damping-off, sometimes working together to cause more damage than they could on their own.

Some common ones are Fusarium (fungi) and Pythium (oomycetes), each with hundreds of different species.

Any time a plant disease involves spores, as with hollyhock rust, we know it’s going to be a widespread, impossible-to-contain problem.

There are various visual symptoms that may occur in seedlings:

You’ll hear gardeners use words like ‘mushy’ and ‘sickly’ and ‘wilting’ as well. Symptoms may vary but, overall, as the grower, you know something is wrong.

Damping-off is often associated with green algae growing on the surface of potting mix. This is because both damping-off and algae favor damp growing conditions but you can have one without the other.

Damping-off can affect seeds and seedlings at any stage—sometimes without us ever knowing it.

Once seedlings have damping-off, it’s game over. They are not going to recover and it’s time to remove all affected potting mix and plants. Following the prevention tips below can help mitigate future problems.

How to Prevent Damping-Off

Before we jump into possible preventative actions, the sad truth is damping-off is a persistent problem for growers around the world.

First identified hundreds of years ago, it remains a multi-million-dollar problem in agriculture today.

As one recent research paper put it:

“Despite a long history and a number of research works conducted on damping-off, it still represents one of the most difficult problems to be managed both in the nurseries and fields. There is no country or geographic area without damping-off problems, on a number of economically important crops.”

It’s fair to say if they can’t prevent it, we can’t either, but there are things we can do to make it less likely to occur.

The goal is to reduce the number of pathogenic fungi and oomycetes by avoiding conditions that help them thrive.

All the basic best practices for indoor seed starting can help. This includes sowing seeds at the recommended depth, providing the right amount of water (not too much or too little), good airflow (oxygen), suitable room and soil temperatures, adequate light, nutrients, and so on.

Here are some preventative steps for the future:

1Clean Your Supplies Before Use

Always clean your tools and trays with soap, water, and household bleach (4 teaspoons bleach per quart of water according to these CDC guidelines) before use.

While it’s a stretch to think they may truly be sterile (and spore-free) in the bag, they most certainly are not sterile once the bag is open (remember, spores are everywhere), but they are still better than garden soil for several reasons. These bagged mixes will have fewer pathogens, be less hospitable to them, and eliminate some other stressors that seedlings can face.

Both fungi and oomycetes typically thrive in wet conditions.

Ensure your growing containers have drainage holes to prevent water from pooling.

Water enough to keep soil moist but not damp.

If you use humidity domes, don’t overdo it. Domes can help retain moisture during germination but ongoing use encourages excess humidity and moisture. Once your seeds sprout, keep the domes off.

Poor airflow is an invitation to pathogens.

Thin out your seedlings to allow good airflow between plants.

You can see my indoor seed starting setup here.

Can you prevent damping-off disease with cinnamon?

We checked the research and there are not any studies testing grocery store cinnamon on seedling trays at home. There are lab studies where other forms of cinnamon do kill certain types of microscopic fungi. You can read more about what is known about cinnamon as a fungicide here.

What To Do If You Suspect Damping-Off

If your seedlings are dying and damping-off is to blame, they are not going to recover.

Remove any affected seeds and their soil (potting mix) to reduce the chance of spreading.

Clean and disinfect tools and supplies prior to next use.

And follow the rest of the prevention tips ongoing.

You can subscribe to our free podcast here: Two Minutes in the Garden.

Seed Starting for Beginners
Sow Inside Grow Outside
by Melissa J. Will

Everything you need to get started with indoor seed starting for indoor and outdoor plants. Grow what you want—any time of year! 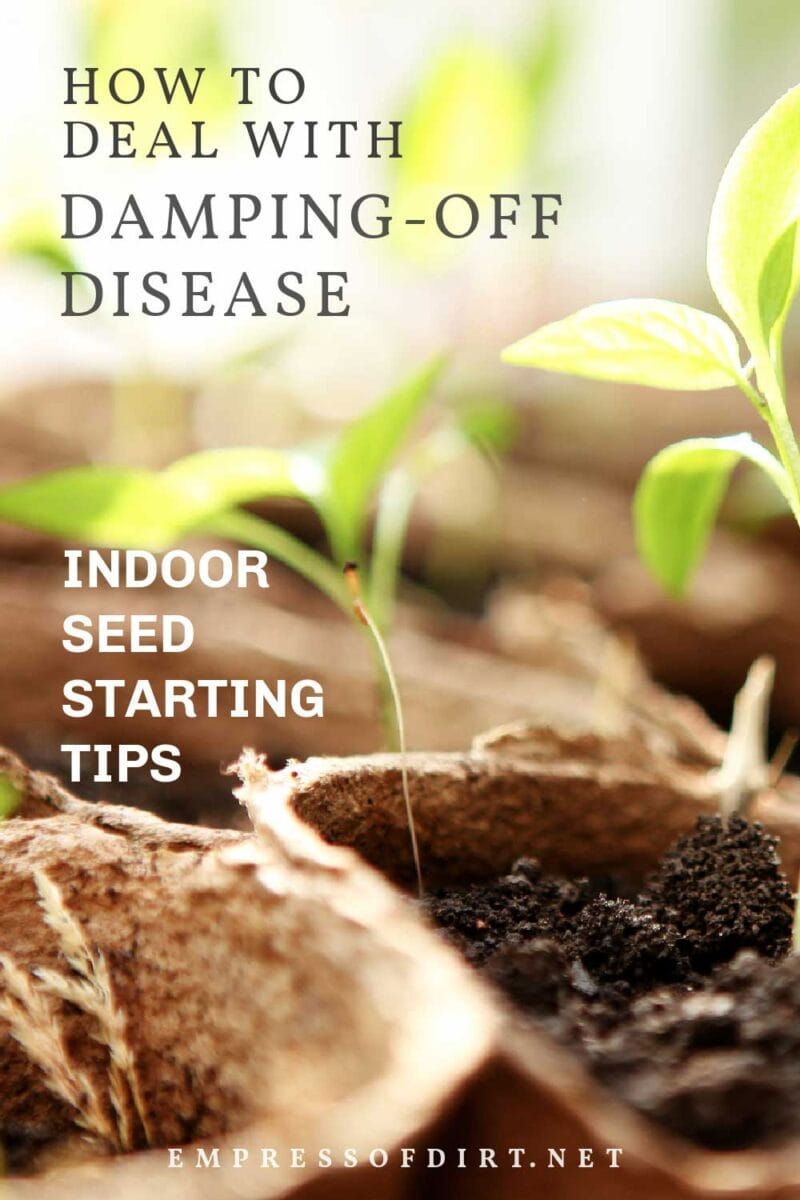