Cinnamon is commonly recommended as a natural fungicide for gardeners wanting to avoid various fungal diseases. Let’s look at whether there is any science to back up the claims and if it has other benefits in the garden.

For more on preventing fungal problems, see Damping-Off—How To Deal With This Seed Starting Problem.

Using Cinnamon As A Fungicide

Have you heard the advice to sprinkle cinnamon on your potting mix or seed starting mix? The ideas is that it might help prevent fungal diseases like damping-off from forming. Some gardeners routinely do this when starting seeds indoors.

Cinnamon is just one of many home remedies from the kitchen cupboard that gardeners share with one another—whether they are proven effective or not. We’ve looked at a bunch of them including questionable uses for Epsom salts and misleading information about eggshells.

So, does cinnamon work? Can it kill fungi?

The short answer is, we don’t know. I’d love it if there was a definitive answer because so many people ask this question, but we just don’t know.

Yes, laboratory studies show that cinnamon can act as a fungicide in certain conditions. It’s not the most effective fungicide but it has been repeatedly demonstrated that it can kill fungi.

So what’s the problem?

There are no studies involving cinnamon as a fungicide for seed starting at home.

The research we have involves different types of cinnamon, various fungi, and other conditions that make it impossible to assume what works for one would work for the other.

So, we don’t have the science to say yes it works. But once you know what’s involved you can decide if it’s something you still want to try.

For my own gardening I always ask, could this help and will it do any harm?

Most Microfungi Are Beneficial Or Harmless

We tend to think of microscopic fungi as bad but it’s just not so.

But there are many thousands of fungal species and most are either harmless or doing beneficial work for life on earth.

This is why it’s important to know specifically what any fungicide might affect or kill as well as any residual damage they can cause.

Cinnamon is a broad term for a spice that comes from the bark of trees in the Cinnamomum genus which is part of the Lauraceae family.

These trees are native to warm climates like Sri Lanka, Indonesia, southern China, and Vietnam.

There are over 300 species of Cinnamomum trees but just a few are used to create cinnamon spice.

Two main ones are:

1) Cinnamomum cassia | This is the most common species used for the low-cost cinnamon powder and sticks found in our grocery stores and the cinnamon used on baked goods like cinnamon rolls.

2) Cinnamomum verum or “true cinnamon” is an expensive, premium cinnamon, sold as a speciality item.

If you check product labels, most just say “ground cinnamon” with no mention of which species you are getting, but you can assume if the price is reasonable that it’s not the premium one.

The Washington Post did a taste test a few years ago and most people didn’t have a preference between the two, but there are Cinnamomum verum aficionados happy to pay the premium price.

Lab Studies Versus Home Use

While quite a few laboratory studies have been done on the effects of cinnamons as fungicides—with good results—there are differences between the studies and what we do at home.

Remember, cinnamon is a broad term, not just one thing.

Researchers are not testing the same cinnamon you have from the grocery store and sprinkling it on soil (or other growing mediums) in a home-like setting.

Instead, most use high concentrations of cinnamon extracts, essential oils, or other suspensions or filtrates. These may be from various Cinnamomum species and extracted from bark or leaves.

In other words, not our cinnamon, our fungi, or our situation.

Perhaps there is one common thread between everything that makes it plausible, but at this point we just don’t know.

Should I try it?

We know what’s used in research is different from our home conditions, but perhaps even store-bought cinnamon powder has some fungicidal properties we can take advantage of.

There are plenty of gardeners who make it a routine to sprinkle some grocery store cinnamon on their potting mix or seed starting mix as a preventative measure.

Is it really preventing damping-off or other fungal problems?

We have no way of knowing for certain. It’s possible but unproven.

Could it do harm?

We don’t know if any harm could come from applying cinnamon to growing medium. It would be great if we had guidance on what works and how much to apply under what conditions, but it’s all a guess at this point.

It seems logical that too little would be ineffective and too much could be detrimental—but how much is just right?

We’re all trying different applications in different settings without any controls.

It’s also unknown whether cinnamon could affect other beneficial fungi or bacteria our plants need as they grow.

We just have anecdotal reports saying some gardeners are happy using cinnamon with their seedlings and don’t seem to have issues with it.

Others may find no appreciable difference.

There are all sorts of claims about the power of cinnamon in the garden but few have any science to back them up.

The countless ways cinnamon is recommended reminds me of the saying, when you have a hammer, everything looks like a nail.

Also, as we discussed, the word cinnamon is used for various species, extracts, oils, and processing methods for plants in the Cinnamomum genus. This means each form may have a different composition and active ingredients.

Is cinnamon good for rooting plants?

Cinnamon is not a rooting hormone and will not stimulate root growth. However, the anti-fungal properties could protect new roots from diseases.

This has more information on types of rooting hormone powders and how they work.

Is cinnamon an insecticide?

There are studies showing cinnamon can kill mosquito larvae, thrips, fleas, diamondback moths, red spider mites (which are arachnids, not insects), and more. These studies are not conducted in home garden settings.

Does cinnamon kill or deter ants?

We could not find any studies about deterring or killing ants at home with grocery store cinnamon powder. There are other studies involving direct contact with a cinnamon oil concentrate in laboratory settings which is a whole other thing.

We could not find any research about cinnamon deterring various mammals we have in our gardens including squirrels. Some people swear it works, others share images of squirrels munching on cinnamon sticks at the bird feeder, so who knows?

Related to this, any advice to use a burning agent like a hot pepper spice to deter squirrels or other animals is considered cruelty to animals and inhumane.

Seed Starting for Beginners
Sow Inside Grow Outside

Everything you need to get started with indoor seed starting for indoor and outdoor plants. Grow what you want—any time of year! 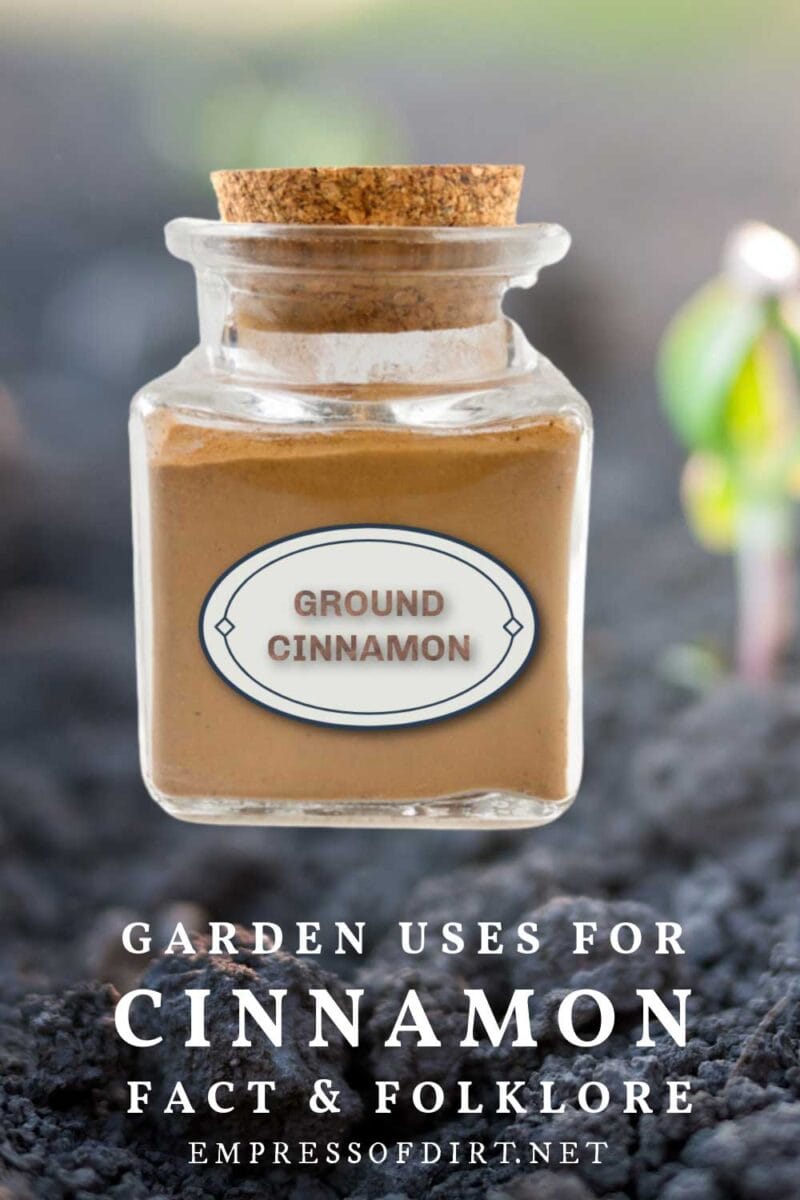