Hollyhock rusts are fungi found around the globe, infecting favorite plants in the Malvaceae family. This includes common old-fashioned hollyhocks, hibiscus, and mallows.

These hollyhock growing tips include recommendations for rust-resistant varieties to try growing in your garden.

Have you ever had hollyhocks grow nice and tall and start flowering only to discover yellow or orange pustules appearing on the leaves?

Those are hollyhock rust spores, from fungi that infect plants in the mallow (Malvaceae) family. Besides the common hollyhock (Alcea rosea) and 80 other hollyhock species in the Alcea genus, other plants affected include hibiscus, mallows, checkerblooms and more.

Most fungi are essential to our ecosystems and cause no harm, but the groups known as “rusts” (over 7000 species), can be real troublemakers, not just in home gardens, but in agriculture as well.

Rust Fungi Are a World-Wide Problem

Costing the agricultural industry billions of dollars in losses each year, if there was a prevention or cure for rust we’d certainly know it.

Coffee, soybeans, trees, and more are all affected.

The rust problem has been studied for years and while there has been some progress, we do not yet know how to prevent or stop it.

All rust fungi are obligate parasites meaning they cannot complete their lifecycle and reproduce without a host. They get their nutrients from the hosts and reproduce on them.

For hollyhock rust, hosts are plants in the Malvaceae family—including hollyhocks.

To use the host, rust spores get through the cuticle or stomata of the plants and grow into and between plant cells.

Unlike mycorrhizal fungi that offer a mutually beneficial relationship, rusts just take what they need and gradually disfigure or weaken the host.

The Lifecycle of Rust Fungi

Many rust fungi go through five different stages of spores over their lifecycle, one after the next.

Many of these rusts need two different host plants to survive. Not just two individual plants but two completely unrelated plants from different genera and species.

Often we can spot rust on a single plant but, for many of the fungi, we don’t yet know where they go from there or where they’ve been. In other words, we have identified one host but who is the other?

Research is making progress as molecular and genetic testing improves, but the full lifecycle for many fungi is still a mystery.

Hollyhock rust, though, is an exception.

Unlike some other rusts that require two host plants and go through several spore stages, hollyhock rust is simpler.

Hollyhock rust is autoecious, meaning it just needs one host, and it is microcyclic, with just two stages of spores. That’s why we don’t have to worry about these particular rusts spreading to other unrelated plants in our gardens—only hollyhocks can sustain them.

There are ten known hollyhock rusts but just two we are most likely to encounter.

They have slightly different appearances but the result is the same.

The first sign of rust is usually orange-yellow spots on the top sides of leaves. The lower leaves are usually infected first which can make it hard to detect early on unless we’re looking for it.

On the underside of leaves there will be raised spots or pustules, usually reddish-orange-brown in color.

There may also be pustules on the stem.

The fungi don’t want to kill the plant—they need the host to survive—but some of the infected leaves can eventually die. As it cumulates, rust also interferes with photosynthesis which in turn weakens the plant and makes it more susceptible to other diseases.

How to Deal With Hollyhock Rust

As you’ve gathered, there is not a lot we can do to deal with currently infected plants other than trying to stop the spread.

The (relative) good news is that hollyhock rust will not spread to plants outside the Malvaceae family. Your other plants may have other diseases to contend with but not this.

If you can catch the first infected leaves before the rust spreads up the plant, you may spare the plant and any not-yet-infected related plants nearby.

If the rust is winning, you may want to cut the plant right down the ground (if perennial) or remove it entirely (if annual), disposing of everything. There are tips for safe disposal of diseased plants here.

If starting over, consider trying a rust-resistant variety.

Should I Use Fungicide?

No, not if you choose to garden in an eco-beneficial way. Fungicides are toxic to a broad range of organisms including bees and harm our waterways.

If you mention hollyhock rust at a plant nursery they may very well recommend a product marketed as “hollyhock rust fungicide” but these are not specific. The ingredients are intended to stop fungal spores—from any fungi—from germinating. So, you’re not just treating hollyhock rust but any fungi present, and that means all the good fungi too.

Plus, it’s a losing battle.

If you think about it, with countless spores out there in the world, how could we possibly expect a dose of anything to stop them all? Rust is in our gardens and all of nature. We’re just one gust of wind away from a new infection at any time.

In the end, hollyhock rust is managed not cured. You can do everything right and still have issues with it.

These tips for growing hollyhocks can help but, in the end, it’s a fungi world and we just live in it. 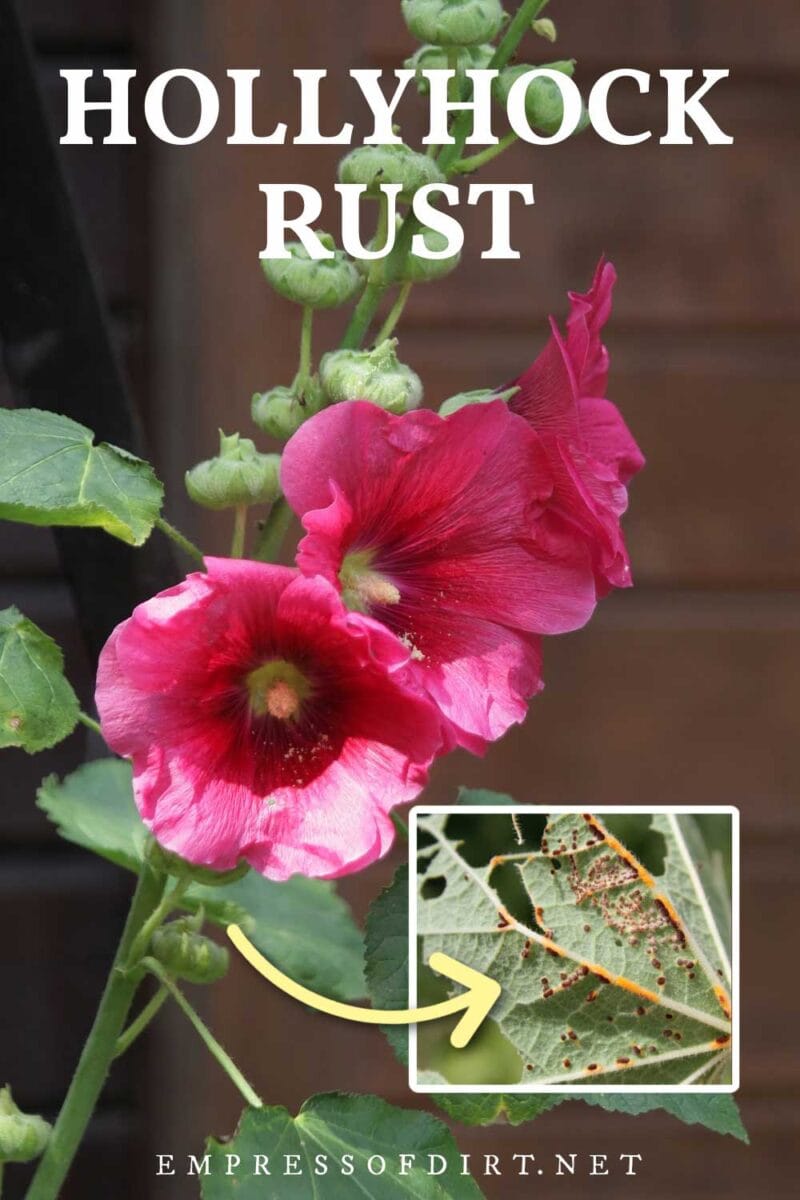