Gardening by the phases of the moon has been practiced throughout the ages. Renewed interest surfaced in the 20th Century with Austrian philosopher Rudolf Steiner and his followers. Various other prominent gardeners including Charles Dowding have also explored lunar gardening in recent decades.

Is there a benefit to this type of gardening? See Moon Gardening: Does it Make Sense? for more.

While the idea of gardening by the phases of the Moon has been around for ages, the modern era of Moon gardening really begins with Rudolf Steiner in the 1920s.

We talked about Steiner briefly in our podcast series on companion planting. If you’re not familiar with him, he is difficult to sum up in a sentence, but his Wikipedia entry begins by calling him “an Austrian philosopher, social reformer, architect, esotericist, and claimed clairvoyant….” so we’ll go with that. He was the founder of a spiritual philosophy called anthroposophy that continues to have many adherents today. You may know him as the founder of Waldorf (Steiner) schools.

Today, those lectures are considered by many to mark the birth of organic agriculture and organic gardening—although those terms weren’t being used yet.

Steiner’s agriculture went on to be fleshed out by his followers and became known as biodynamics. You can certainly find things Steiner was saying that sound many years ahead of their time in promoting an organic approach. But, with Steiner, they were all said within an occult and spiritual context with “life forces” and “cosmic energies”. It was and is not science-based.

Something colossal is taking place on Earth…

What survived from those 1924 lectures was cobbled together from the notes of some of the attendees. Steiner didn’t think his ideas were ready to be published yet but then he died, so they were his last word on the subject. He had a lot to say about the Moon, planets, Sun, and other stars—they all had an influence on plants. He said the Moon was clearly connected to water, and on days with a full moon “something colossal is taking place on Earth.”

Nature is not so cruel as to punish us if we are not paying attention to the phase of the Moon.

Contrary to popular belief, Steiner did not think we had to plant by the phase of the Moon. In his lectures he said that “Nature is not so cruel as to punish” us if we weren’t paying attention to the phase of the Moon. After all, the Moon will cycle through its phases 12 times a year, so if we “perform what tends to fertilization” at the wrong time—so, not at the full moon— that’s fine—”it will simply wait in the Earth till the next full Moon. So it gets over our human errors and takes its cue from great Nature.”

Sometimes we need to counteract the Moon’s forces…

He actually said that we sometimes needed to counteract the Moon’s forces, since they would just as soon help a weed as a plant we want to grow. He also said you oppose the effect of the Moon on weeds by gathering seeds from those weeds, burning them, and spreading their ashes on your garden. And after four years of that, those weeds will no longer be present. Or so he claimed. We can’t turn off the Moon, but we can make weeds “disinclined to receive lunar influences”.

Steiner also thought that it was during the full moon that the cosmic forces, not just of the Moon, but of the entire universe, were transmitted to Earth through the Moon “though we may not be able to prove it by the customary physical methods of today”. And he wondered what results they could get if they tried sowing seeds by phases of the Moon.

That challenge was taken up by one of his followers, Lilly Kolisko, who had attended his lectures—and was one of the people who took notes. She then spent years trying to provide support for Steiner’s ideas by performing a series of experiments starting a few months after Steiner’s death and continued for nearly a decade.

The results were published in a book translated into English as Moon and Plant Growth, published in the 1930s. And Kolisko found, time after time, with a variety of vegetables, that ones that were planted a couple of days before a full moon did best—and far better than those planted before a new moon.

Lettuce, tomatoes, beans, peas, carrots, and more, both grew better and tasted better, she said. But they had to be planted just before the full moon so they could be ready to take in the full force at full moon and the days that follow. Planting them on the full moon didn’t work.

The science publication Nature had an article in 1946, about ten years after Kolisko’s experiments, that described how no one else had been able to find the connection she did.

The only experimental evidence for the existence of lunar influence on the growth of land plants is that published by L. Kolisko. All other investigators in many parts of the world have been unable to discover any consistent correlation between the Moon and the vital processes of land plants; some admit that if a lunar effect does exist it is so obscure as to have no value in agricultural practice.

Steiner supporters might not be troubled by that though, since they hold that the belief that the attitudes of the experimenters influence the results they get.

From there, Maria Thun, another Steiner follower, started conducting her own experiments in the 1950s. Sometimes agreeing with Kolisko’s results, sometimes not. Thun also added the influence of the signs of the zodiac to the Moon’s effects.

So, for example, leafy crops do best when planted when the Moon is in a constellation associated with water and root crops when the Moon is passing through one of the earthy constellations. And the Moon passes through a sign every two or three days. She began producing a planting calendar in the 1960s, and new ones are still published today.

In one of her calendars, she wrote:

And if that resonates with you, then you may get a lot out of it. If it sounds like mumbo jumbo, then it’s probably not a good fit.

Another person influenced by Steiner was Alan Chadwick, an English gardener who moved to the U.S. in his 50s and became one of the most influential proponents of organic agriculture in the country in the 1960s and 70s. His mother was an anthroposophist and he spent a summer as a teenager working on a Steiner-influenced farm in Germany and Chadwick incorporated Moon gardening into his ideas.

Chadwick was a major influence on John Jeavons, who’s been based in California for years and, among other things, is the author of the very popular book How to Grow More Vegetables, first published in 1974 and now in its ninth edition. His book devotes an entire section to planting by the phases of the Moon.

Louise Riotte, author of the best seller Carrots Love Tomatoes, first published in 1976 and still a top-10 selling garden book on Amazon today, was certainly influenced by Steiner and wrote books on astrological gardening as well.

Since then we’ve seen Charles Dowding of no-dig gardening fame, write about testing his plantings by the phase of the moon and constellations. He reported mixed results.

As far as science goes, any evidence that it is beneficial to plant (or harvest) in coordination with specific moon phases or constellations remains purely anecdotal.

I’ll leave it to you to decide whether you believe in those cosmic forces. 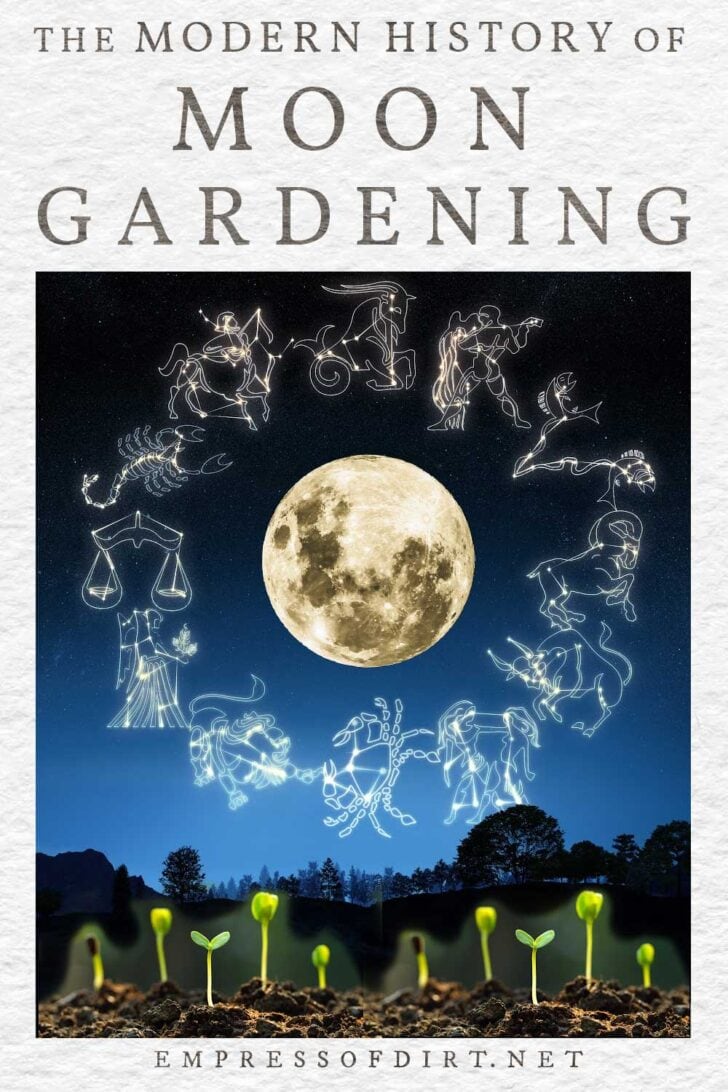