We’ve been told for years that houseplants purify the air and help remove pollutants or ‘detox’ our homes—claiming NASA proved it—but is this true? Spoiler alert: we read the research and, sorry, plants, we love you but you’re not cleaning the air.

Keep reading to see the details. Our love of plants isn’t going anywhere—just the myths are—and I’ve got plenty of tips here for growing houseplants.

How it All Began

There are a lot of unwanted chemicals in the air in our homes—pollutants given off by furniture, fabrics, upholstery, carpets, paints, and many other things. Mostly, we do okay with them, but in the wrong amounts or mixes they can lead to problems like sore throats, eye irritation, headaches, dizziness and worse.

You’ve probably heard stories about how houseplants pull these chemicals from the air and make our air fresher.

The best-known study that made this claim, and gets mentioned all the time, was conducted by NASA—the space people. Being able to drop NASA’s name makes anything seem cooler, and it’s used a lot when people write about plants and air freshness1.

Back in the 1980s, a scientist name Bill Wolverton—who really did work for NASA—published research claiming that plants removed various chemicals like benzene and formaldehyde from the air, which we do not want in our homes.

Ten years later and retired from NASA, Wolverton started his own company and wrote a popular book (still available on Amazon) called “How to Grow Fresh Air: 50 House Plants that Purify Your Home or Office”.  His findings got a lot of coverage into the 1990s and people loved to hear their plants were making the air fresher.

But, not so fast.

The laboratory conditions in the study did not in any way resemble what you’d find in an actual home or office—a factor which, of course, is not unusual with lab research.

The tests were done in airtight two-and-a-half foot cubes. Some were twice that height: five-feet tall. Very small areas, with no ventilation, and given levels of chemicals far beyond what you’d ever have in your home.

One of the sponsors of Wolverton’s research, the Associated Landscape Contractors of America, also paid for a field trial2 which found that—in a real-world setting—plants really made no difference in air quality.

The results were a complete flop.

Trying to Get Lab Study Results in Home

So, plants could help in a confined cube, but what about a home? What if there were a lot more plants? Would that work?

And how many would it take to improve air quality?

The professional landscaping group that sponsored the research at NASA and the failed field trial, said one plant per 100 square feet of floor space, but no one could figure out where that number came from.

It conveniently worked out to be a number that’s achievable in the real world. Even Bill Wolverton thought that was too low. He thought maybe 2, 3, 4 plants per 100 square feet, but wasn’t sure.

A critic of the research from the U.S. Environmental Protection Agency did his own calculations and said the actual number would be about 45 plants per 100 square feet or nearly 700 plants in an average house, which suddenly isn’t so realistic. Though I must admit that 700 plants sounds rather dreamy to some of us, and Summer Rayne Oaks probably has that many.

But none of this stopped the story being told that NASA had proved that plants improve air quality. There were books and services to be sold hyping this. Plants to be sold. And, in some cases, that seemed to be more of a priority than the science. If you’ve seen listicles of “plants that purify the air”, there is probably not much science there, even if they mention NASA.

What We Know Today

Recently, the University of Washington in Seattle looked at whether plants remove volatile organic compounds from the air3. They acknowledged that results from previous studies have been inconsistent, but they still have hope something can be figured out.

The specific chemicals they looked at were benzene and chloroform. And the plant they selected was a golden pothos, the pothos vine or ivy also known as devil’s ivy or Ceylon creeper. You may have one of these common houseplants in your home. They chose it for a few reasons: it grows well in low light and it doesn’t flower. Theoretically, it could flower, but it hasn’t happened without artificial stimulation in over 50 years.

They started off with just regular plants from the store, but then did some work with them, starting with sterilization. They ended up with what they called “transformed pothos” along with your regular pothos. Then, they exposed the plants to benzene and chloroform under very controlled laboratory conditions using vials—these were not field tests in any way.

The regular pothos did nothing to remove the chemicals. The transformed pothos, on the other hand, removed most of the benzene and all the chloroform within six days. A very promising result, suggesting that maybe houseplants will be able to remove pollutants in the air.

But what was the transformation that made the pothos effective?

Well, they genetically modified the plant by adding a mammalian cytochrome, from a rabbit in this case, it could have come from a different mammal, but they went with rabbit.

The gene was known to oxidize benzene and chloroform, and, sure enough, when they added it to the plant, it created those results. Which is why they preferred a plant that doesn’t flower, so there’s less chance of any GMO genes getting into the environment.

They haven’t tried it yet, but there are other genes that could be engineered into the plant to remove other chemicals from the air like formaldehyde. If you’re already anxious about GMOs, I guess this won’t help any, but the research will continue and they’re excited about the possibilities.

There has been more research since then, with more claims but it’s the original NASA lab study that still gets quoted.

Since our homes do not replicate the controlled lab conditions (tiny, unventilated spaces filled with plants), you can see why the research is underwhelming.

There’s plenty of other good reasons to fill your home with houseplants—of course!—, but counting on air purification—unless you’ve got an indoor jungle—does not seem to be one of them.

See it on Amazon

Tropical plants are energizing. They awaken a tired summer garden with lush, sensuous foliage and fascinating flowers and turn a suburban patio into a sophisticated, late-night paradise. But if you garden in a temperate climate and have been reluctant to commit to what you’re sure will be too much work, it’s time to let Tropical Plants and How to Love Them author Marianne Willburn act as your tropical matchmaker. 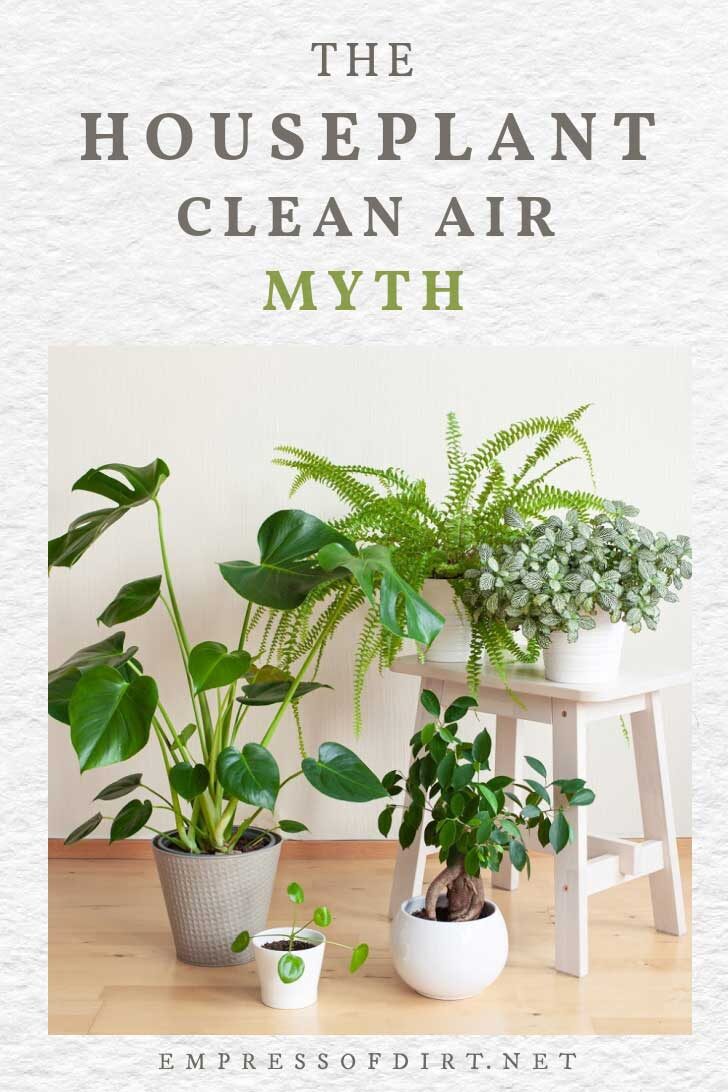