Gardening by the phases of the moon dates back thousands of years, but is there any evidence that planting or harvesting in coordination with the lunar cycles really helps? We know the moon has a tremendous influence on our planet, but will I get better vegetables if I plant with the waxing or waning moon in a certain star sign? Let’s have a look at what we know.

For more on the background, The Modern History of Moon Gardening discusses how everyone from Rudolf Steiner to Charles Dowding have explored this subject.

Have you ever wondered if there could be some real benefit to planting or harvesting crops in coordination with the phases of the moon? Or what about the constellations or star signs? Could any of these things really make a difference?

Moon gardening has been around for ages and there are plenty of gardeners who feel it works for them. I’ve seen it mentioned so many times in gardening books over the years that I always assumed it had some validity.

So what is moon gardening?

Lunar gardening instructions vary depending on which moon gardening calendar you read—which in itself makes it difficult to assess—but the belief is that, despite the contradictory instructions, certain forces are at work and we can work with them for better crops.

This is one example.

Depending on which calendar you follow, the planting might take place days ahead, just before, or at the time of the lunar phase.

Many take it a step further and include astrology so best planting times align with the moon being in certain constellations, although the details vary depending on which calendar you follow.

It is believed, if the timing is right, the plants will benefit from the desired “cosmic forces”.

You can listen to this information in this 3-part podcast series, or continue reading.

The Moon’s Influence on Earth

It’s easy to see why the moon is thought to have such an influence over our gardens since it does have tremendous influence over the earth as a whole.

It is not an understatement to say that life on earth would be drastically different if we did not have our moon.

Nature has co-evolved with the tides and moonlight. We’re learning more all the time about how tides affect plants and animal behaviors.

But moon gardening is specifically about planting in coordination with lunar phases, implying there are different forces at work at different times of the lunar month and these are measurable in our vegetable crops.

Does this make sense with what we know?

We know the moon and sun each cause ocean tides—and, fun fact—they also cause (solid) earth tides as well. The whole planet is constantly bulging with their gravitational forces as we orbit the sun and the moon orbits the earth. The video (below) gives a good visualization of this.

In general, there are two high tides and two low tides every day. They go through a full cycle about every 12 hours and 24 minutes, or from high to low tide in half that time, so every six hours and a bit.

Two-thirds of tides are caused by the moon and these tides are the same no matter what phase the moon is in.

It’s when the sun’s pull is in line with the moon’s pull that we get spring tides with the highest high tides.

Knowing the gravitational force of the moon (and sun) pulls these massive bodies of water on earth, it seems plausible that it could have a similar effect on the water in our plants and garden soil—or our bodies—perhaps pulling it up and letting it down in some sort of plant tides.

We think, if the moon can pull something so massive, surely it must be affecting all these small things as well?

But the power is in the mass, as you’ll see.

This video gives a good visualization of how tides work:

The moon and sun can pull the oceans because they are liquid and massive, covering much of our planet.

Smaller bodies of water do not have tides—or the tides created are so miniscule that they are considered completely insignificant.  Not even our Great Lakes (Ontario, Erie, Huron, Superior, Michigan), which are still a fair size, containing a huge volume of water, are massive enough to heed to the pull more than a couple of inches.

Scale this idea down to the tiny amounts of water in plants, and tides at this level are not happening.

Astro-physicist Neil DeGrasse Tyson gives a similar example using our skulls since, like plants, we contain a lot of water too. If you were lying in bed with a pillow over your head, the pillow’s gravitational forces on your head would be trillions of times stronger than that of the gravitational forces of the moon and sun on your noggin.

Plus, knowing how water travels through the cells of plants, it would be physically impossible for water to move so frequently up and down the stems several times a day in sync with the tides. Or, we’d know it if it did.

This is not to say the moon has no influence on plants—it does. But with no tides at this granular level, there is no evidence that how we time our planting in relation to the moon matters. And attempts to give a scientific explanation mostly just come across as bad science.

What About the Influence of Astrological Signs?

If you accept spiritual explanations, you might say there is nothing arbitrary about them, and perhaps the people who came up with constellations were tuned into some sort of cosmic wisdom.

From the scientific perspective, they are random human-assigned groupings of stars, and stars that aren’t even remotely close together in the universe (in most cases)—so how could they even have an influence over the timing of our garden planting?

It’s one thing to say the moon’s gravitational force and reflected light from the sun have an influence on life on earth—we know they do.

It’s quite another to say the moon has special powers depending on the very time and day we put a seed or plant in the ground or remove it for harvesting.

Moon gardening supporters can give you a list of research they feel shows it does work, but you’ll be hard-pressed to find anything recognizable as a scientific journal among the sources. And there have certainly been at least as many not-exactly scientific trials that have not come out well for moon gardening.

If you think about how to A/B test it using a control study, it’s rather impossible since it involves a moment in time and growing conditions (temperature, light, water…) are ever-changing as days go by. Planting the same crop days or weeks apart to test different phases or constellations introduces countless variables in growing conditions.

No. Although strictly following a moon gardening calendar could mess things up.

Let’s look at spring vegetable gardening as an example.

When I start my spring crops, I’m watching the weather and navigating the average last frost date in my area, which can vary by a few weeks each year, often arriving earlier or later than anticipated.

I’m also paying attention to the soil temperature, waiting until, within the right time frame, the soil is sufficiently warm for seed germination.

On top of that, I’m considering soil quality and nutrition, planting location, sun, water, shade, when I have the time to plant, and so on.

With all that to juggle, am I really going to wait for a waxing or waning moon too?

With a new moon or full moon just once every 28 days, planting too early could kill the young plants. Holding off for the right moon phase could leave them without sufficient time to mature before fall.

Should I plant the asparagus crowns early to be sure the moon is in Pisces and not in Taurus, even though the growing conditions aren’t yet right?

Should I hold off planting my tomatoes when everything is ready go because the moon is in Aquarius and the moon gardening calendar says they’ll do better in Aries?

I know some gardeners embrace both the practical and the cosmic—or the stuff they say science has just not caught up to yet.

They cover the proven basics but say they also think their crops get an extra boost when their timing happens to align with the prescribed lunar phases.

No harm in that and to each her own. But any evidence that moon gardening is beneficial remains anecdotal. 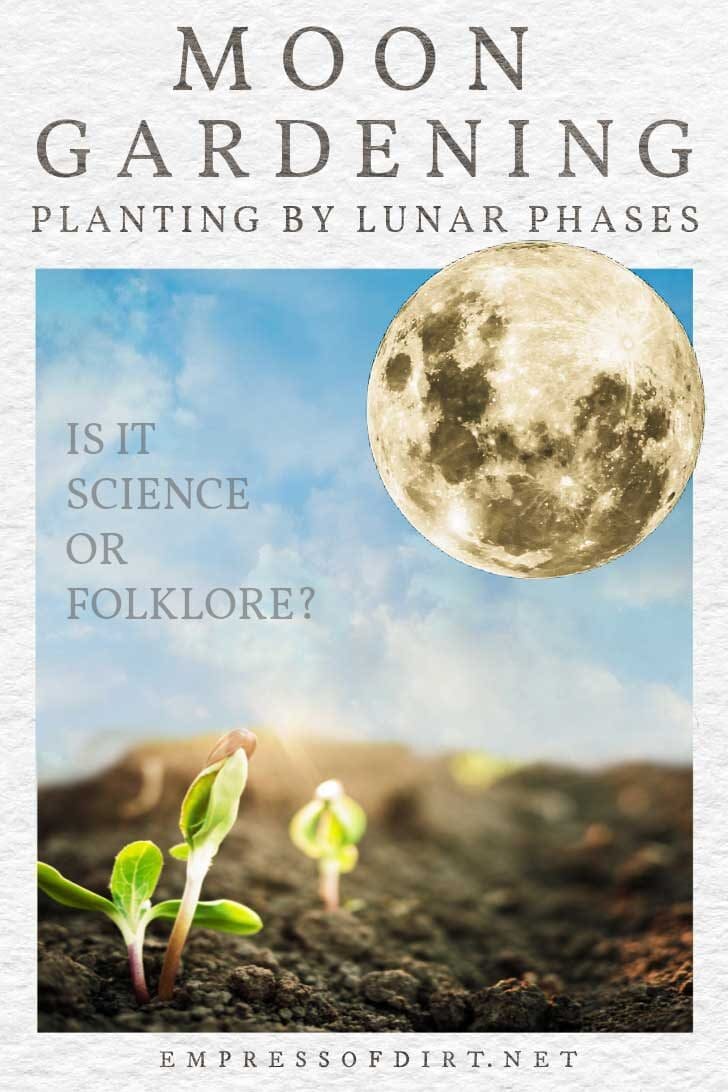