Does hitting a tree help stimulate growth? Should you shampoo your lawn? These are just a few of the questionable tips shared over the years by popular TV personality and garden book author Jerry Baker.

If you have an interest in fact-checking garden tips, also see Popular Garden Myths We’ve All Fallen For.

Should you shampoo your lawn?
No. Need I say more?

I recently came across the advice to whack or hit a tree to encourage better growth and thought it was time to find out why this rather unusual (and misleading) garden tip has endured for so long.

Passed along in garden circles for over 50 years, the tree whacking tip is shared as folksy garden wisdom. It’s the stuff people claim always worked for their grandparents or some friend swears by.

Variations include whacking the languishing tree with a baseball bat, tree branch, water hose, or rolled up newspaper.

While this tip seems to have no merit, and could do harm, it’s interesting to look back and see how it became popular.

Turns out, this and a bunch of other unusual garden tips all came from the same, very popular source.

On message boards, many people associate tree whacking with Jerry Baker. Not that he invented it, but he was its most prominent proponent.

He died a few years ago, but his books are still available today.

There were dozens of titles published in his lifetime although there was always some question about exactly how much gardening or writing Baker actually did himself.

Ghost-written or not, he definitely worked hard to establish his name and put on an entertaining show in the process.

From 1969 to 1971, Baker quickly went from a guy starting a garden column in a Detroit newspaper to someone regularly appearing on national TV shows as a gardening expert.

This included The Tonight Show with Johnny Carson, which was the top of the food chain in those days. Also during that time he authored—or was the credited author—of a very successful book, with a second one a couple of years later.

Baker modestly called himself “America’s Master Gardener” right out of the gate, years before master gardener volunteer programs were established in the United States and Canada.

Some people thought Baker pinched the title “master gardener” but he actually did use it first.

Jerry Baker understood the value of a PR hook. One hook—of several—was to recommend you regularly shampoo your lawn. He suggested including the garden beds too but the lawn tip was the one that created a ton of buzz.

Keep in mind, this was in the peak era of the push to make one’s lawn the envy of the neighborhood using goodness knows how many products with zero concern for the environment.

The “shampoo” he recommended for lawns and gardens included tobacco juice and mouthwash—and you were to do this every week. And that’s on top of the spray that included beer, dish detergent, and molasses, which was to be applied every three weeks.

Baker was also fine with spraying all sorts of commercial pesticides if somehow mouthwash and detergent didn’t get the job done. Listerine and Coca-Cola were also among many other things he said were great for plants as well.

A Remedy For Everything

There has been a lot of discussion of “garden myths” over the last 10 or 20 years, and, in large part, that’s been a response to the previous 30 or 40 years of Jerry Baker’s recommendations.

Horticultural scientist Jeff Gillman tackled the topic over fifteen years ago in his book, The Truth About Garden Remedies, warning of the dangers of many of the things Baker included in his sprays.

Everything you’ve ever heard suggested for the garden was probably included in one of Baker’s books. Each had an over-the-top subtitle like 1,954 Natural Remedies to Handle Your Toughest Garden Problems.

Another of Baker’s gimmicks was to say most of these concoctions came from his gramma who apparently was the embodiment of supposed old-time wisdom. At some point early on she even became part Indigenous.

When she was first introduced, the story was that Baker had spent 10 months living with her when he was six. But she became such an essential trope in his writing that this later became three years.

At first she dies in her 60s, but later she had lived into her 80s. It was a flexible life story, if you will.

It would be interesting to know if any avid fans noticed these discrepancies over time. But, given Baker’s popularity, I imagine his embellishments were part of the charm.

Baker’s first book, Plants Are Like People, was published in 1971. I don’t know how well-known he was outside the United States and Canada, but there was definitely an edition edited for UK audiences.

Most of the book was actually about lawns and trees, but there were also short chapters on vegetable gardening, flowers, and houseplants.

In that first book, Baker gave his advice:

“From time to time we find a lazy bones…in our garden…a lazy tree, lying down on the job, not producing enough shade because his leaves are not thick enough. What he needs is a rude but effective awakening. To wake up a sleepy tree and get him back to work, you whip him…give him a good spanking with a stick on his trunk. …the nurseryman calls this whipping act “scoring.” … I use a four-foot soft switch, not a ball bat. I want to wake him up, not break his back.”

That sounds like it’s pointing to an explanation—scoring. Except that is not what scoring is.

Scoring is a method used by citrus growers where they carefully cut into the trunk of a tree, all the way around, through the inner bark, but no deeper.

With the bark scored, the flow of sugary substances (produced in the leaves by photosynthesis) to the roots is halted, leaving more available for the fruit. The process is also thought to speed up harvest times.

It’s a tricky procedure and nothing to do with clobbering your tree.

On the other hand, some try to justify whacking a tree claiming it actually improves the flow of sap, similar (somehow) to unclogging arteries.

These days, tree whacking advice comes with an updated explanation. Some say that hitting the trunk triggers the production of a hormone called traumatin which in turn leads to better growth.

On the face of it, this is a more plausible explanation—if whacking actually worked.

As plant hormones go, traumatin is pretty obscure, so it sounds like something that could have come from scientific research instead of Baker’s ever-changing Gramma, unless she also happened to be a botanist with an active imagination.

But, as you’ve probably guessed by now, we couldn’t find any research to support the claim that bashing a tree leads to better growth, whether through the production of traumatin or some other mechanism.

This doesn’t mean it cannot happen with any tree under and circumstances though. In our podcast, Two Minutes in the Garden, we’ve done episodes looking at the real effects that shaking and brushing your plants can have, something known as thigmomorphogenesis. (See Episodes 300 and 301.) But that’s quite different then giving your tree trunks a wallop.

A 1999 article in USA Today said that Baker “receives nearly universal condemnation from plant scientists.” He was often called a quack or worse—which continues even in death—as does the sale of his books.

Baker once said that the biggest mistake gardeners make is overcomplicating things. This is amusing coming from a guy who put out books with subtitles like:

Baker appealed to people who always want to be doing something to their garden—amending, spraying or whatever. And bashing trees! Whether it helped or not.

These old made-up remedies play hard on the idea that something must be harmless because it’s in our kitchen cupboards (wrong).

Today, with an emphasis on the bigger picture including the roles our gardens play in the eco-system as a whole, the more useful questions are: does this stuff even belong in a garden and could it do harm? 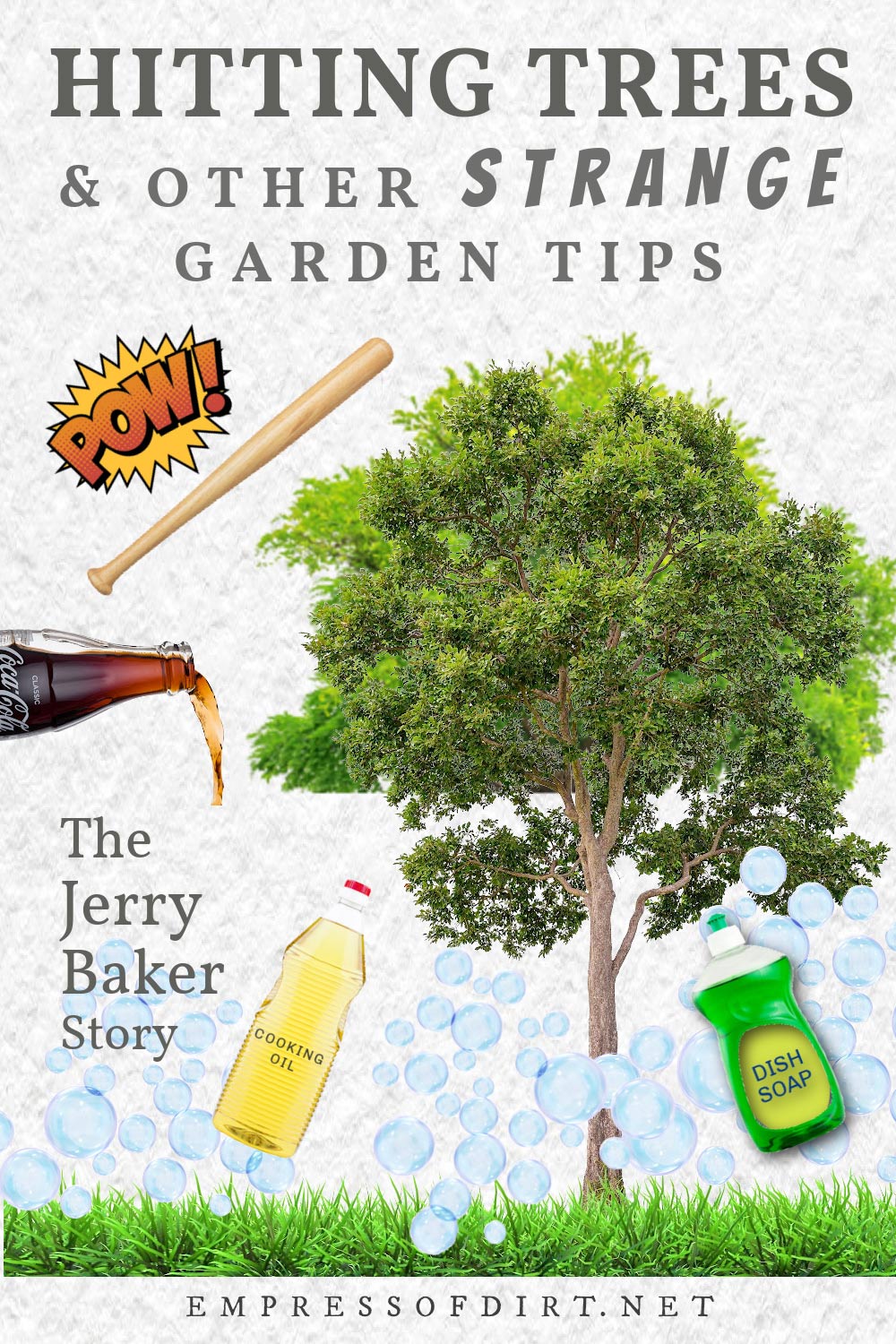