Let’s have a look at biochar as a soil amendment to find out whether we should use it in our home gardens. There are various pros and cons and suitability will depend on various factors including your soil conditions.

To enrich your soil, also consider keeping compost and adding it to your garden beds.

Biochar in the Home Garden

There are a lot of discussions lately about the use of biochar as a soil amendment in the home garden so it’s time to check the research, learn the pros and cons, find out exactly what it can do, and decide if it would benefit our own gardens.

Before we answer common questions, here is the quick answer.

Like any soil amendment including fertilizers, biochar should only be applied to meet a specific, measurable need. And, because it’s a fairly costly amendment, there are usually other options available to achieve the same results at a more reasonable cost.

Biochar is simply charcoal for the soil. Some biochar supporters don’t like the word ‘charcoal’ because of the negative associations, but that’s what biochar is.

It’s organic material like wood, grass, agricultural waste, manure (and so on) that is burned in conditions where there’s little to no oxygen. ‘Burn’ can also be an unpopular word—some prefer ‘heated to high temperatures,’ or you can use the more scientific term, pyrolyzed.

Wood ash (the stuff that is leftover after you burn wood in a fireplace) is different. Because it is created with oxygen present, the carbon burns off into the atmosphere, leaving behind other matter, depending on the wood source. This discusses whether wood ash is a good soil amendment.

What is the Difference Between Biochar and Charcoal Briquettes?

The charcoal briquettes made for barbeques or grilling have additives including accelerants to make ignition and burning easier. In other words, a bunch of things you would not want in your soil.

Pure charcoal and biochar (if also pure) are the same thing.

Biochar may increase soil porosity, improving the water-holding capacity, making it easier for plants to take up water, nutrients, and air, all while providing a more hospitable environment for microorganisms.

Biochar can also raise soil pH levels. This can be an advantage or disadvantage depending on the situation.

In our podcast episode on Why Ions Are Critical for Plants, we learned that most of the nutrients that feed our plants are also ions. We call them by their elemental names—nitrogen, calcium, sulfur and so on—but the forms that the plants can take up and use are actually ions.

And the concentration of hydrogen ions in the soil—the pH—changes how these elements and molecules react and combine with each other.

A lot that goes on in our soil—even the uptake of water—is driven by differences in electrical charges. And at certain pH levels, it gets much harder for plants to get the nutrients they need. The nutrients may be in the soil, but they’re in forms that aren’t available to plants. And some elements can get to toxic levels in the soil—all because of what reacts with what and which compounds end up in the soil.

Already you can see that it’s not a general soil amendment but one that only suits specific needs.

Will Biochar Help the Plants in My Garden?

There’s no clear-cut answer: it depends. Biochar has fans who swear by it. Scientific studies have been hit-and-miss and mostly look at agricultural uses or involve tests in a lab that may not tell us much about how biochar works in a home garden.

One of the challenges in assessing biochar is that it’s not a single, uniform substance. Its properties depend on what it was made from and how it was made, which means that your biochar may be very different from someone else’s.

Or the biochar you buy this year may be different from what you got last time.

And tests have also shown considerable variation in the results depending on the specific soil and conditions it was used in—so, your soil texture and climate, for example, will have an effect on what biochar does.

Related: Tips for Using Animal Manures to Enrich Your Soil

What Does Biochar Research Tell Us?

There’s been a lot of research into biochar in recent years and a steady onslaught of new findings, so it would be a full-time job to keep up on all of it.

But you can find some results that give support to its use under certain conditions and others that cast doubts on it.

A 2013 “meta-analysis” published in the journal Plant & Soil combined results from 103 different published studies and found an average 11% increase in crop productivity when biochar was applied as a soil amendment. [Source]

That sounds promising until you find out that the good results were almost entirely in acidic (pH less than 5.0), degraded soils with low levels of organic matter and nutrients, located in tropical and subtropical regions.

If that describes your garden soil, then you probably have bigger issues than whether to try biochar.

Otherwise, biochar really didn’t do anything and often had a negative effect.

A 2017 review by different researchers published in Environmental Research Letters (based on 109 independent studies) found similar results and was titled “Biochar boosts tropical but not temperate crop yields”. [Source]

As mentioned, there are other, more reliable, and far less expensive ways for gardeners to replenish organic matter and nutrients than applying biochar—compost and composted manure, for example.

Traditional liming (adding lime to the soil) would be just as effective in raising soil pH if that’s what you’re looking for.

Is Biochar Safe to Use?

There is no universal answer on this one. There are plenty of anecdotal reports of biochar’s usefulness.

Meanwhile, there have been some tests where biochar seemed to make things worse—suppressing plant growth and reducing nutrient availability—and it stays in the soil for a very long time. We’re not sure exactly how long, but it’ll be there for the rest of your life and then some.

If it doesn’t go right, it’s a problem that won’t be easy to get rid of.

Step one is to get a soil test to determine if there is a measurable need or possible benefit to adding biochar.

From there, it’s probably best to start on a small patch of your garden and be prepared for some experimentation and failure. Chances are, in low amounts, it’ll be fine, but it’s not risk-free.

As mentioned, it’s a pricey product compared to other soil amendments that may just as well achieve the desired result.

Can I Make My Own Biochar?

To me, this is not a DIY project. But, if you’re interested, the first step is to confirm it’s legal to produce biochar in your area. There are always potential dangers with fires and the release of toxins into the environment during the burning process.

On a practical level, we know you can certainly burn/heat organic matter and end up with something that looks like biochar. But unless you take it to a lab (and you likely will not), you won’t know much about its properties or structure. Are there still harmful agents in there that could contaminate your soil?

The biggest challenge will be to perform this heating without oxygen—which is key to it actually being biochar. You may be able to reach the high temperatures with a homemade fire—around 1,000 degrees Fahrenheit or 500 Celsius—but doing so without oxygen would likely require a special stove or kiln designed for this purpose.

Plus, heating organic matter can lead to the release of gases that are toxic or harmful to the environment, like methane and carbon monoxide. It can also leave a residue of tar on the end product, so it’s not as simple as just heating up some biomass.

How Can Biochar Help the Environment?

Usually, when biomass (like plants) decomposes, much of the carbon contained in it gets released into the air as carbon dioxide—or under some conditions as methane, which is even worse for the environment.

But, through the charring process, carbon is contained in the biochar and biochar degrades very slowly in soil.

We don’t know exactly how slowly—and it’s going to vary—but it may remain in the soil for centuries.

So, environmentally, biochar can reduce the amount of carbon dioxide released into the air and, once it’s used as an amendment, sequester carbon in the soil.

Why is There Controversy Around Biochar?

Most of the controversy with biochar has been around its large-scale agricultural uses and not about its use in home gardens.

It has even pitted some environmentalists against each other, since some emphasize the environmental benefits biochar can provide through carbon sequestration while others are concerned that its use on a large scale would require mass amounts of trees and other plants to be grown for the sole purpose of being cut down and turned into biochar.

There have been other issues too, including the way that biochar has been promoted to poorer developing regions even though tests haven’t produced reliable results.

And because the scientific studies have been inconsistent, both supporters and critics of biochar can find research that supports their position.

Where Can I Buy Biochar?

Good question. I would check at local garden centers / plant nurseries as well as doing searches for mail-order businesses. Because we haven’t tried it ourselves, we have no recommendations to make.

Estimate how much you need and what it will cost. 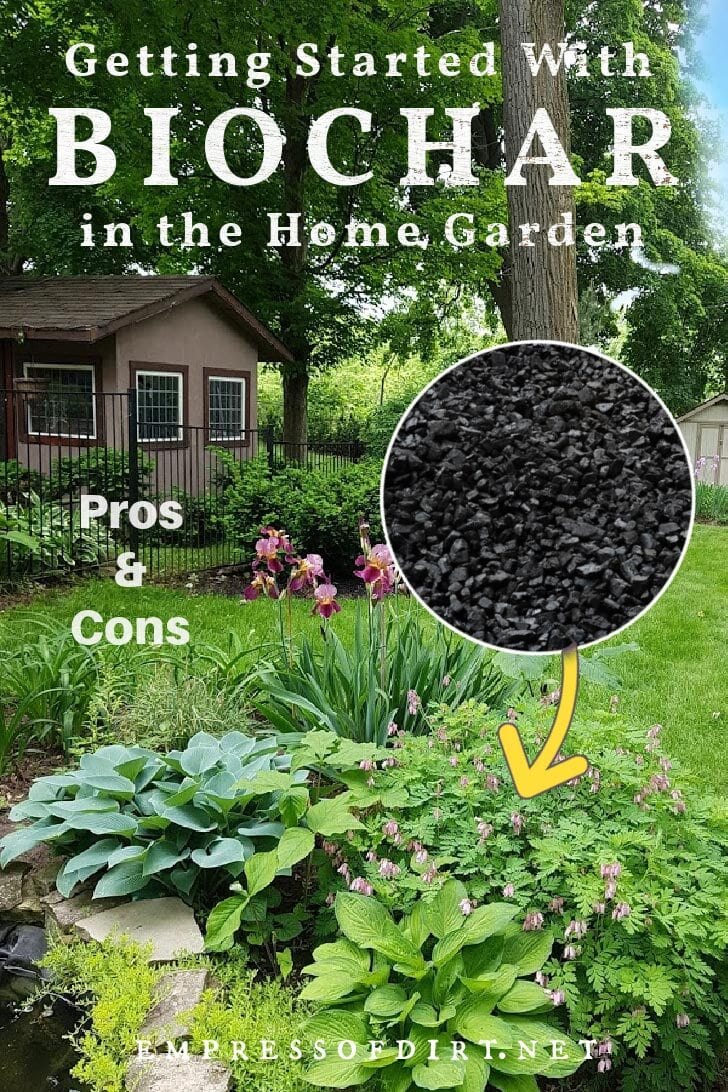