There are many trees and shrubs to prune in late winter while the plants are still dormant and before the warmer weather returns. I’ve included a checklist of winter plants you can save for future reference.

I have also covered What to Prune in Fall and this shows exactly what tools to choose for each job.

Winter is optimum pruning time for a lot of deciduous trees and shrubs. Examine your garden in fall after the leaves have dropped and note which plants will need your attention in winter when it’s pruning time.

The best time, specifically, is late winter, while the plants are still dormant, a few weeks before buds start swelling and sap starts flowing again.

When is Late Winter?

Late winter is 4 to 6 weeks before spring thaw begins. This could be any time in January to May, depending on your climate.

Use your average last frost date and count back.

Trees and Shrubs to Prune in Late Winter

This list is for cold climate gardeners, who have four-season gardens with a dormant winter stage.

Again, don’t prune because you think you should: prune for specific reasons. If you don’t have a clear idea of what’s needed, take photos. Your horticultural society or an online tree or gardening forum may have someone to help guide you.

*SAP NOTE: Some trees will drip a lot of sap if pruned in late winter: maple, elm, birch, dogwood, walnut, are some examples. It does not affect the growth of the tree but it can look unsightly. If this is an issue, wait until summer to prune. These are also the same trees that you can tap for syrup-making.

Use this list as a general guide but always look up your species before pruning.

The general guideline is: prune trees and shrubs in late winter that need it so long as they are ones that don’t flower in early spring.

I can’t list them all—there are too many—but here’s some:

Not all trees or shrubs benefit from pruning, or should be pruned at this time of year, so before you grab your pruners or pole saw, there are a few helpful tips to know first.

If you’re just looking for a simple, quick formula, this is it:

The trees and shrubs we prune in late winter—if they need it—are deciduous plants that drop their leaves in fall, and, specifically, those that do not flower in early spring. Any that bud or flower in late spring and summer, are good candidates for winter pruning.

We avoid winter pruning of spring-flowering plants because they already have their buds (that will be become blooms) and to trim them away means missing out on a flowering season.

But, most trees and shrubs are suitable for late winter pruning including apple trees, butterfly bush, tulip trees, and viburnum .

I mentioned in What to Prune in Fall that dead, damaged, and diseased branches can and should be removed at any time of the year. They aren’t going to get better and they are not doing the rest of the plant any favors.

In late winter we also prune for additional reasons.

We prune to improve or guide the structure of a plant, so it can be its best self, as some may say, keeping it both aesthetically-pleasing and healthy.

We can nip off suckers and water sprouts—those useless, finer protrusions that spring up from the root base or stems. They are wannabe branches that never mature.

It’s also an excellent time to deal with overlapping branches that rub against each other, before they cause damage to the tree.

And, we can thin out congested areas, usually in the lower middle of a shrub, where excessive growth makes it impossible for air to flow through when the leaves are full.

The goal is to have a healthy, well-structured plant that looks great and lives a long, productive life.

If you don’t know what tree or shrub you have, find out first. While we can list general rules for pruning, there are unique exceptions for many species.

Also, when you know what you’ve got, you can look up what a healthy, mature version of that plant looks like. That is very helpful for knowing what sort of pruning would be beneficial.

The Abor Day Foundation has a database of trees here.

2Are You Up For the Job?

There is plenty of pruning that most of us can do on our own. All those wayward twigs and sprouts are easy to remove with a good pair of pruners.

But any larger jobs involving heavy branches or overhead sawing may be best left to a professional arborist or tree surgeon.

3Learn How to Prune

As we said, much of the work will probably be obvious and straight-forward, but for any larger branch removal, it’s really helpful to grab some tips from the pros first.

I recently hired a tree surgeon and he had all sorts of smart tricks.

For large branches, he always performed several cuts before actually taking the branch down. His methods prevented the tree from tearing or the bark from peeling, lightened the load of each cut (making it easier to saw safely), and allowed the final cut to be flush at the branch collar for maximum healing.

There’s a basic hierarchy for pruning that makes the job easier.

Start with dead, damaged and diseased parts. Those should be removed first.

Next, any unwanted branches, starting with the largest, removed in sections. These may be overlapping branches or branches growing in the wrong direction.

Last, do the finishing up, removing any smaller bits that need to go: twigs, water sprouts, and suckers.

5Use the Right Tools

I never liked pruning until I had great pruning tools. Now I love it. There’s something about a nice clean snip that’s so satisfying (garden geek talk).

How to Choose the Right Pruning Tools for the Job will help you find the right ones for your tasks. Which pruners you use depends on the thickness of the branch.

I use basic pruners, a small saw, and an extendable pole pruner.

It will sound like overkill, but you can prevent the spread of disease if you keep a disinfecting solution handy whenever you prune.

This could be a 10% solution of rubbing alcohol, denatured alcohol, or household bleach with water (4 teaspoons bleach per quart of water for at least one minute).

I keep a rag and container of solution with me while I work and dip and dry the blades between cuts.

Always wear safety glasses: it’s just too easy for one twig to swing back and scratch your eye, as someone’s grandparent probably used to say.

Also be wary of overhead cuts: I use a pole saw from an angle so anything I cut falls to the ground far from me.

And forget the ladder. Work from the ground with the right tools instead.

It’s always recommended to do winter pruning on a warmer day. If nothing else, you’ll be more patient and do a better job if you’re not freezing your behind off.

How to Choose the Right Pruning Tool for Your Garden Jobs
Fall Pruning Tips: What to Remove Now
How to Safely Prune Hard-to-Reach Tree Branches
See More >> 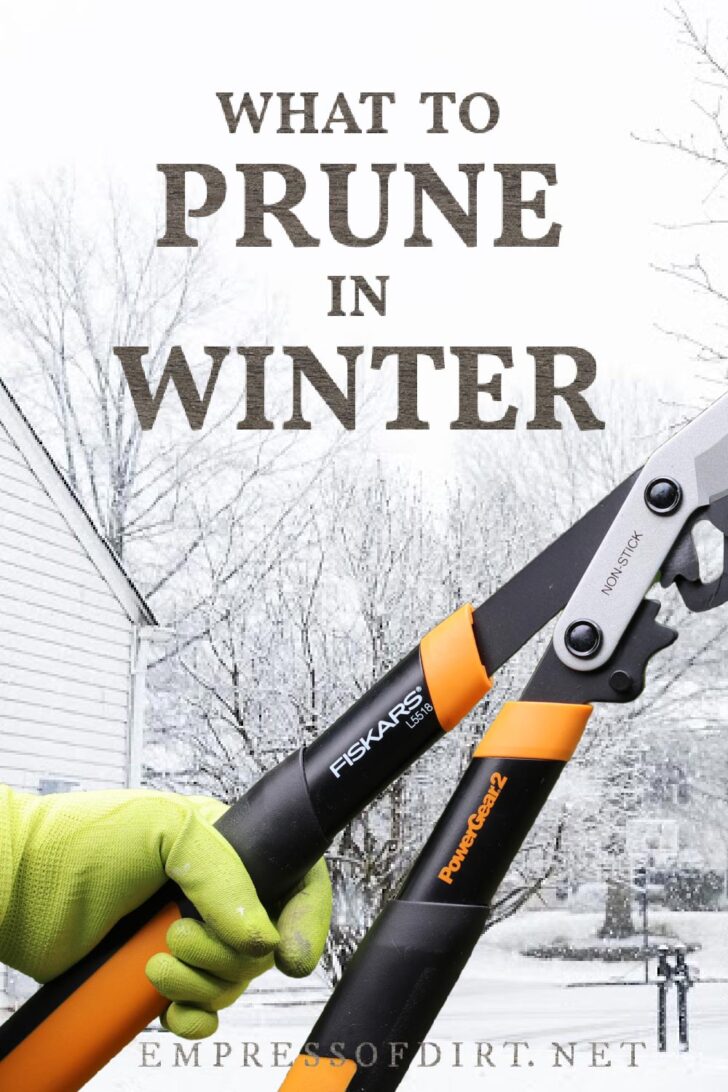