Hydrogen peroxide is recommended for all sorts of garden uses including seed germination and dealing with fungal problems. Let’s have a look at what is known and whether any of the popular tips may be reliable.

If you want to tackle gnats, see How to Deal With Fungus Gnats On Houseplants (What Works).

We recently wrote about dealing with fungus gnats infesting houseplants and found that these yellow sticky cards really can catch adult fungus gnats as they flit about.

Then, these questions came up:

The whole idea of using hydrogen peroxide for various garden uses likely originated from the fact that it does occur naturally in plants where it performs several important functions.

The idea that we can then apply it externally to plants or soil—in whatever amounts for whatever purposes—has not been studied in home settings.

This leaves us without any reliable information on how it might work (or how to apply it) and a multitude of home remedies filled with contradictory advice.

When you don’t have any solid evidence to show that something works, it doesn’t mean it’s a myth, it just means a lot more information is needed to fully understand it.

And, based on what is known about hydrogen peroxide, there are definitely limits to how much of it a plant can tolerate.

What Is Hydrogen Peroxide?

Due to safety concerns, full strength hydrogen peroxide has restrictions on how it can be shipped or sold.

The stuff we purchase for household use is highly diluted—usually 3 or 6-percent solutions.

For garden applications, the commonly shared recipes often recommend diluting it further so what’s applied may be as little as a fraction of one-percent of hydrogen peroxide.

This is not a recommendation for dosing, just simply an observation that gardeners seem to use a wide range of doses.

Hydrogen peroxide itself is not a foreign substance. Plants and humans naturally produce it on their own.

Hydrogen peroxide is also produced within seeds and plays a role in germination.

This is probably why some assume if the plant is doing this naturally, certainly we can trigger similar responses with external applications.

The natural management of hydrogen peroxide levels within plants is an ongoing balancing act.

Plants are continually producing hydrogen peroxide and have evolved systems for keeping quantities at levels that, for the most part, do not cause damage.

But, if levels accumulate and more is produced than they can get rid of or detoxify, plants may undergo significant oxidative stress where the excess hydrogen peroxide can damage DNA, kill cells, and other essential molecules.

So, yes, hydrogen peroxide occurs naturally in plants and plays important roles, but levels matter and excess amounts can be toxic.

Since hydrogen peroxide plays a role in so many functions within a plant, it seems plausible that we could manage or manipulate those levels with external applications.

But, as mentioned, we’re still a long way from having any real science-based information.

What you find online often starts with a valid kernel—like the fact that plants produce and use hydrogen peroxide naturally—and then jumps to presumptuous, inconsistent, or vague recommendations seemingly plucked from air.

Some recommendations don’t even acknowledge that household hydrogen peroxide is available in different strengths. Often they just say to dilute it—at who knows what level—and pour it on.

Knowing that plants are sensitive to various levels of hydrogen peroxide, it’s hard to imagine that we can take so many liberties when applying it and expect a certain outcome.

This is because it is degraded by light.

The product may also contain stabilizers which, it seems, manufacturers are not required to list on the label.

Once applied, it fizzes and quickly decomposes into oxygen and water.

Hydrogen peroxide can indeed kill lots of microorganisms including bacteria, fungi, and viruses. It is for this reason that it was a staple in household first aid kits for years until we realized that, while disinfecting cuts, it can also cause tissue damage.

We also know that it doesn’t kill all microorganisms all the time.

How effective it is depends on:

The result will be a reduction in the numbers of microorganisms, not a total elimination.

Because of the anti-microbial action, it is possible to use hydrogen peroxide to help disinfect clean garden tools.

Based on what’s known, it might—if conditions including the concentration are right.

But, it could also damage the seeds if the amount is wrong or applied for too long.

The problem is, we don’t know what levels or applications are right.

We already know a lot about what seeds need to trigger germination, but if adding hydrogen peroxide interests you, you could try your own A/B testing.

Another common tip is to pour hydrogen peroxide on your soil to “improve porosity” and “add oxygen to the soil.”

It’s a funny idea—likely inspired by the notion that the fizziness could elbow its way into soil to create little air pockets—but, there is no evidence of this. As far as we know, it’s not going to aerate your soil.

It’s also a costly suggestion—can you imagine how many bottles you’d need to douse your garden beds?

As mentioned, we know hydrogen peroxide can kill fungi and other microorganisms but whether it might work depends on a bunch of factors.

Could it stop a fungal infections like the ones that attract fungus gnats to potting mix?

It might. But there is no information on what concentration to use or what side effects it might have.

We also know that hydrogen peroxide is not selective about which microorganisms it kills. It would be nice if we could pick and choose which microbes it targets, but that’s not how it works.

There are also suggestions that hydrogen peroxide could be used to sterilize your soil—something that is rarely a good idea and almost never possible in this microorganism-filled world.

Maybe. But again, we don’t have studies to show how well it works, at what concentration it should be applied, and what other effects may occur.

It’s also hard to imagine how this could work given how fast it decomposes—unless you pour it right on to the larvae.

Thankfully, there are other steps you can take to tackle fungus gnats instead.

Many of the recommended uses for hydrogen peroxide in the garden are things that rarely need to be done and in many cases should not be done.

Tasks like using it to increase soil porosity or oxygenating soil are just nonsense.

Other things like killing gnat larvae or fungal infections might work in certain situations but we just don’t have the information needed to guide our actions, leaving us with home remedies that are haphazard at best.

Seed starting does fine when the basics are covered. This may include advance preparations like scarification or stratification and providing warmth and moisture at sowing time.

Using hydrogen peroxide to disinfect clean garden tools works, although there are likely better ways to do it.

We know hydrogen peroxide can harm plants and seeds when applied at the wrong levels—but we don’t know what those levels are, so hopefully any experimenting causes little or no harm.

And it’s always good to acknowledge that one’s own experience is anecdotal when no control studies have taken place.

Personally, I’ve never seen a valid reason to use hydrogen peroxide for any garden tasks or problems.

If this topic interests you, you may enjoy these articles on other garden myths, folklore, and remedies. 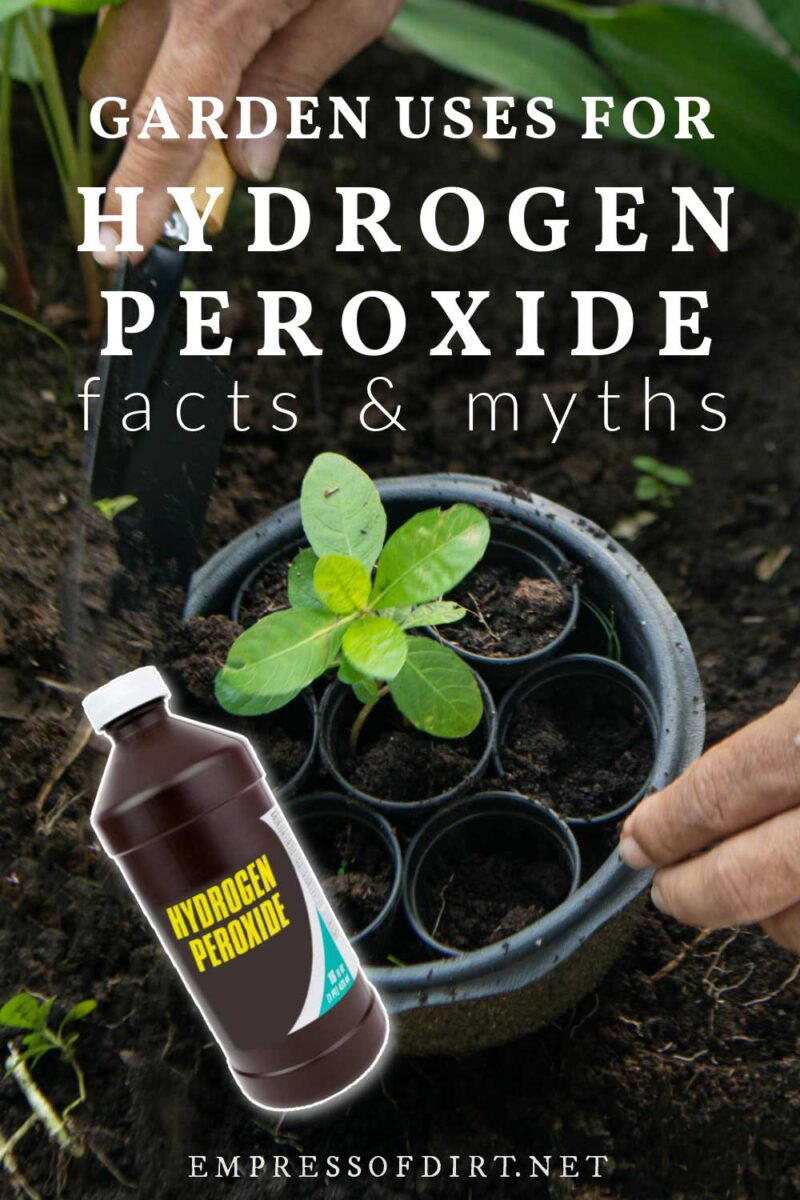